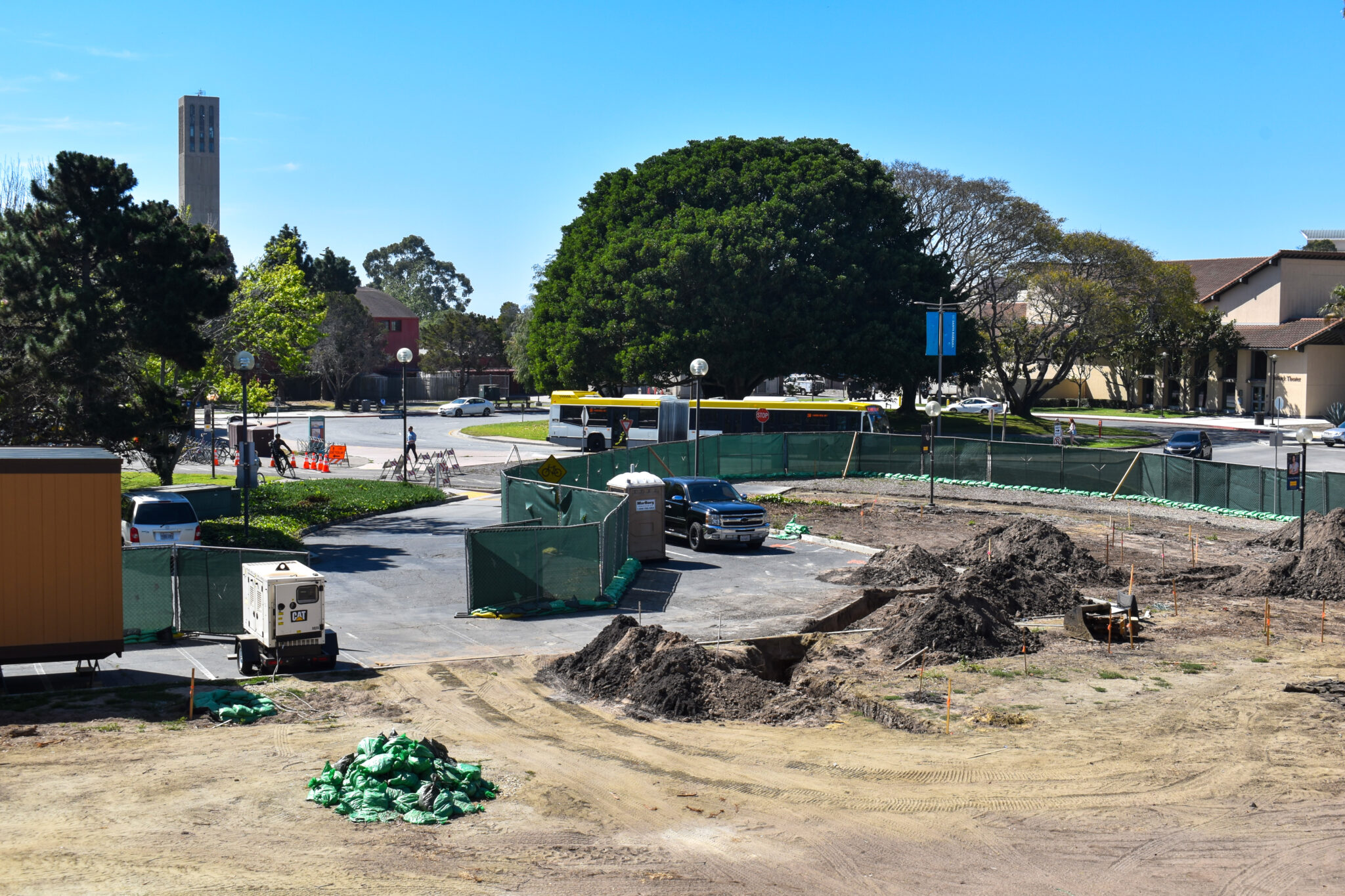 The project would take the $2 million the Bike Shop had accrued since 2006 and repurpose it for the entire NewCen. Shiuan Chang / Daily Nexus

The 2019-20 lead mechanic Bryant Hernandez expressed excitement at the doubling of space in the new Bike Shop, which he said would allow for 50 to 60 people to be in and around the building at the same time. An “adjacent seating area” would offer people waiting for their bike a chance to study and socialize, he added.

“It’s no longer a space where you see it as dirty, grimy, greasy,” he said. “But it’s a space of opportunity. It’s a space of connection, community.”

The path to breaking ground on the Bike Shop dates back to 2018, when then-Associated Students (A.S.) President Hieu Le proposed the NewCen — a $200 million renovation for the aging University Center — and planned to include a new Bike Shop as part of the building.

The project would have taken the $2 million the Bike Shop accrued since 2006 — funding from a lock-in fee specifically for the construction of a new Bike Shop building — and repurpose it for the entire NewCen to offset the total cost of the renovation.

The NewCen project ultimately went nowhere after students rejected the ballot measure in the 2018 A.S. elections with a 81.69% majority, and Bike Shop employees expressed displeasure about the lack of say the shop would have had in the plan.

But, the experience was a wake-up call to the employees of the Bike Shop.

“[The NewCen initiative] got A.S. student mechanics concerned about the agency and future of the shop,” said Bike Shop Coordinator Adam Jahnke. “That concern mobilized those student mechanics, at that time, to begin exploring how Bike Shop students would go about building a new shop.”

What followed was a four-year endeavor by employees to plan, fund and construct a new Bike Shop building — separate from all other projects and on their own terms.

UCSB alumna Morgan Kumlin, the Bike Shop student coordinator in 2018, laid the groundwork for the initiative by talking with campus and student leaders on beginning the project.

Kumlin said she found students and administrators whom she could rely upon. The problem was what to do when they left — she partly attributed a high turnover rate to the project’s slow going.

“We had some wonderful people on board,” Kumlin said. “And then when people left … someone else fills [the] spot, and it’s hard to build up that passion because it’s such an important project, but you need to be so deep in the Bike Shop.”

Kumlin herself left in 2018 upon her graduation. She entrusted the project to the people who remained at the Bike Shop.

“Being able to pass down the torch from mechanic to mechanic really was a successful effort,” she said.

UCSB alumna Madi Richards was next to carry the flame, overseeing the project as the Bike Shop lead mechanic in 2018 and 2019. She, alongside her colleagues, wrestled with choosing a place for the Bike Shop that didn’t conflict with existing plans and construction.

“It was really challenging to actually find a suitable location on campus for the new shop,” she said. “A lot of the areas on campus are either not accessible because future projects are slated to be built there, or they are not able to be used because of various logistical problems like underground gas lines.”

Richards and her team eventually succeeded in finding a site for the new shop, next to Parking Lot 15 and the UCSB Visitor Center.

“[The existing location] holds a lot of sentimental value and wonderful memories for me, but I also think that the shop is long overdue for an upgrade,” she said. “Those mechanics really deserve it, and the campus community deserves it. It’ll be a good thing for everybody.”

Hernandez left UCSB and the Bike Shop as a student in 2019 but soon returned as a full-time staff member at the shop in the role of lead mechanic. Richards graduated the same year and passed along the work to him.

“I’m super grateful for the previous senior mechanics and lead mechanics, Morgan Kumlin and Madison Richards,” he said. “When I was given that baton as the lead mechanic … that’s when I joined with Adam to really discuss and brainstorm and figure out, ‘OK, how can we wrap this up and make it happen?’”

One of Hernandez’s priorities was designing the new building with John Friedman Alice Kimm Architects, the firm the Bike Shop had selected for the project. He and his colleagues pursued this task to near completion, he said.

“From simply an architectural and design aspect, we really put thought into how we can best serve the UCSB community,” he said. “I think the amount of blood, sweat and tears and love, ultimately, that has been put into this project — it’s probably gonna be one of the most amazing and just unique bike shops you’ll ever come across.”

Fourth-year psychological and brain sciences and communication double major Gianna Pineda is the current senior lead student mechanic at the Bike Shop and an “anchor in this process,” according to Hernandez.

In the final years and months leading up to the Bike Shop breaking ground on its new location, Pineda and the rest of the employees also succeeded in getting all of the necessary approvals for the new building, Hernandez said. These approvals came from the planning, design and budget committees, the architects and Chancellor Henry T. Yang.

With administrator approval secured, there was still the issue of cost. The funds the Bike Shop accrued since 2006 — now $3.8 million altogether, according to Jahnke — were still not enough to pay for the project.

“We still were short,” Pineda said. “Building a new building is very expensive.”

To ensure the project would move forward, the Bike Shop had to ask for a loan from A.S. and remove several items from the new building, Pineda said. These items included a stone bench and fencing by the back patio staff lounge.

A.S. President Yuval Cohen had few reservations about the Bike Shop’s request for a loan.

“The students have been wanting this for so long that it seemed like a very minor thing to take out a loan because we still have that A.S. Bike Shop lock-in fee — it will be paid back,” she said. “So I definitely was very quick to approve that.”

Now, the work remains of constructing the actual building, and Pineda expressed optimism.

“I think that we’re moving on a really good track to have the building done by when it’s supposed to be done,” she said.

Pineda said that she hoped the new building would encourage regular students to take initiative in learning about and fixing their own bikes.