The student fees that would fund a proposed University Center renovation decreased slightly after students voted to allocate a roughly $2 million fund to the project, though part of the fees would still climb each year alongside inflation. 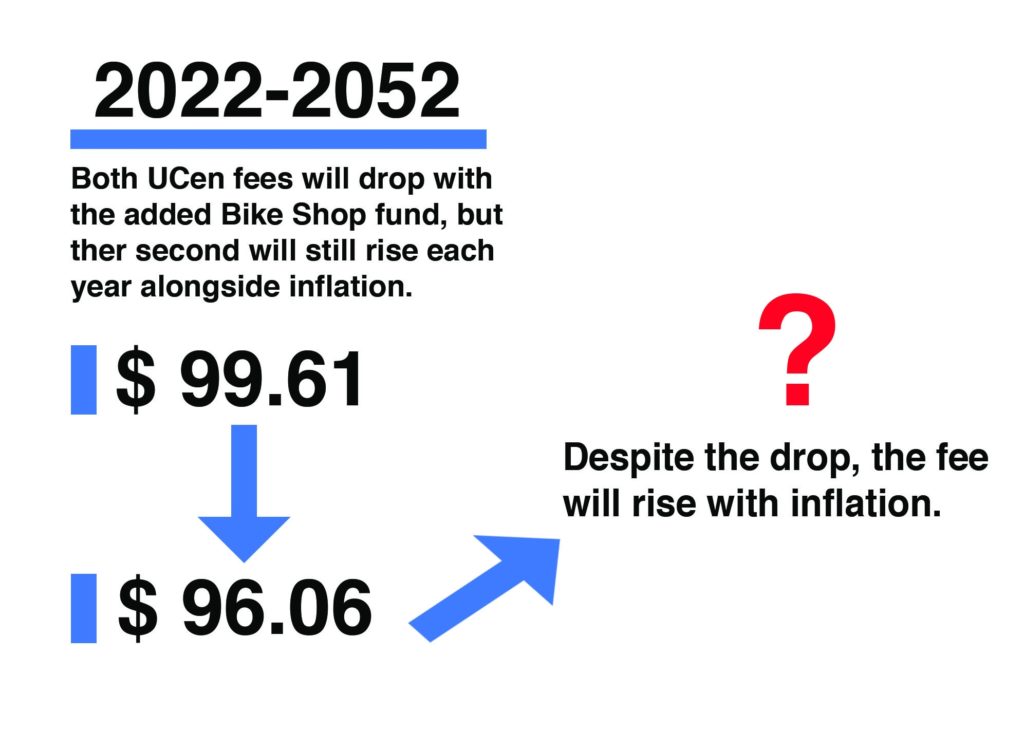 Not many other student fees at UCSB appear to be affected by inflation. For instance, the fee for the last UCen expansion, voted through in 1994, hasn’t risen from an initial figure of $20.42. Stephany Rubio/Daily Nexus

The Associated Students Finance and Business (F&B) committee voted on Feb. 26 to reallocate an existing fund for a new A.S. Bike Shop building toward a Bike Shop in the University Center (Ucen) instead. In late March, the Office of Budget and Planning provided updated calculations for the UCen fees.

Students voted to approve a new bike shop building fund back in 2006. The building has never been built and students continue to use the existing Bike Shop building to repair their bicycles.

With the Bike Shop funding now going toward the UCen renovation, the two student fees for the UCen project would decrease. The fees will be voted upon on the spring A.S. elections ballot.

Both fees will take effect if students vote to pass the UCen project later this month.

In the 12 years since the fund was created, students have paid the resulting $5.50 quarterly student fee and voted to reaffirm it every two years. The fee has generated over $2 million in revenue in the process, Maalizadeh said.

“We have this fee that’s being voted on every two years and that’s just sitting there to be used for a new Bike Shop,” Maalizadeh said. “[The UCen project] is the only plan that’s actually been proposed to use those student fees.”

After the Bike Shop is built in the UCen, the lock-in fee associated with it would expire. The current Bike Shop building, located next to Parking Lot 29 on campus, would be demolished.

Currently, the Bike Shop is housed in a 40-year-old cargo container that is “not meant for human occupation,” the official F&B reallocation ballot language reads.

“There are no bathrooms, the floors are rotting and it is a hazard to the students occupying the space,” the language reads.

While the UCen ballot petition language referred to two successive student fees, the second fee is not fixed. Instead, the fee will climb each year, roughly alongside inflation rates, according to a fee referendum document obtained by the Nexus.

Before the 30-year fee was adjusted for the Bike Shop reallocation, it stood at $99.61. But with inflation rates, the fee rises each year by a rate that ranges between just under 0.7 percent to about 1.17 percent.

As a result, the $99.61 fee increases to about $129.46 in 2052, the final year the fee would be in effect. That would push the total revenue generated from student fees to a number much higher than the $193 million the Nexus reported in early March.

Now, the $99.61 fee has been offset to $96.06, but inflation will still apply to the reduced fee, and the total amount of money raised from student fees will be much higher than $48 million, which is what officials say is the total cost of the project.

It is unclear at this time how exactly the new projected fees would be affected by inflation.

A.S. President Hieu Le did not confirm that the new amounts will rise by the same rates because no one has run the numbers yet, he said.

“Those figures haven’t been calculated yet for these new numbers,” Le said. “But we do know, with this new $2 million in place, what the initial figures are.”

Not many other student fees at UCSB appear to be affected by inflation. For instance, the fee for the last UCen expansion, voted through in 1994, hasn’t risen from an initial figure of $20.42.

The inflated costs are lower than what real inflation rates will look like over the next 34 years, UCSB economics professor Peter Rupert told the Nexus.

“Realistic inflation is going to be more like 2 percent,” said Rupert, who also directs the local Economic Forecast Project. “Right now it’s incredibly low, it’s the lowest it’s ever been.”

The UCen renovation, dubbed the “NewCen” initiative, was first proposed by Le in January. It would provide expanded office space to student services like Food Bank, Counseling and Psychological Services and Campus Learning Assistance Services. In addition, a renovated UCen would provide a 24/7 study space and a campus pub.

With the F&B’s reallocation, the finished UCen will also include a new A.S. Bike Shop.

Students can vote to approve the initiative with 50 percent plus one “yes” vote on the spring A.S. elections ballot.

A version of this article appeared on p.1 of the April 5 print edition of the Daily Nexus.

Currently, the Bike Shop is housed in a 40-year-old cargo container that is “not meant for human occupation,” the official F&B reallocation ballot language reads.

“There are no bathrooms, the floors are rotting and it is a hazard to the students occupying the space,” the language reads.

This was the old bike shop–there is a new shop on the site now that was built from this fund. It is still temporary space, but the old cargo container was removed several years ago.