After operating out of a temporary, run-down shop front for 14 years, the new UC Santa Barbara Associated Students Bike Shop broke ground on construction near Parking Lot 15 on Feb. 17. The building is scheduled to open in March or April 2023. 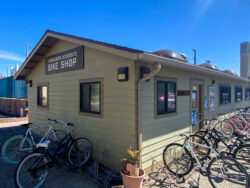 “It is a shack that is slightly dangerous,” Pineda said of the existing bike shop structure. “It’s super rickety, very tiny.”

Pineda said the new facility is a necessary improvement to better the store’s operations and ability to serve the student body.

“We needed a space in which we could expand our operations and therefore be able to take care of more students,” she said.

According to Bike Shop Coordinator Adam Jahnke, the Bike Shop built the current structure using materials from a building kit students in 2008 purchased from Sears. Now, the new Bike Shop will take a more professional approach. Its design comes from John Friedman Alice Kimm Architects (JFAK), while Cal-City Construction (CCC) will construct the building itself.

The Bike Shop selected JFAK in December 2019 after the UCSB Design Review Committee sent a request for bids from architects, Jahnke said. Five or six firms responded and gave presentations.

“In the end, JFAK very much spoke to a student-centric experience and understanding that this shop is being built with student funds, and students need to be the central voice within decision-making here,” Jahnke said.

He said that JFAK’s past experience with designing UC Los Angeles’ bike shop further increased his confidence that the firm could work well with university administrators and students alike.

Historically, the Bike Shop operated out of subpar facilities, Jahnke said. The original building for the Bike Shop — founded in 1975 — was made of corrugated steel shipping containers. The current building, located in Parking Lot 29, replaced that structure and has been in service since 2008.

“For all these years, it was understood that this space, this footprint we occupy next to the parking lot, is temporary — this site has always been slated for development,” he said. “So we have always had our building here on, more or less, borrowed time.”

A serious effort to build an adequate shop front, however, began in mid-2017.

“I had a pretty standout, exemplary staff [that] really got fired up about doing some of the initial ground and administrative work to start the conversation about what it would take to get a brand-new building,” Jahnke said.

The new building will address the most basic concerns around the current Bike Shop by resolving its safety issues and increasing the floor space of the shop from 1,500 to 2,665 square feet, according to Pineda and Jahnke.

Pineda said she hopes the new building will allow the Bike Shop to hire more employees and hold bike repair education nights, while Jahnke said he hoped the new building would help to increase the rate and amount of repairs they make and better manage waitlines. The new building will also improve the offerings of the shop, including a new bike test track — a replacement for test-riding a bike around a busy parking lot — and a DIY mechanic stand for students to self-repair bikes, Pineda said.

One feature that Pineda said she particularly looks forward to is a back patio lounge for employees to enjoy during their work breaks.

“You can step outside and not be bogged down by a bunch of questions by students, and you can just enjoy your break,” she said. “Right now, we don’t have that space in the shop — we have our staff couch area directly located next to our inventory, so it’s very cramped, and you always get asked questions by the other mechanics.”

Jahnke said that the Bike Shop was looking into offering more items for sale in the new building, from T-shirts to bikes themselves.

“[We’ll] hopefully be able to recycle bikes that were left abandoned in the community and then rehab them and sell them back,” he said.

Eventually, the Bike Shop may branch out to general transportation-related wares and sell items like skateboards and surfboards, he added.

A plot of land next to Parking Lot 15 and the UCSB Visitor Center will serve as the foundation for the new building. The Bike Shop chose this location out of 15 candidates for its high visibility when driving into campus, proximity to bike paths and the bus loop, spaciousness to play with the shape of the building and an opportunity for A.S. to interact with prospective students, Jahnke said.

But one location that was not an option was the current location of the Bike Shop, Jahnke said.

“We inquired about it, and the university — they have plans for this land already,” Jahnke said. “When that time comes, this building is gonna be demolished. This parking lot will be razed and there will be another entity here. When that happens is anyone’s guess.”

The total cost for the project is $5,028,095, according to Jahnke. The Bike Shop paid $3.8 million of that bill using funds that have accumulated since 2006 from a student lock-in fee allocated specifically for a new building. The remaining funds came from A.S. reserve funding, which Jahnke said the Bike Shop will pay back over time with future revenue from their lock-in fee — a fee that the student body pays yearly as part of their tuition and which it must vote to reaffirm every two years.

While Jahnke acknowledged that construction costs “tripled or quadrupled” due to the COVID-19 pandemic and its associated supply chain disruptions, he said that the Bike Shop did not want to risk further delay.

“We have to make this building happen,” Jahnke said. “Given this once-in-a-century pandemic, we just don’t know what the future holds. And so while we have the opportunity to do this now, it’s best that we do with these funds what we said we would do with them back in 2006.”

According to Jahnke, CCC is scheduled to finish construction on Dec. 8. Afterwards, the Bike Shop will move its existing equipment to the new location and buy new items to make use of the increased space.

Although the Bike Shop hopes to open its doors at its new location by April 2023, these plans could be hampered by prolonged construction.

“I wouldn’t be surprised if construction lasted, to some degree, into 2023,” Jahnke said. “And that’s just because COVID, as some or all may know, has very much interrupted supply chain availability.”

“This shop, from its inception in the ’70s, was such a radical thought about this community-oriented transportation repair perspective,” he said. “It’s been in the last 10, 15 years that the model that A.S. had pioneered and established is being duplicated across the United States through other not-for-profit and DIY bicycle spaces.”

“It’s my hope that this new space really lives up to its legend and mantle,” Jahnke continued. “Put people first and put ideas around climate change and transportation and repair and mobility at the forefront of the experience that’s accessible to all students here.”