The bike shop, located in the parking lot across from the Social Science and Media Studies Building, was never meant to be a permanent space, but repeated plans to move the shop have stalled over the years. 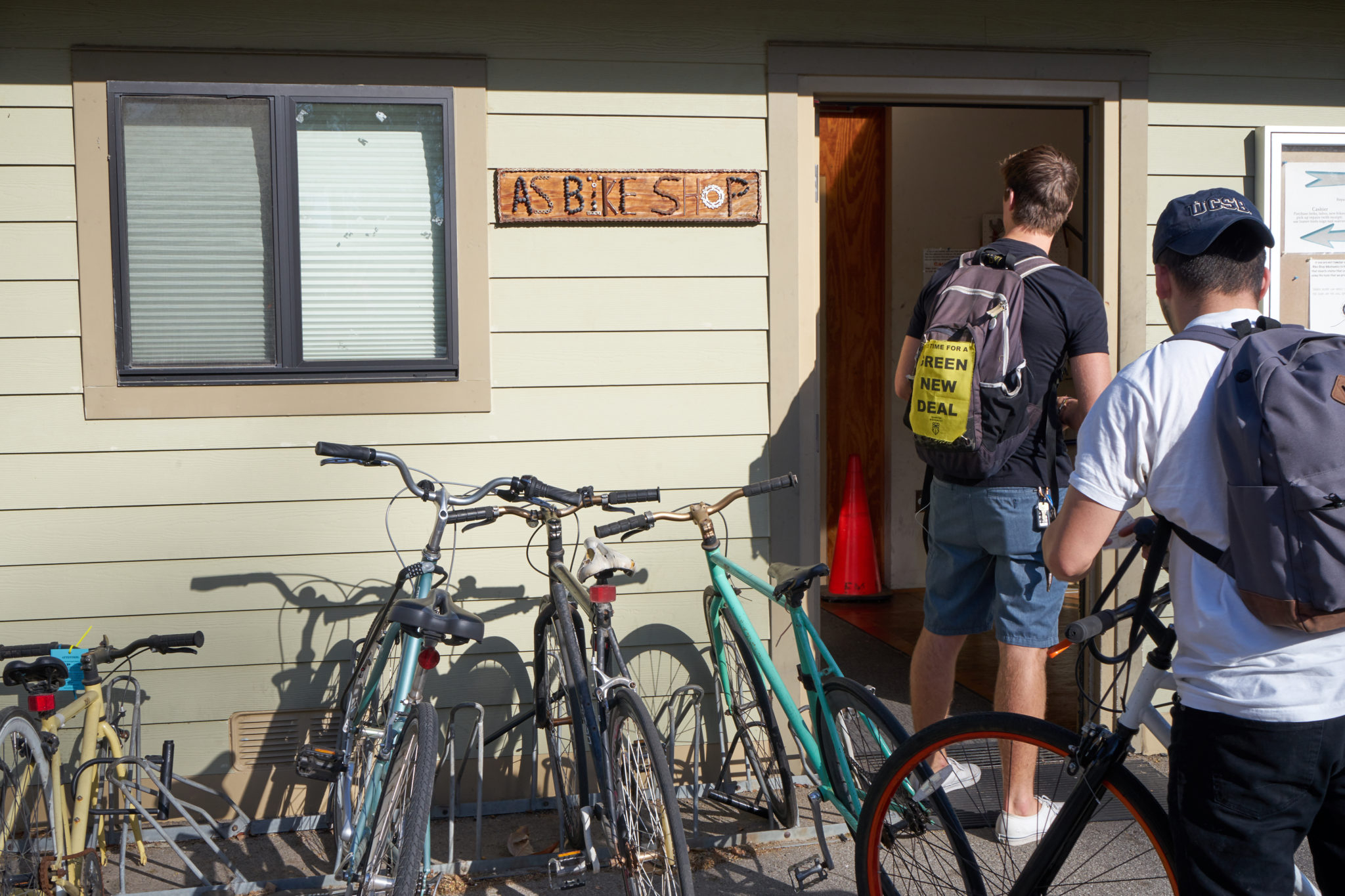 The search for a permanent location for the Associated Students Bike Shop, in the works since 2010, is now gaining ground again under President Alison Sir. Sophia Lovell / Daily Nexus

The current space is “cramped, inflexible, and inefficient,” and facilities can’t keep up with bicycle repair demands from a growing campus population in a space never intended to be permanent, according to the Campus Planning Committee’s report.

The Associated Students (A.S.) Bike Shop began its operations in 1974, working out of two corrugated steel shipping containers. The original facility had no running water or electricity, and structural decay posed threats to staff members and patrons, the report stated.

The current building was created in 2008 to replace the shipping containers, adding plumbing and electricity and addressing the most shop’s critical needs. But what was meant to be a temporary solution has now been in place for over a decade.

“We have tons of supplies and especially when it comes to fall quarter, we get extremely busy and it’s kind of hard to help others in maintaining their bikes because we can’t house that many bikes here, which we do in case people don’t have time to stay with us until their repair gets done or if it’s a little bit [of a] longer repair,” Franco said.

“The community keeps growing, but the shop stays in this constant space that doesn’t allow us to help out the growing community.”

The current attempt to find a permanent space for the bike shop is not the first. Previous A.S. presidents have incorporated plans for the space into redesigns of the University Center (UCen). Most recently, in spring 2018, President Hieu Le introduced a ballot measure to pay for the UCen redesign that would include a dedicated space for the bike shop, but when students voted not to move forward with renovations, the bike shop plans fell through.

It wasn’t until A.S. President Brooke Kopel, who served during the 2018-2019 academic year, took office that plans moved forward for a bike shop entirely separate from any other designs.

Kopel met last year with Mark Nocciolo, director of the Office of Budget and Planning, to discuss designs and locations. Nocciolo and Kopel intended to submit plans for the bike shop during spring of last year but were unable to when the last two campus planning committee meetings of the 2018-2019 year were cancelled.

The project has since moved forward into the current year, with current A.S. President Alison taking over for Kopel.

“They both have that sort of real conviction to get this done,” Nocciolo said. “And we’re doing all we can to make that happen.”

The committee for the bike shop’s permanent location is a collaboration with Sir, Nocciolo, others in the Campus Planning Committee, Vice Chancellor for Student Affairs Margaret Klawunn and employees at the bike shop. The committee created a list of space needs for the building and new location, including bike path accessibility, a garage door, a safer location for test riders than the current parking lot, increased indoor space and bike-specific storage.

While the Campus Planning Committee has opened the search to 11 sites, which may increase when an architect is hired, the bike shop identified four locations they would prefer: by the Thunderdome, by the Student Affairs Building, by the UCSB bus loop and in the Old Gymnasium Building.

Of these four, Franco expressed that the Thunderdome is the preferred location of bike shop employees.

“It already has some good plumbing and electricity situations, which would make it really ideal, especially because since it is on campus, it would make a really easy kind of for everyone since it belongs to the school,” Franco said.

While the bike shop supports the Thunderdome location, Nocciolo has purposefully kept the location list open instead of recommending one for the Campus Planning Committee at this stage in the project.

“In our project proposal, we included all the sites that we looked at, and we did that so that the committee would recognize that this is a process that is going to have more than one set of eyes looking at it. We felt as if it made more sense for the committee to see the array of possible sites rather than saying it’s this site or that site or this other site,” Nocciolo said.

While Nocciolo saw the immediate importance of a permanent shop location, he believes architects and the Campus Planning Committee must take into account the long-term growth of the university.

“Students are instrumental in this activity; we will definitely want to have a committee involved, and students are always a part of these things. Student funds — they need to have a say. But we also need to have our eye on the long-term interests of the institution. We have a long range development plan that is going to live beyond us,” Nocciolo said.

“We want it to be in a place that makes sense for the long term so that it is indeed permanent and that we’re not asking to have it moved again. We don’t want to forego any future development that would be really important to the academic program.”

The university is also currently discussing master circulation of pathways, sidewalks, bike paths and roadways, according to the report, so Nocciolo doesn’t want any current bike shop plans to get in the way of other development projects in the works.

Now that an architect has been hired, Nocciolo says it is a “realistic goal” to have the project approved by the Campus Planning Committee by the end of the academic year, so construction can commence during the summer.

“The bike shop should grow as the community of biking grows. We see more and more students come in with bikes every year, but [our current location] is slowly limiting the amount of people we are able to help.”