The Daily Nexus
Student Gov
Students Would Pay Close to $200 Million for New UCen
March 8, 2018 at 12:01 am by Shomik Mukherjee

Officials say a proposed University Center renovation plan would cost $48 million, but students could pay more than $193 million if the project ever becomes a reality.

A.S. President Hieu Le and Vice Chancellor of Student Affairs Margaret Klawunn have said that the project would cost $48 million.

“We designed a project to be able to address as many needs as we can and in the most cost-effective way,” Le said. “That’s the number that we came at: $48 million.”

Le worked with the UCSB Office of Budget & Planning to come up with the fee amounts and project the overall cost of the project.

“The total cost is $48 million and we expect to raise donor funds that would defray the total cost of the project,” Klawunn said in an email.

However, that amount applies to just part of the overall cost. Students could pay four times as much after adding in all the proposed fees. 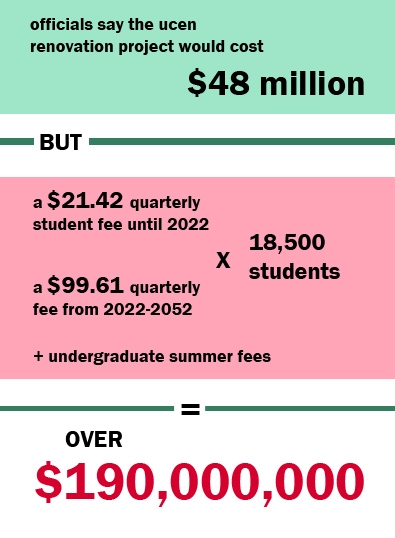 The math above doesn’t figure in the gradually increasing number of enrolled students, who would all funnel more money into the project. Melanie Voskanian/Daily Nexus

The math still doesn’t figure in the gradually increasing number of enrolled students, who would all funnel more money into the project. Even with outside donations, the amount students would pay in fees still far exceeds the $48 million total that officials have mentioned.

The fees would also include administrative costs, which would go to A.S., UCSB administration and financial aid distribution.

The “NewCen” project, which Le first introduced in late January, would bring the UCen a 24-hour study space, a project laboratory, expanded office space for campus organizations and a central pub.

Le contends that the time is ripe to “revitalize” the facilities because the UCen was last renovated back in 1994, when UCSB held 8,000 fewer students.

“The revitalized complex is envisioned as the heart of campus by the UCSB lagoon where students can congregate, eat, socialize, study, work, debate and collaborate,” the petition reads.

If Le can secure 3,116 valid signatures by March 16 and the UC Office of the President gives approval, the NewCen will be placed on the Associated Students elections ballot this April. Then, students could vote to pass the fee by a threshold of 50 percent plus one voter. The fee would take effect in the 2018-19 school year.

The earlier, $21.42 fee is for students who would never see the results of a UCen renovation. Over the following 30 years, UCSB students would continue paying for the renovated building, which would be finished by 2022.

At Wednesday’s A.S. Senate meeting, Le said that it is still “entirely uncertain” if student fees will be needed to pay for the project at all. He mentioned that he may have a “unique opportunity” to work with “big donors” who could offset the total cost of the project.

First-year history major James Ferraro, who has followed the project’s early development, also estimated a $190 million cost for the project when he spoke at the Senate public forum.

While the UCSB Office of Development could contribute to the funding, there is a cap to the amount the office could give, Ferraro told the Nexus.

In the “best-case scenario,” the office would put $35 million toward funding the renovation, Ferraro said, citing Le’s own estimation at a recent organization meeting. Realistically, the office may contribute between $15 and $35 million.

A version of this article appeared on p. 1 of the March 8 print edition of the Daily Nexus.

In the past 30 years, the UCEN and environs have experienced major upgrades twice. There is teaching space on campus that is unchanged (and quite delapidated) for those same 30 years.

Just so you know. Margaret Klawunn does not even know basic math. She makes things up as she goes along.

Did Marisela put him up to this?

WHY is AS so persistently trying to convince us they need new spaces lol. No one respects them and what they do

I’m still pissed they got rid of Wendy’s in the UCEN. Would love to crush some chicken nugs and JBCs in there again.

Let’s not forget that the UCEN is in huge DEBT right now.

Do the students that pay for this project get a say? Because I’m fed up with the high cost as is, do something meaningful. The UCEN of fine it’s half empty most of the day anyways.

Some random dude from AS was going around with a petition, and a lot of students blindly signed it.

There are no “big donors” lined up for this. Le is full of shit and the entire campus community will be stuck footing his bill