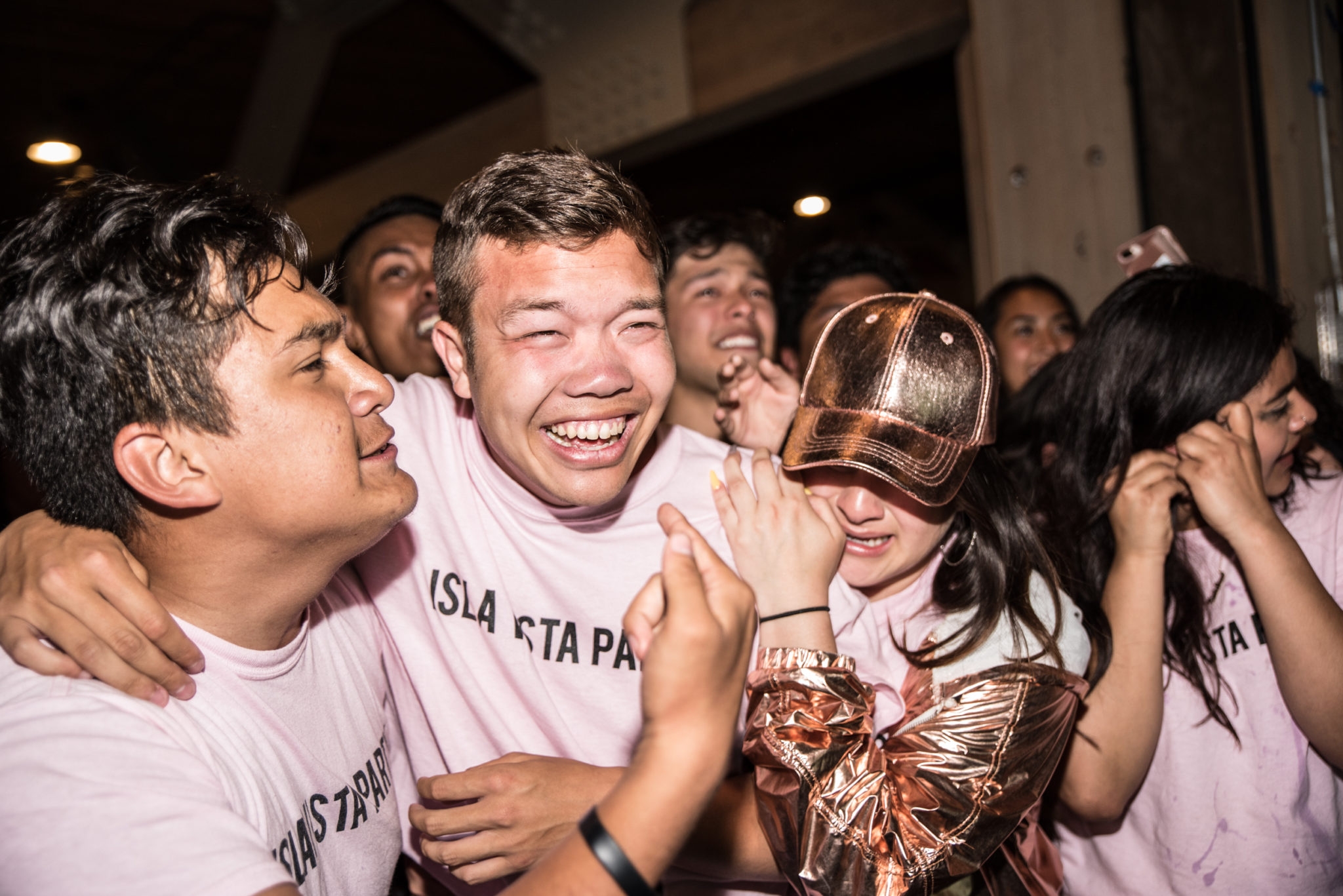 This is the first year the Isla Vista Party (IVP) won executive seats in the election since the party’s creation last year. Across the previous two years, Campus United (CU) had won seven of the eight available partisan executive seats.

According to A.S. Election Board, 8,233 undergraduate students, or 39.7 percent, voted in the election. This is the highest voter turnout since 2014.

Students voted against the NewCen renovation project with an 81.69 percent no vote. The project had drawn widespread controversy across A.S. and on social media, largely due to the project’s costs.

“I’m really excited and thrilled that the students had the opportunity to voice their opinion on this issue,” said Hieu Le, current A.S. president and one of the project’s primary supporters. “We need to listen to what the students have to say in terms of supporting a different funding model for it, and that’s something that I stand by.”

Brooke Kopel was elected as the next A.S president and is the lone executive candidate elected from CU.

Justice Dumlao, the Isla Vista Party’s candidate for president, said he is undeterred by the loss.

“It’s not as tough a loss as I think a lot of people think it was,” he said. “People really showed up for us. We had a lot of votes in every category; I’m super proud of all the effort everyone’s put in. It was never about me, and it never will be about me.”

Dumlao also said he will continue to make change on campus and said he believes the election has encouraged more students from all backgrounds to get involved at the university.

Sophia Dycaico of CU and off-campus senator lost to IVP’s Jeike Meijer by nearly 600 raw votes for external vice president of local affairs. Meijer has said she will be the first Native American to serve as a UCSB A.S. executive. Dycaico and Meijer declined to comment.

Rose Ettleson lost the vote for student advocate general (S.A.G.) against Grecia Martinez. Ettleson told the Nexus she was not “afraid of any candidate winning” because she believes everyone is competent and qualified.

“I’m ecstatic about the whole executive slate because every single one is going to do such amazing things. I’m obviously disappointed; I think Grecia will be a great student advocate general,” Ettleson said.

“I am relieved, ecstatic — it’s been a very long two weeks,” Martinez said after the win. She said she was excited to work with the current S.A.G., Jack Tannenbaum, to analyze statistics behind the election results to see where the students fall on campus issues.

At a somber post-election meeting, CU party leaders urged those who fell short of elected seats to remain hopeful and active.

“When I look at all of you here, as a fourth-year exec, you know what I see? I see the future of this fucking campus!” Kristin Hsu, the current EVPSA, told the party. “This is not Associated Students United, this is Campus United!”

“Whatever happened in there — fuck that!” she added.

Kopel thanked the CU staffers for their help in her victory and echoed Hsu in telling the party to not give up their fight.

“Campus United needs to stay united,” she said. “No matter what happens in there, we are the people who are best for this campus … We will come back again, and we will sweep again and again and again, no matter how long it takes.”

A photo story from the night can be seen here.

Please note that I would have no reason to say “Soviet Student Union.” I have been misquoted and actually said, “Associated Students United.”

Did you write that or was it Jonathan ?

Lol at all this “party” shit. What tangible difference has any AS senator for this campus?

“This is not Associated Students United, this is Campus United!”

It’s not about your party, it’s about the school. Maybe learn something from this year instead of saying “Whatever happened in there — fuck that!”

If it had gone the other way the other party would bitch like this too so shut the fuck up with all the hate already. NO ONE CARES EITHER WAY!!!!!

Daily Nexus you did a shit job of covering elections this year. First you take away your endorsement of the IVP candidate. How horrible that must have been for her to go through that. And then you intrude on what seems like a private moment for CU. How horrible it must be to read this for CU. If this kind of journalism continues I will be voting no on any ballot measure you are on next year. It is a shame for both parties to have to deal with idiot journalists who seem like they are just out there to… Read more »

100% agree. Absolutely HORRENDOUS coverage this election season. On top of intruding on a private moment for CU, the fact that you did not even have the common sense to understand Associated Students Union and interpreted it as SOVIET student union is just a prime example of how faulty, careless and half assed your coverage is and has been this entire election season. Absolutely voting no on any ballot measure you are involved in and will actively encourage others to do the same.

I agree. I usually don’t care about campus politics at all lol, but that article they wrote revoking their endorsement of the IVP candidate seemed borderline slanderous. It makes me sad because I really did like the Nexus, but their election coverage makes it seem like they just want to create drama so people will read their articles. It was like reading a tabloid.

Hi, I assume you are from CU. The Nexus had every right to revoke their endorsement after it was shown the candidate had organizational issues. Likewise you expect privacy when running for office? What fantasy land do you live in? Also it is important for students to know that quote because Associated Students actually is everyone, not just government. Read the handbook. When you say it’s Campus United it sounds like party before school. No wonder they lost.

The nexus revoked an endorsement of the IVP candidate not CU’s candidate?

CU wins half the seats and throws a temper tantraum like they got swept, so much entitlement smh.

I don’t think it is sociopathic at all or should be deemed as entitlement. Not in a political party but if I was in either one I would want to win all the seats or “sweep”. Both parties should have this mentality especially because they worked their asses off. Probably just Nexus taking it way out of content or maybe since Campus United has been in the game for a longer time? Just my opinion!

Most of the country’s best newspapers endorsed Hillary Clinton. Does that make them irrelevant, too? Endorsements aren’t meant to be oracles and as 2016 showed, people don’t always heed good advice from journos.