The Office of Black Student Development — created in 2020 to fulfill the Black Student Union’s 2019 demands — held a community preview of its office suite located within the Student Resource Building on Feb. 19 over Zoom. 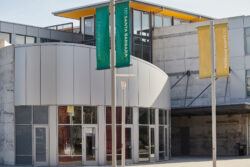 The space, which offers a physical location to support and advocate for Black students, will be open to the campus community beginning April 30.

“This office is yours,” said Claudine Michel, a professor in the department of Black studies. “You have earned it. It’s a center for your academic support. It is a center to support your wellbeing. It is a center to help you transition to the workforce and become responsible citizens. It is founded in our Black radical tradition. It’s full of history.”

A month afterward, Yang promised $900,000 toward the creation of the Office of Black Student Development (OBSD) and funding for eight paid positions, five of which have been filled. While the new office suite within the Student Resource Building marks the creation of a physical space for Black student services, it does not meet the BSU’s original demand for the construction and use of a separate building named after civil rights activist Malcolm X.

“At OBSD, student services, resources and advocacy work together to create a positive learning environment and foster a sense of belonging and purpose,” Pinks said at the event.

Yang commended the students, staff and alumni who contributed to the founding of OBSD.

“I want to say thank you to all of our staff and students for your courageous leadership and advocacy,” Yang said. “Your collaborative efforts helped to make this office a reality. I’m confident that the important work of OBSD will make a meaningful difference.”

“UC Santa Barbara continues to work on raising excellence, diversity, equity and inclusion across the entire campus,” he continued.

The office space consists of individual offices for five staff personnel, a multifunctional community workspace and a breakroom. The breakroom, where staff and interns traditionally have lunch, will also be stocked with snacks and pantry items for the benefit of any and all Black students.

“This is not only a space for the staff and the students who work in the OBSD,” Pinks said. “It is also a place for food security to ensure that our students have a place every day that they can come and get something nourishing and fulfilling to eat.”

Katya Armistead, assistant vice chancellor and dean of student life, expressed her excitement in seeing the long-awaited creation of the OBSD office become a reality.

“This department has been needed for so long to support our Black students, so I am just so pleased and excited and so happy to be here to help,” Armistead said.

The effort to establish the OBSD is built on the past advocacy of Black organizers, students and faculty at UCSB, notably those involved in the 1968 Takeover of North Hall and the 2012 and 2019 BSU Demands.

The 1968 Takeover — an occupation of North Hall incited by 12 Black students protesting racism and systemic inequities — led to the founding of the Center for Black Studies Research and the department of Black Studies at UCSB. The institution is the second university in the nation – following San Francisco State University – to create a department dedicated to the study of the Black diaspora and experience.

Michel, the first tenure-track Black woman to be hired at UCSB, said that the historic act of civil disobedience marked a critical moment in the broader “freedom movement” at universities across the country.

“We were the second one after San Francisco State University to create a Black Studies Department, and it was part of a freedom movement, a freedom struggle that had started way earlier, when the students compelled universities throughout the nation to open up their curriculum, and they were challenging this cyclic exclusion, marginalization and oppression of Black people within and outside the academy,” Michel said.

2020-21 UC Student Regent Jamaal Muwwakkil, a second-year Ph.D student in the linguistics department and president of the Black Graduate Student Association, said he hopes that students form a desire to continue campaigning for racial justice in reflecting on past advocacy efforts.

“I am situated in a tradition, in a history of students who have said, ‘This is not good enough, and I’m going to do something about it,’” Muwwakkil said.

“I want to encourage all those who would be undergraduates and graduate students on our campus to see themselves as well-situated in a history of advocacy and progress, with a subtle sense of obligation to do something with this opportunity that we’ve been given,” he continued. “After each iteration of advocacy, each generation, the floor raises. We start from a higher position than our forebears did, and we have an obligation to continue to raise that floor.”

Yoel Haile, director of the Criminal Justice Program at the ACLU of Northern California, graduated from UCSB in 2013 with degrees in Black studies and political science, and helped negotiate the 2012 BSU Demands.

“It’s very exciting to see from where we were back in 2012, in the initial demands that my comrades and I worked on at that time, to all the things that you all have done to present day to getting us to a point where we can have a full office,” Haile said.

Haile expressed how OBSD’s ability to provide a specified, physical space for Black students to organize is crucial for future advocacy.

“We used to only have the AdCRC [African diasporic Cultural Resource Center] where we did everything. Every Black-zoned group would meet there. We would have to kick some people out just to have a quiet, private meeting about the demands because there was literally nowhere else for us to go sit and conspire and plot what we want to do with our demands,” he said.

“I know that our students also realized that getting an office, if we didn’t have the dedicated staff that were going to carry that mission forward, was not going to mean enough. Like [Michel], I admire the audaciousness of the task and really appreciate that the chancellor came through with eight positions for the Office of Black Student Development,” Klawunn said.

Klawunn also recognized persisting shortcomings by UCSB and the continued work that administration must do to meet the needs of its Black campus community.

“Even with good intentions, we don’t keep up with the needs of our students, and often our students are then pointing the way for us towards the next steps.”

Likewise, Haile pressed students to be leaders in this charge for progress and build upon the work started by generations before them.

OBSD will hold a ribbon cutting ceremony on April 30 from 9 a.m. t0 1 p.m., officially making the space public to the campus community. At the ceremony, the Educational Opportunity Program (EOP) will also announce the scholarship recipients of the Allison Jackson Memorial Scholarship and the minority Alumni Scholarship Fund, according to EOP Director Aaron Jones.

“I have over a 30-year history associated with this campus, and it’s an honor to see this latest development on the continuum of Black student activism on campus beginning in 1968, and continuing on through to the present day,” Jones said.

“I would only say that this is not an endpoint,” he continued. “This is not a static point. This is part of the progression of activism that will continue. I am very, very excited to work alongside OBSD. I think we’re going to be joined at the hip in a lot of ways in supporting our Black students, and we’re really excited about this collaboration.”

Correction [2/28/2022, 5:05 p.m.]: The article has been corrected to state Angela Cantu’s position as the business officer for OBSD rather than business counselor.