The Daily Nexus
News
BSU Releases Demands to Address Black Student Resources and Success
February 14, 2019 at 12:02 am by Sofía Mejías-Pascoe

UC Santa Barbara’s Black Student Union released a set of demands on Feb. 8 for the university to fulfill, which includes eight new paid positions dedicated to fostering black student success on campus and the creation of a building specifically for black student development. 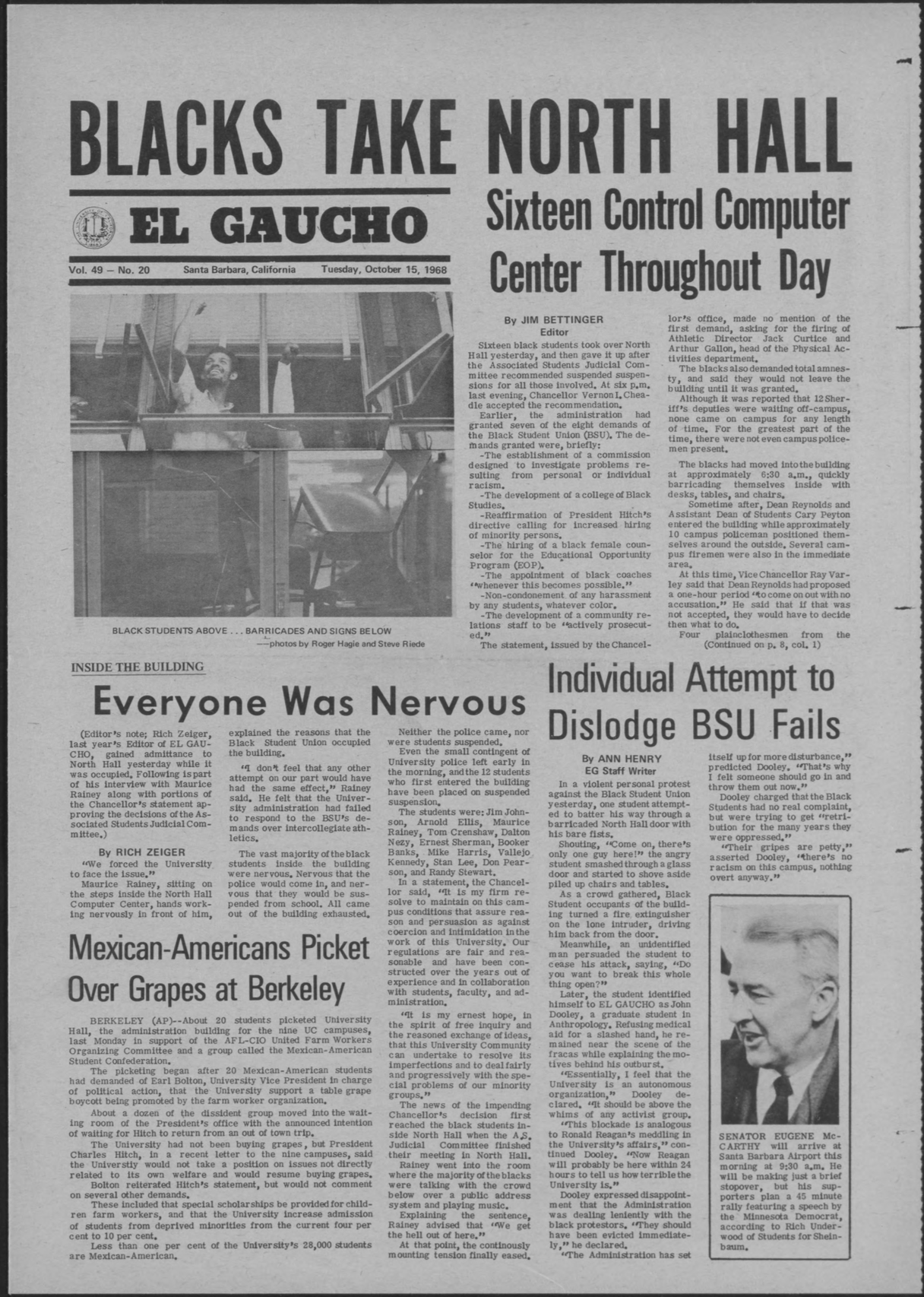 These demands build upon previous ones that Black Student Union (BSU) presented to the university, first in 1968 and again in 2012. The most recent demands aim to address “structural hindrances on the development of Black UCSB students,” according to the list of demands authored by the BSU Demands Team.

“Black students must continually fight to have their humanity recognized and appreciated, which takes time away from students’ abilities to study, learn and become wholly involved as campus community members,” the team wrote in the demands list.

“The University has continually been unable to fulfill Black students’ demands without the intervention of Black students on campus who address this inability,” the demands team wrote.

“The University’s reliance on Black student intervention in what should be structured efforts to support Black students is unacceptable.”

The Feb. 8 demands include the following:

BSU estimates the total cost of the demands to be about $900,000 and requires that this money be provided permanently by the chancellor’s office, as opposed to the Division of Student Affairs, and be allocated by February of 2021.

BSU also demands that the construction of the Malcolm X Center for Black Student Development begin within the same two-year period. This demand for a building for black students on campus was part of the 1968 demands set forth by BSU members during the North Hall Takeover.

“We believe that it is time that the University fulfill the commitments that it has claimed to have made to Black students throughout the course of the last 50 years. We want the entire campus community to know and hear clearly our struggle. We refuse to wait any longer,” the demands team wrote.

BSU met with Chancellor Henry T. Yang and other top administrators on Friday to present and discuss BSU’s demands.

Yang said he is willing to work with students in creating Office of Black Student Development in a statement he sent to the Nexus.

“I am supportive of the vision for an Office of Black Student Development, and have been working with students, faculty, and administrative colleagues to ensure that progress is made toward the first steps of planning for the establishment of such a significant resource,” Yang wrote in the statement.

The demands and information about the meeting were emailed to Nexus on Feb. 9. In that email, BSU expressed “frustrations” about an incident that had happened during the meeting.

According to the email, Maria Herrera-Sobek, associate vice chancellor of Diversity, Equity & Inclusion, made “disturbing and insulting” comments which “belittle[d] the struggle of Black UCSB students and Black people by minimizing the Black identity as a whole.”

While discussing BSU’s demands, Herrera-Sobek reportedly expressed her discontent with a previous black administrator, who she felt centered efforts on the black student community and lacked attention toward the Chicanx and Latinx student community, the email stated.

Herrera-Sobek also reportedly said during the meeting that she would have hoped the administrator spent more time focused on the Hispanic student community, adding that, “[W]e are all African,” according to the email.

“Black students across the board continue to be undervalued and underserved at an institutional level within university systems,” BSU wrote in the email.

“Our meeting [on Friday] proved how ignorant our own administration is to the plights of Black students.”

Herrera-Sobek said she apologized to the BSU members for the effects that her comments had in the meeting.

“I have communicated to the students that I deeply regret the remarks that caused them discomfort and made them feel marginalized,” Herrera-Sobek wrote in an email sent to the Nexus on Tuesday morning.

“I hope to have the opportunity for further dialogue with the students and to continue to find ways for my office and the university to support their needs and to address their pressing concerns.”

BSU said Herrera-Sobek’s behavior during the meeting was an “iteration of anti-Blackness” on behalf of the university, and something they said is familiar to the experiences of black students at UCSB and other schools such as Santa Barbara City College and California Polytechnic State University.

“It was troublesome for us to hear an administrator whose position is explicitly and solely dedicated to diversity and equity on campus use such apparent anti-Black rhetoric,” BSU wrote in an email.

A copy of the demands in full can be read below:

“Demand”? Immediately puts me off.

The BSU needs to be abolished. “Demands” – what are they… terrorists?

So when does it end? In 50 years will we still need this shit? 100 years? The answer is no if we’re ever going to become a society where race truly doesn’t matter. As long as there is a building built solely for black students then race will continue to be an issue.

For extra super fun, replace the word “black” with “white” throughout this article.

I recall in the early 70s that the BSU held everyone at an A.S. meeting hostage by blocking the doors and declaring that no one would get out until their funding demands were met. Looks like they are still “demanding” things today. They need new techniques.

Who the hell are they to issue “demands.” Imagine if the UCSB College Republicans crafted a list of demands and unilaterally insisted that the university cede to them. Instead, conservative students are attacked by the administration for lawfully exercising their First Amendment rights while radical leftists are allowed to run rampant. Or imagine if conservative students took over a building and threatened to destroy valuable property unless their demands were met. What kind of reaction would there be? Would administrators spout such pithy aphorisms about listening to students then? No, they would restore order, as well they should. Perhaps instead… Read more »

Segregation ended decades ago, by white people. Don’t bring it back at the behest of these racist black kids.

It is very typical for unions to issue a list of demands. Equating the black student union to terrorism is disgusting. The conservatives in the comments need to stop acting like their political affiliation makes them victims.

Absurd on its face. This is not 1968. It is 2019. In exchange for your tuition and fees, the university owes each and every student classes and an education. That’s it. The university is not here to hold your hand. Frankly, demands like these only serve to perpetuate a negative stereotype of black people, and none of us needs that.