The Daily Nexus
UC News
50 Years, 12 Students and the Takeover That Changed Everything
October 18, 2018 at 12:01 am by Sanya Kamidi and Sofía Mejías-Pascoe

Twelve black students chained the doors of North Hall, locked themselves inside and waited for 10 hours until they received word that their demands for change had been heard and answered.

This year, UC Santa Barbara recognizes 50 years since the North Hall Takeover of 1968, a protest that forced the UCSB administration and surrounding community to acknowledge the needs of black students on campus. 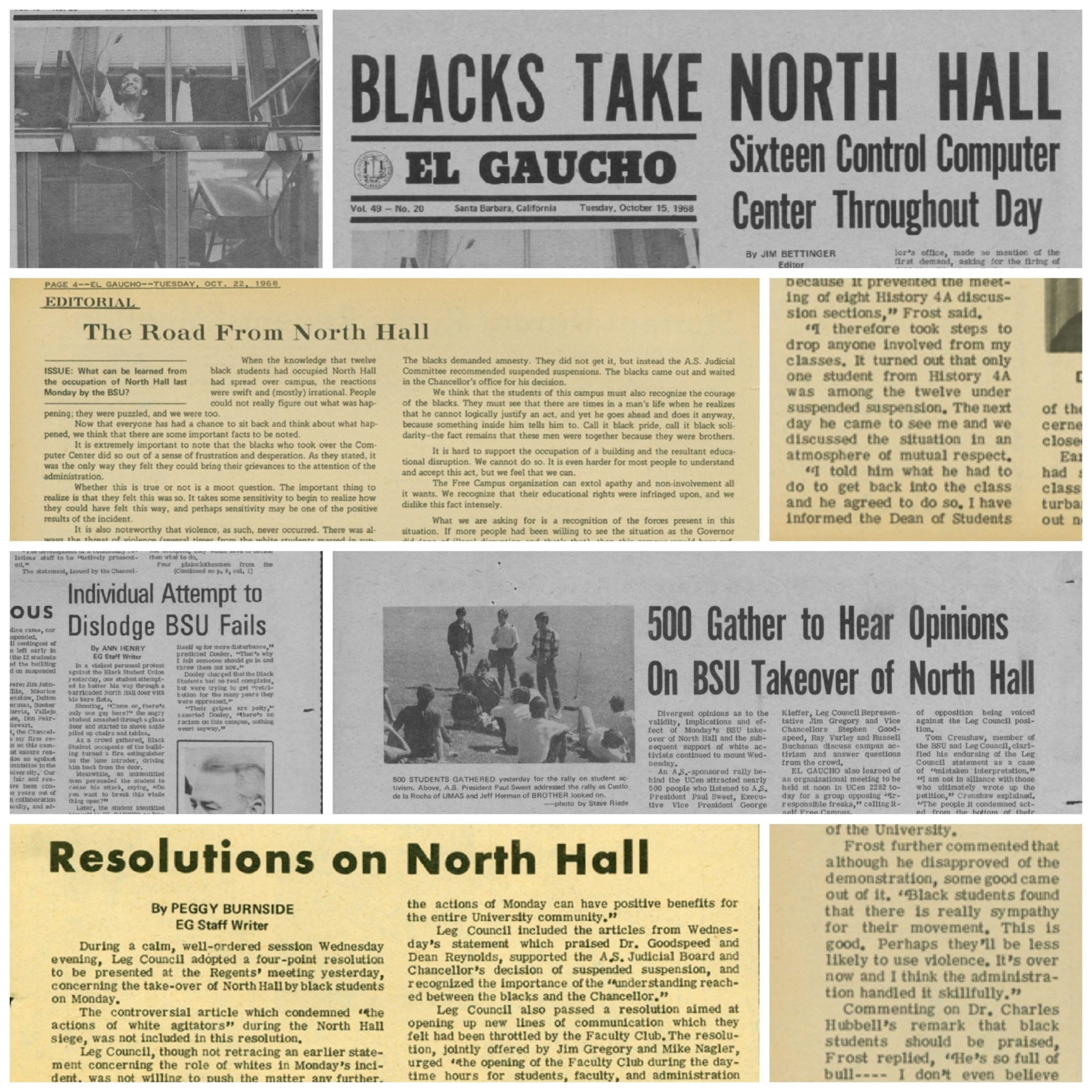 In response to the demands set forth by the protesters, the Department of Black Studies was established.

“I don’t think in retrospect that we fully understood or comprehended the significance and the lifetime gravity that that event represented,” Murad Rahman, chair of the Black Student Union (BSU) in 1968, said.

“We certainly by no means did we know and fully understand all of it … maybe until years and years after that, in my opinion.”

Rahman remembers the events of Oct. 14 that year clearly.

He and the 11 other students shouldered uncertainty, risk and, most of all, unwavering resolve as they took over North Hall.

At the time, North Hall held the mainframe computer for the entire UC system and was considered “the most critical point” of the campus, Rahman said.

Rahman and other students attended UCSB during a time of tumultuous social and political climate. Significant moments, such as the assassinations of Dr. Martin Luther King Jr. and Robert Kennedy as well as the rise of prominence of Malcolm X and the Black Power Movement, created the backdrop against which students experienced college life.

Being among the small number of African American students at the time provided a difficult environment to navigate, Cynthia Davis, secretary for BSU in 1968, recalled.

“There was a[n] identity crisis because we were such a minority there on campus,” Davis said. “Because of that fact, sort of being isolated like that … we tried to find ways where we could group together to support one another.”

BSU was an important avenue for African American students to support each other and discuss the challenges they faced as students at UCSB and a minority race in the 1960s, according to Davis.

Students of BSU worked to raise awareness about issues faced by African American students and fight for changes they felt would benefit their community and black communities throughout the nation, Rahman said.

Dalton Nezey, a football player in 1968 and one of North Hall Takeover participants, joined forces with Rahman and other BSU members in discussion about what the school needed to be doing better for its black students.

Several of those discussions revolved around the mistreatment of black athletes on the football team, which included the lack of financial aid given to black athletes in comparison to their white counterparts, the use of derogatory language by coaching staff and the general lack of respect black students were given.

“We felt that we were being treated differently, and … in that conversation about football, we started looking at the structure of the campus,” Nezey said.

These complaints, coupled with “racial insensitivity, [and] racial illiteracy” on campus as well as the national social strife at the time, were the final catalyst for the North Hall Takeover, Rahman said.

In secret – from the public as well as most members of the BSU at the time – Rahman, Nezey and other students devised a plan to secure the computer center at North Hall and demand changes at UCSB from the chancellor at the time, Vernon Cheadle.

BSU members located all the exits in the building, prepared for attempted infiltration from police and threats of violence. They also determined how they would communicate and negotiate with key players on the outside.

Even on the morning of the Takeover, some of the protestors, though resolved in their mission, were apprehensive about what the rest of the day would entail.

“We knew we were doing the right thing … the question was, how fearful were we of the consequences? That was the issue,” Thomas Crenshaw, one of the protestors, said.

“Were we fearful? Yeah, we were fearful. Were we afraid? Yeah, we were afraid. There were a lot of us who met to go into North Hall. Only 12 of us showed up.”

The 12 students arrived at North Hall around 6 a.m. on Oct. 14, when they anticipated the halls would be empty of workers and students. The protestors convinced the few technicians who were present to leave after explaining the gravity of the situation about to take place.

The students had coordinated a team on the outside to facilitate negotiations at the chancellor’s office while the 12 remained barricaded inside North Hall.

Booker Banks, another member of the 12 inside the building, addressed the crowd gathered outside the building throughout the day. He kept them both informed and entertained during the negotiations.

It was late afternoon when the 12 received word the chancellor’s office had agreed to the demands.

“It was a moment of celebration, a moment of relief because we didn’t know whether or not our demands were going to be met,” Rahman said.

50 years later, the North Hall Takeover remains one of the most significant actions take by BSU and has had reverberating effects on campus.

But the advancements set in motion by these students’ actions were far greater than they could have imagined at the time. 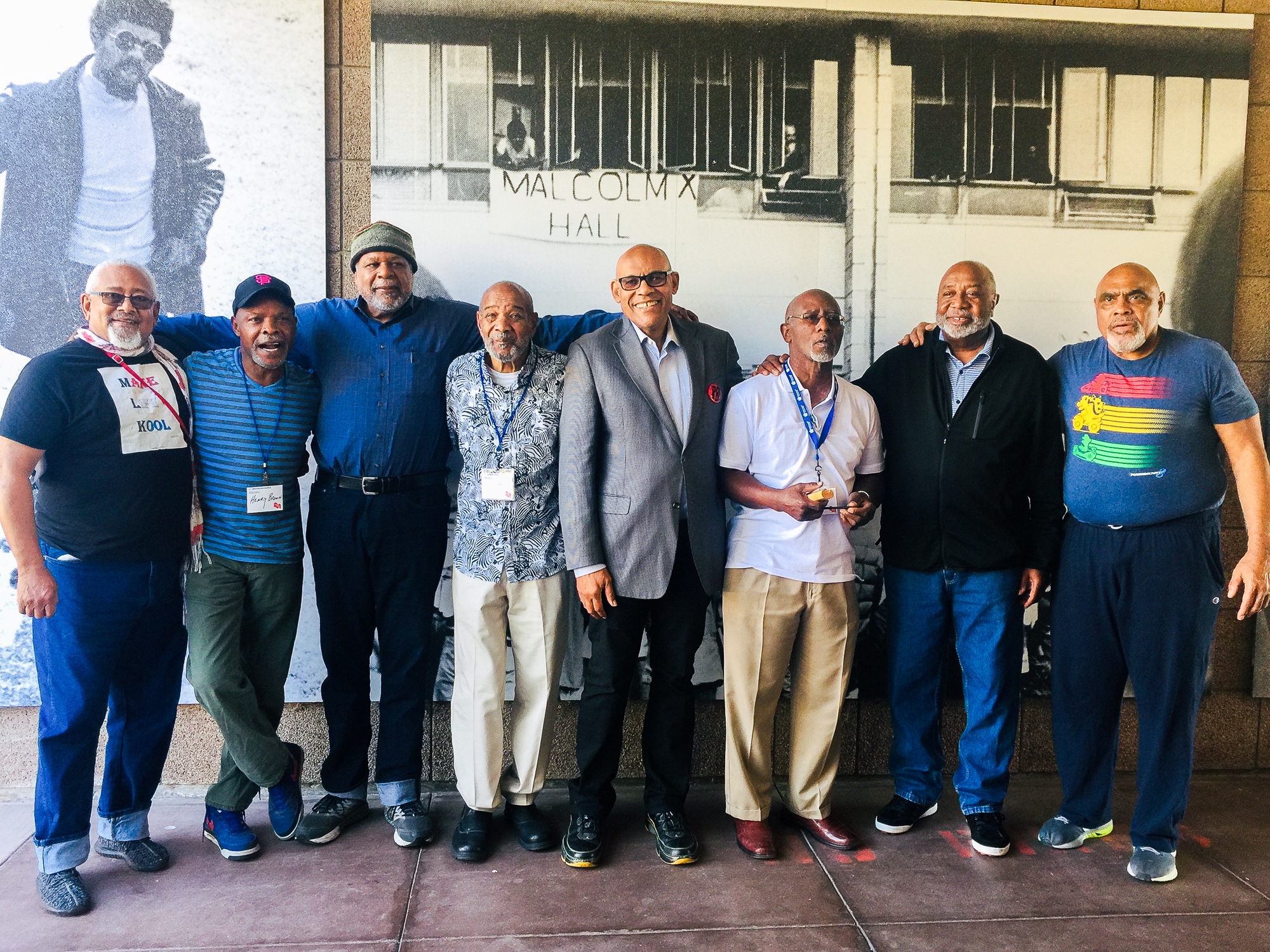 Several of the 12 protestors gathered at UCSB to celebrate the Takeover’s 50th anniversary. Courtesy of Professor Jeffrey Stewart

“What’s really amazing to me is to look at all the pictures and see yourself in these pictures at 18, 19 years old not realizing that you’re contributing to history at the time but that you have made history,” Davis said.

“You feel very proud that you happen to be in the right place at the right time to make such a positive contribution.”

Many of the participants cite the Takeover as a significant moment in their lives, both shaping their time at UCSB as well as the future they would go on to have.

“[My involvement] shows and is an indication to my children and my grandchildren as to sacrifices that sometimes have to made in order for progress to be attained,” Rahman said.

Rahman now works as a supervising case manager for a community organization in Los Angeles working toward gang prevention.

Davis also attributes her time in BSU as “stirr[ing] up in me the importance to learn more about my heritage, to be proud of who I was and to be in a position to fight for basic civil rights.”

She currently works as an assistant professor at Charles R. Drew University of Medicine and Science, a minority-serving institution in L.A. County.

Nezey, who has since gone on to work in education for the last 50 years, believes that working with the youth is the best way to “change the culture of society.”

He places the burden of effecting change on today’s generation of students.

this shouldn’t be encouraged

A few years later, I was at an A.S. meeting and the Black student group blocked the doors and wouldn’t let anyone out until their group got funding.

Beautiful work. Thank you for your time, love and support alumni!

👍👍 to the protesters. They did a right thing.

I wonder what idiot posted “Inspiring”?