The Daily Nexus
Student Gov
Terms in Review: IVPs Tianna White and Catherine Flaherty
May 10, 2021 at 9:00 am by Atmika Iyer

The Nexus has compiled profiles of our current Associated Students elected officials to reflect on their past year in office. As they look back on their campaign platforms, we asked our elected officials to tell us about their successes and shortfalls throughout their terms in office. The term in reviews for the other executives — President, EVPLA, EVPSA and S.A.G. —  can be viewed at dailynexus.com.

During the 2020-21 school year, the position of the Internal Vice President was subject to many changes and challenges during what can only be described as a historic series of events brought on by the COVID-19 pandemic. 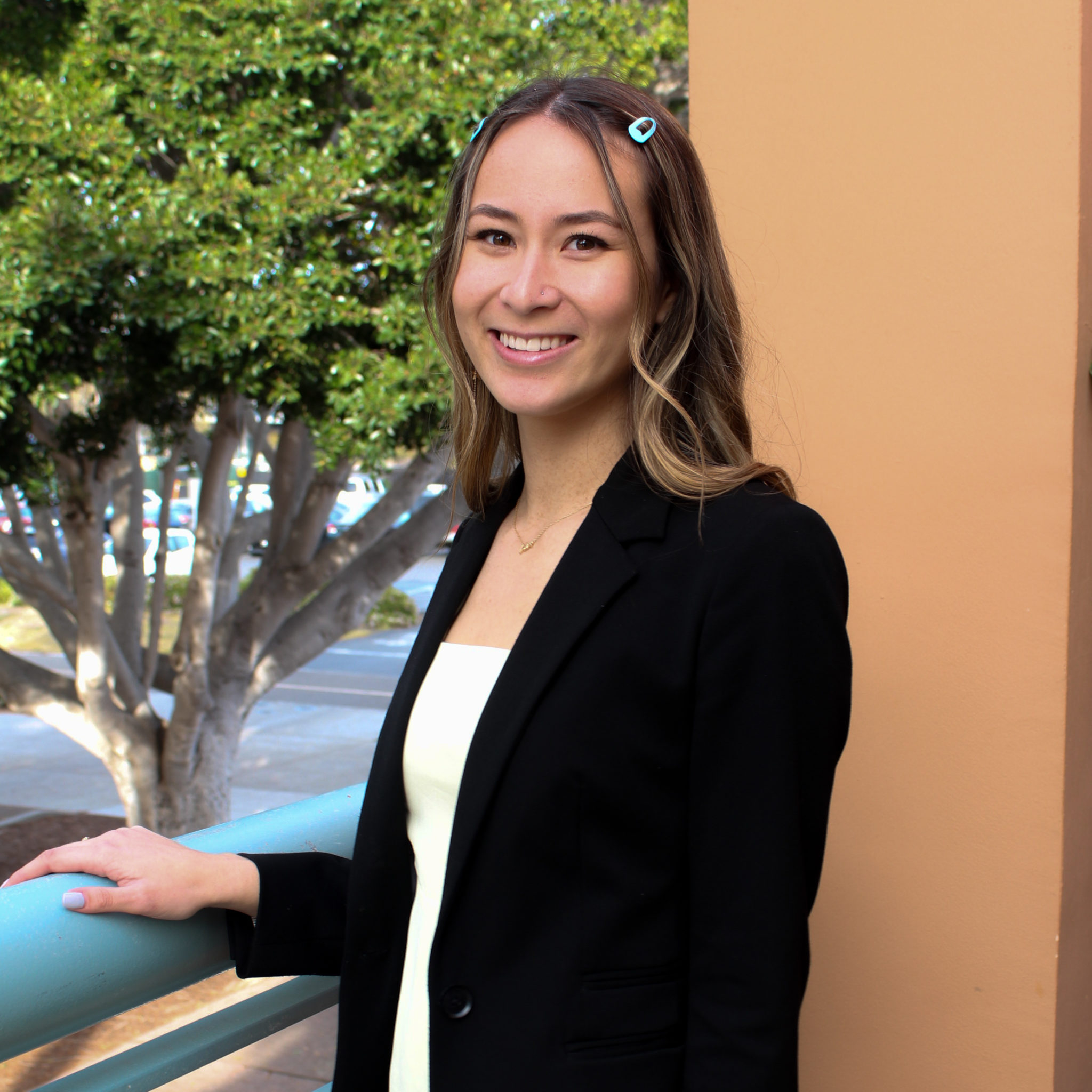 In addition to presiding over the Senate during the recall effort early in her term, White also greatly expanded trainings for Senate members. Courtesy of Tianna White

Aside from the obstacles present during a year of remote operations, fourth-year political science major and elected Internal Vice President (IVP) Tianna White had to temporarily assume the position of president following the resignation of former President and fourth-year sociology major Daevionne Beasley after sexual assault allegations were raised against him.

Third-year history of public policy and political science double major Catherine Flaherty — who was first pro tempore at the time — took over the responsibilities of IVP while White occupied the position of president, as they both waited for the presidential special election that would return them to their former positions.

White was IVP from late May 2020 to late October 2020 and resumed the position again following the Jan. 14 special election of fourth-year political science and environmental studies double major Lea Toubian as president. When White resumed the position of IVP, Flaherty stepped down and once again took over the role of first pro tempore.

Prior to being sworn in as IVP, White rewrote parts of Associated Students (A.S.) Legal Code as a senator to expand her future position. The rewritten code added positions and processes to the office that ultimately increased transparency, with an alternative format for senators to report their Boards, Commissions and Units (BCU) updates.

“Chairing the Senate is probably the biggest job [of IVP]. And oftentimes, a lot of IVPs … overlook the role of their office. So one of my biggest things that I really, really strove to change was the role of the Internal Vice President office in relation to the entire association,” White said.

“During my last week as a senator, I rewrote the legal code for the office. I implemented internal affairs coordinators and PR and marketing coordinators. And then … we started to streamline the communication between senator BCU updates.”

The BCU updates are now reported on Google forms instead of at every Senate meeting, and the information is collected and published on the IVP Instagram page.

White said there were challenges right at the start of her term as IVP, including Zoom bombings at her first two meetings. After swiftly switching to a webinar format, White quickly resolved the first issue of her tenure.

Soon after, the Senate grappled with a recall campaign calling for Beasley’s removal. Students and Senate members initiated a recall effort against the then-president, and White presided over the meetings in which the recall was discussed.

“I had to find a very, very fine line of what is deliberately not recognizing people’s voices or people’s opinions, and what is facilitating effective discussion. And to be honest, there were definitely some meetings where I also got very emotional. And it was hard,” White said.

Looking back on her tenure, White said there were moments when she could have more carefully navigated the conversation surrounding Beasley and the recall effort. She added, however, that it was also important to give people the time to voice their concerns and opinions considering the subject matter.

“I definitely think there were times where I could have controlled the Senate meeting a little more carefully, but overall, I think, given the circumstances, given the discussions surrounding the topics, I think that it was very important for people to be able to speak what they wanted to say,” White continued.

In addition to presiding over the Senate during the recall effort early in her term, White also greatly expanded trainings for Senate members, following through on one of the platform points she ran on.

“So typically, and I know that this was a big critique of last year with [former IVP] Alli [Adam’s] term as well, was that training sessions for senators oftentimes fell through,” White said.

“The deadline was by week two of fall quarter, and people just weren’t able to make it. And it was just kind of a mess. So this year … I not only had training sessions for senators, but I also expanded it to the entire association, which I was really proud of, and I think that will set a precedent for it for the next coming IVPs.”

Because of the remote nature of the 72nd senate and absence of early bonding events, White said there were clear party divisions amongst senators early on in the year — a challenge for her as IVP when presiding over meetings.

“In the beginning of the year, [the Senate] definitely was very divided. And it was really, really difficult to tackle that divide. I think there was just a lot of miscommunication,” White said. “Just with time, and I think following the recall, that is when you really started to see the Senate overcome that obstacle and start to unify.”

By late October, White had become interim president and Flaherty took over as IVP. Flaherty said her primary goal was to provide stability to the 72nd Senate by trying to successfully continue White’s projects, with one such example being the Google form version of the BCU updates.

Flaherty said the transition from first pro tempore to IVP was quite natural and credited White for working with her closely, allowing her to instinctively carry out the responsibilities of the office. The caveat to that instinct, according to Flaherty, was Robert’s Rules of Order — the format and rules by which Senate meetings operate.

“The minute I knew that I was going to be IVP, I sat down and I studied [A.S.] Legal Code and Robert’s Rules of Order more than I ever have before, took a million notes. I would plan out the different motions that could happen before each meeting just so that I could be fully prepared,” Flaherty said.

During Flaherty’s tenure, the annual Senate bonding retreat was continually delayed, which Flaherty attributed to difficulties in finding a day that worked for all Senate members. The retreat is generally a venue for senators to get to know one another so that on the Senate floor, they have a good working relationship. This activity only happened late in the year, almost, according to White, as a reflective experience.

Despite being elected to and becoming the vice president of the Isla Vista Community Services District board of directors during this time, Flaherty said she was able to carefully carry out the responsibilities of both positions with discipline and organization.

White took over as IVP again in late January after Toubian was sworn in as president.

As Zoom Senate meetings continued, White implemented a new rule preventing senators from signing their name up for public forum once it had begun.

Although White handled greater challenges in her role as IVP, there were some aspects of the job that weren’t given attention. For example, there were no group projects initiated by the IVP. Group projects are a way for the Senate to collaborate and work toward larger initiatives.

“It would be naive to say that I didn’t have any weaknesses, or I wish I didn’t do things differently. I think looking back, besides big things, I definitely wish there was more time to do typical things like Senate group projects,” White said. “I definitely wish that looking back, I had carved out more time to do those things. But at the same time, I think I also recognize the situations that have just periodically happened.”

Though these projects did not see the light of day, given the unique challenges that White faced as IVP, she played the role with an adaptable nature that was necessary for a virtual school year, one in which she jumped from IVP to president and back.

“What I’ve definitely learned from this term was being able to adapt to different circumstances. You try to plan as much as you can before Senate. You try to have all these proactive plannings, and then you’ll get to the Senate floor and something unexpected will happen,” White said. “So, you just got to change the plan, sometimes. And you got to make sure that all the processes stay solid, [that] what happens in Senate stays legitimate.”