The Daily Nexus
News
Increased policing and street cameras during Halloween in Isla Vista prompt A.S. to host town hall
October 13, 2022 at 11:12 am by Nisha Malley

Isla Vista Foot Patrol, a branch of the Santa Barbara County Sheriff’s Office, plans to increase its police presence and install street cameras throughout Isla Vista during Halloween weekend, a decision that has been met with opposition and concern from campus and the surrounding community. 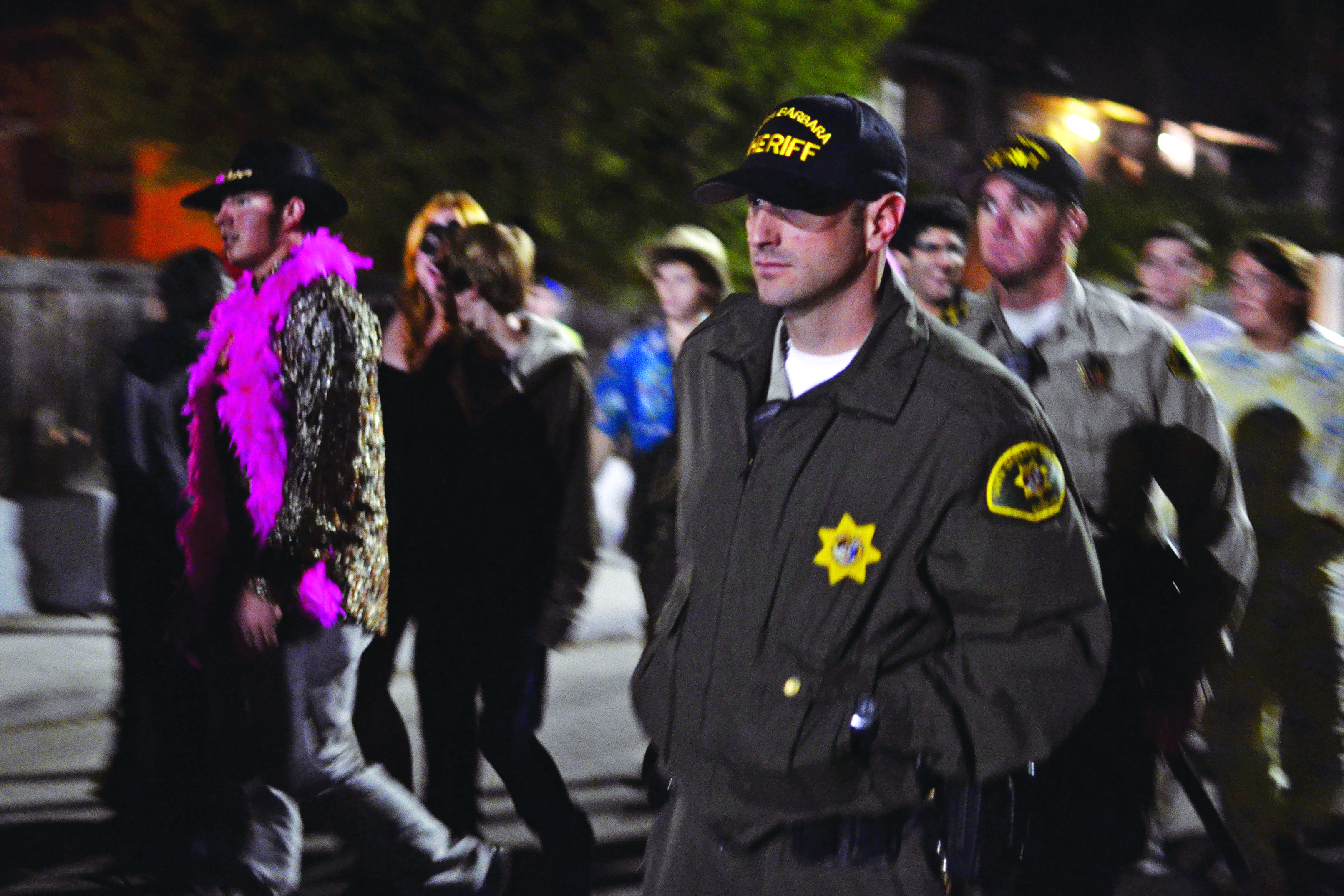 Deputies patrolled Del Playa Drive during Halloween weekend in 2013, one of the last years to draw major crowds to I.V. for the now-quieted holiday. Daily Nexus File Photo

For the past nine years, local police agencies have increased their patrolling of I.V. and enforced regulations and road closure for Halloween weekend. This decision followed 2013’s celebration of the holiday, which drew crowds of over 12,000 and saw 225 arrests, 249 citations and 51 medical transports, according to Santa Barbara County Sheriff’s Office statistics.

Since then, increased policing and strong messages to “Keep it Local” — promoted by UC Santa Barbara and local government through safe, alternative events — have driven down Halloween partying to render it a “no crowd” event. Recently, community members have been pushing back on the heavy policing that accompanies I.V.’s Halloween weekend.

In addition, I.V. Community Services District (IVCSD) discussed the prospect of video surveillance at its Oct. 11 board meeting and heard from IVFP Lieutenant Garrett TeSlaa, who overtook Lieutenant Jarrett Morris’ role overseeing the station this month.

EVPLA Hailey Stankiewicz is spearheading the virtual town hall, to be held on Zoom at 11 a.m. Panelists include representatives from A.S., UCSB Office of Student Life, IVFP and IVCSD.

“There is a critical need to create spaces in which the community can educate each other about the possible repercussions of increased video surveillance and police presence,” Stankiewicz said in a press release. “Recognizing this, the EVPLA Office of ASUCSB is sponsoring this Town Hall to provide UCSB students with a platform to raise their concerns and ask questions to stakeholders within the community.”

Last year, IVFP handed out 17 citations and made zero arrests related to Halloween activities. That same weekend, community members attended a #FreeIV festival in protest of the increased police presence.

This year, IVFP is enhancing its staff to about 35 deputies on patrol for Halloween, compared to its typical eight to 14 deputies for a regular weekend, according to TeSlaa. IVFP is also coordinating with Santa Barbara County Fire Department and Emergency Medical Services to deploy resources outside of I.V. in case of a major event or incident. UCPD will also have additional staff, augmented by bringing in police officers from other UC campuses.

“It’s always a balance between having enough deputies on duty to handle any sort of major incident or major event without becoming oppressive or becoming omnipresent,” TeSlaa said in the IVCSD meeting.

IVFP plans to install between two and four temporary cameras along Del Playa Drive, which will strictly record video from sundown and until crowds dissipate on the Friday and Saturday nights of Halloween weekend, according to TeSlaa. No audio will be recorded by the surveillance cameras, and the cameras will not record activity on private residences.

“That is currently our plan, but we are listening to some of the concerns from the public and will evaluate it again after the town hall meeting,” TeSlaa said in a statement to the Nexus.

At the IVCSD meeting, TeSlaa said that IVFP has relied on temporary cameras for the past twenty years to assist with the management of Halloween weekend. IVCSD Directors Jay Freeman and Spencer Brandt both said this information was news to them, who were fully unaware of the regular use of street cameras in I.V.

“For over twenty years, we’ve used temporary cameras to assist us with management of the Halloween weekend,” TeSlaa said in a statement to the Nexus. “Cameras are used to assist with the apprehension of serious offenders, gauge crowd size and dynamics, and assist with response to medical emergencies.”

Freeman expressed his disapproval of the “secretive” installation of cameras without public notice.

“I’m believing that you had the cameras out there, I’m just unhappy about it,” Freeman said in response.

The cameras — loaned to IVFP at no cost by an unknown allied agency — will be used to monitor for violent crime and aid search and rescue personnel, not to aid in the prosecution of minor crimes, such as open container violations or possession, according to TeSlaa.

“My goal is to answer any questions the public has and reassure them that if we deploy the cameras, they are an asset that helps us catch serious criminals and that we’re not using them to target minor crimes or target individuals,” TeSlaa said in the statement.

TeSlaa emphasized that the cameras will seek to target the activity of outside visitors, and said that IVFP looks to respond to minor offenses through education and diversion strategies with a restorative justice approach.

“I want the cameras to be looked at holistically with how we approach local citizens and their desire for a safe community and a trusting police force, versus outside actors who are looking to do nothing but harm the community,” he said.

Stankiewicz said she aims to convince law enforcement to reverse its decision by demonstrating the community’s disapproval at the town hall.

“The goal of the town hall is to completely drop the idea of implementing surveillance cameras on DP,” Stankiewicz said. “I think that it puts a lot of students in a very scary situation, and so I hope that the town hall echoes that sentiment and makes law enforcement agencies realize that they shouldn’t be putting this up.”

She advocated against the installation of cameras in early conversations with IVFP, arguing that the move would harm law enforcement’s relationship with students and create a feeling of “no mutual respect.”

“From all the students that I’ve talked to, they felt very concerned about it and had a lot of reservations about the possible implementation of the surveillance cameras on Halloween weekend,” she said. “I also think that it could create a lot of public outcry and jeopardize the relationship I.V. Foot Patrol wants to have with students.”

Stankiewicz highlighted student concerns regarding their right to privacy and the potential for implicit bias and racial profiling in the use of video surveillance.

“Surveillance cameras can lend to implicit bias instances and racial profiling because students of color are statistically so much more likely to get racially profiled off of surveillance cameras than white students are, and that’s a really big concern that I brought up to law enforcement,” Stankiewicz said. “I also brought up the fact that a lot of students are concerned that it would impede their Fourth Amendment rights and issues of privacy.”

“I don’t think there’s a need for increased police presence at any point because I think there are better options to keeping the community safe by responding to students without punitive measures or measures that make students feel criminalized, putting their mental health first,” she said.

TeSlaa said that the ability to remotely monitor streets through video surveillance will allow IVFP to deploy fewer uniformed deputies throughout I.V.

Regardless, Brandt raised the concern that the community may view the use of cameras as an unwanted overreach of police power.

“Many people view the existence of the cameras as a bit of escalation of enforcement presence,” Brandt said.

In his presentation to the board, TeSlaa recounted stories of three separate incidents in which the use of cameras in I.V. helped prevent or interrupt serious crimes — an attempted sexual assault, a suspicious stalking of an intoxicated woman and an instance of a person breaking into people’s cars.

“They are things that we’ve historically used to great success in suppressing or preventing some pretty violent and some pretty horrific crimes,” TeSlaa said.

Freeman called for a modification to IVFP’s planned use of cameras, expressing that community members have an “expectation of privacy” that should be preserved.

Use of cameras in law enforcement is ubiquitous. Cameras are everywhere–including on everyone’s telephone. Any law enforcement agency that “turns off their camera” does so at considerable risk. My neighbor’s camera footage was used to help arrest the individual attempting to kidnap and molest residents of Isla Vista in February. He is now in jail. Perhaps Ms.Stankiewicz chould review that incident and appreciate how useful cameras can be in preventing serious injury–particularly when masses of out of town party goers descent on IV and rip it to pieces. Assuming someone is severely injured on Halloween; their parent/attorney will likely want… Read more »