During Halloween weekend, between Oct. 29 and Oct. 31, the Isla Vista Foot Patrol handed out 17 citations — 13 of which were traffic related and four of which were alcohol related, according to a press release from the Santa Barbara Sheriff’s Office. Though two people were arrested during the span of those three days, both arrests were for outstanding warrants and were not related to Halloween partying. 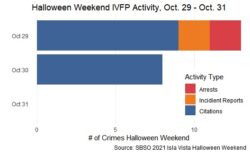 Over the course of Halloween weekend, the UCSB and I.V. communities see an increase in policing and regulation as a result of previous Halloween weekends, which drew crowds greater than 10,000. Crime statistics and attendance numbers for the annual weekend have declined drastically since 2013, which saw over 200 arrests and nearly 250 citations.

In a statement to the Nexus, Isla Vista Foot Patrol’s (IVFP) Community Resource Deputy Justin Schroeder said that none of the citations from Friday to Sunday were related to violations of the festival ordinance — an ordinance issued every Halloween prohibiting loud music being played at residences from 6 p.m. to 7 a.m.

Schroeder added that IVFP did not shut down any parties during the weekend, but it did educate some residents who were unaware of the festival ordinance and playing loud music.

“This year was almost exactly the same as last year. From talking to people over the past few weeks, it sounds like almost everyone in I.V. does their Halloween parties the weekend before and then goes back home or heads downtown for the actual Halloween weekend,” Schroeder said in a statement to the Nexus. “The haunted house that I.V. parks did was very well attended and I think the UCSB concert had 2,800 people, so residents were definitely taking advantage of the provided activities.”

On Saturday, many student organizations gathered near Sea Look Out Park to gather in a festival style andto protest against the heavy law enforcement presence — which includes IVFP, UC Santa Barbara Police Department and other UC campus officers. The event featured several campus organizations, people selling earrings, stickers and clothes and some speakers as well.

“Really our only comment would be to thank everyone for keeping Halloween a local and safe event. There were a number of small house gatherings that looked fun, but no large out of control parties so that was great,” Schroeder said. “I was also excited to see so many people at the sanctioned events instead of the mega parties like in years past. We were able to drastically reduce our staffing levels from previous years also so that was great.”