A coalition of UC Santa Barbara and Isla Vista student groups and community organizations are hosting an Oct. 30 festival — which will include food, music and tabling — to protest the increased police presence in I.V. during Halloween weekend. 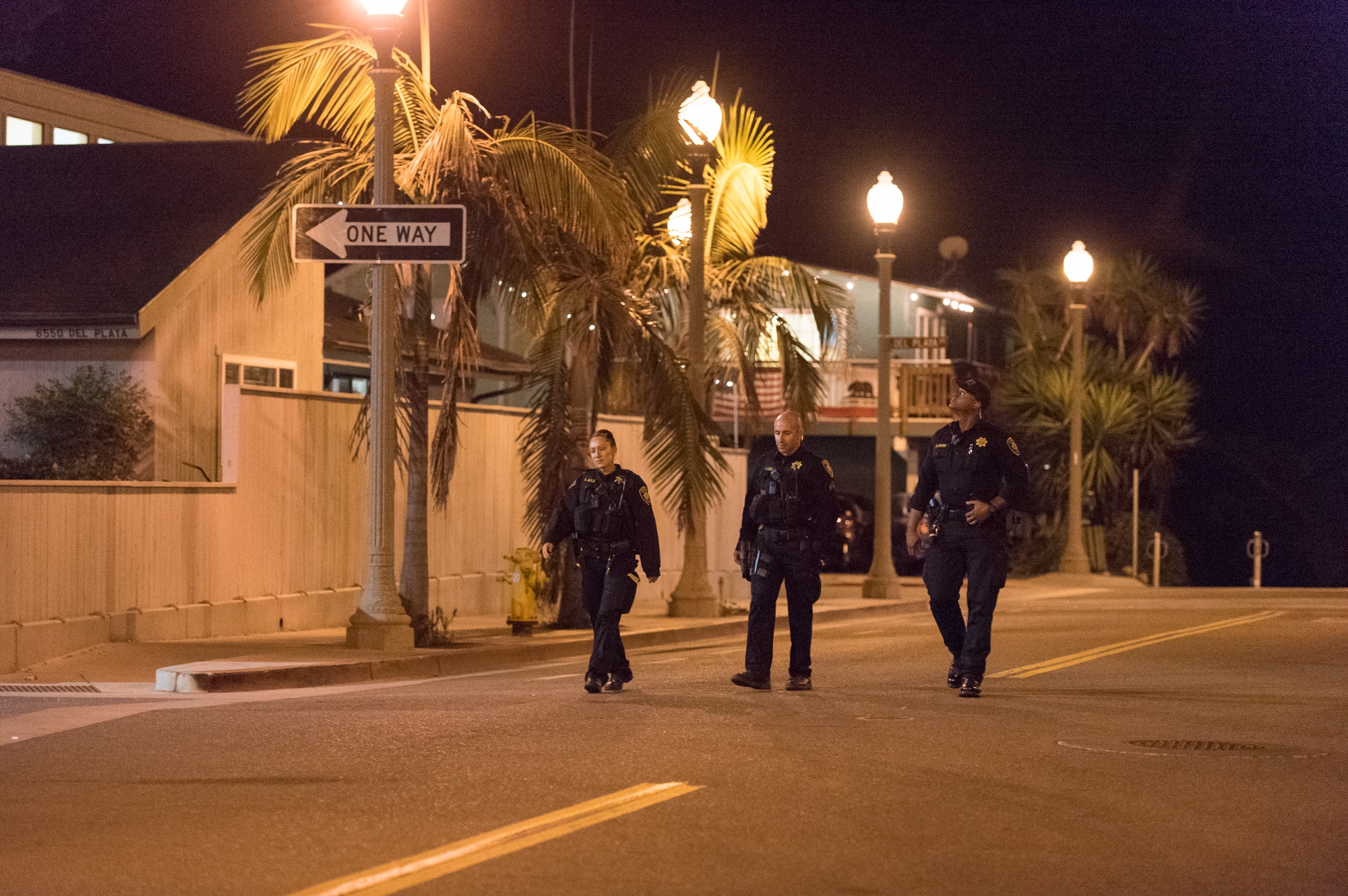 The #FreeIV festival will protest the increase in policing and regulation I.V. sees on Halloween weekend. Here, a trio of UCPD officers patrol the streets of I.V. during Halloween weekend in 2016. Daily Nexus File Photo

Over the course of Halloween weekend, the UCSB and I.V. communities see an increase in policing and regulation as a result of previous Halloween weekends, which drew crowds greater than 10 thousand. Crime statistics and attendance numbers for the annual weekend have declined drastically since 2013, which saw over 200 arrests and nearly 250 citations.

This year, Isla Vista Foot Patrol (IVFP) Lieutenant John Maxwell said that the IVFP decided to increase staffing for Halloween weekend but not on the scale of previous years. The UCSB UC Police Department (UCPD) will be upstaffing with police from non-UCSB UCPD officers coming for Halloween weekend, UCSB residential halls and apartments will have fencing and the Santa Ynez and Sierra Madre campus apartments will have vehicle checkpoints.

In addition, the Santa Barbara County Festival Noise Ordinance, which prohibits any outdoor event with loud music where people are invited free of charge, will be in effect Oct. 26 to Nov. 4 from 6 p.m. to 7 a.m. the following morning.

The event protesting these police and regulation increases — named #FreeIV — will be held at Sea Lookout Park beginning at 11 a.m. and will give students and community members the opportunity to enjoy live music and food as well as learn about progressive community organizations.

“Essentially, the idea is to give a safe place to celebrate [Halloween] in Isla Visa during that weekend,” said Taylor Clark, co-chair of UCSB’s Young Democratic Socialists of America (YDSA).

“Although there are some events on campus … what we thought was missing was really a student-organized option for people to enjoy the holiday weekend,” he continued. “We want to give them a safe place to celebrate the holiday, essentially outside of the purview of the university.”

According to Gina, a Food Not Bombs organizer who declined to state her full name for privacy concerns, the participating groups have a wide variety of criticisms about increased policing and the festival ordinance.

“Instead of having events that are safe, people end up going to private house parties [and] getting really drunk or not doing anything at all, which doesn’t allow us the opportunity to build community,” she said of the effect of the 6 p.m. festival ordinance.

“What we want is events that are safe for the community and we want the money that’s used on policing to be used instead on those events,” she continued.

In addition, Gina said that the added cost of extra policing could be better spent serving students’ basic needs.

“Obviously I.V. has a basic needs shortage. We are in a food desert, there is not enough housing for the students or for the people that live here,” she said. “And we think that the resources that are spent on policing should be used for those things instead.”

Groups attending the event, which was organized by YDSA and Food Not Bombs, include the Bonfire Collective, Students Against Sexual Assault, El Congreso, Students for Justice in Palestine, Eco Vista, Campus Democrats, Underground Scholars and Cops Off Campus, according to Gina.

The organizations have been meeting for approximately a month prior to plan the event, she said, and are hoping to create solidarity with one another’s movements.

“[This is] the first time in a long time that so many groups have come together under one cause, which is anti-policing,” Gina said.

“This is just the starting point … we want this to be the launchpad for our organizations working more closely together in the future. We want there to be more solidarity and collaboration between our groups, so that we can actually change Isla Vista for the better long term,” she continued.

Clark, who played a large role in organizing the upcoming event, reiterated that the coalition of participating groups was based on community-building.

“I’m optimistic that we’ll be able to work out some shared priorities after the following campaign and continue to organize around other issues that are infinitely important to the community in the future,” he said.

Both Gina and Clark emphasized that excessive policing in I.V. during Halloween weekend was more detrimental to the community than funding and promoting grassroots, community-organized and -oriented events like #FreeIV.

“A 2019 study done by the [Isla Vista] Community Services District shows that the vast majority of arrests and citations in Isla Vista are done for nonviolent offenses. We’re talking about drinking in public, public intoxication, underage drinking, things that we can solve internally without violent police forces, putting people in jail overnight or putting people in the drunk tanks,” Gina said.

“If instead, I wanted to have events that could actually build community and not just be about drinking and blacking out, having a deeper community — we can do that from the ground up. We don’t need the government or the county or the police department to come in and enforce these perfectly overprotective rules,” she continued.

Clark noted that while the groups understood the necessity of checkpoints outside of I.V. to prohibit out-of-town visitors during Halloween weekend, the community of I.V. does not benefit from continual heavy police presence.

“The focus of the campaign is showing that people now have rights to self-determination,” Clark said. “We never ask the cops to be here, and we don’t really feel safe with them here, and they aren’t really solving what the problem [was] anyway.”

Love this event! We waste millions of dollars on over policing that does nothing. How much money has been wasted every year that could have been used to build more housing and provide more resources to students. Students are already unsafe when they don’t have houses. They’re already unsafe with all the sexual assault in IV. Putting up fences and bringing in armored personal vehicles to occupy the streets does nothing to help that all it does is make students feel like prisoners in their own college. Munger Hall makes more and more sense when the UC treats us like… Read more »

So students are unsafe because of sexual assault and your recommendation is to kick out law enforcement. Who’ll be catching these rapists – you? Are you proposing vigilante street justice?

You do realize that 30% of police are absuers so do you really think that theyre really going to do jack shit about sexual assualt? Not to mention that most rape cases go unsolved by police. Oh no we’re kicking out the people that already do nothing what ever will we do!!!!

You are probably armed to the teeth to make such ridiculous suggestions. If you get your way and police leaves town, and everyone knows about it, who’ll stop criminals from coming into your place and putting a gun to your face? And did you know that when certain emergency scenes happen, your police friends are the ones who give firefighters the all-clear otherwise they will not go in. But your overprotected spoiled first world problematic self thinks you can talk your way out of everything. Get rid of the police, and get ready for open carry. Good luck.

Matt G, you’re trying to talk sense to the senseless. Better watch out before you get accused of complaining for actually stating the facts. These buffoons in these supposed anarchist cults, biggest hypocrites on the planet. They bitch and whine about the cops, wear their cute little “acab” and “ftp” attire, talk tough, but when confronted by a voice of opposition like they did during their joke of a protest march this past May, what is the first thing they do? They wanted law enforcement to step in and put a stop to the person opposing their warped little view.… Read more »

Mucho texto The demand is very simple we dont want zealous iditos with too much funding for military grade weapons coming in here every god dam year making us feel like prisoners at are own school? I can cite you stats on how over policing does jack shit, how broken windows policy does nothing. I can cite you the history of UCPD regularly brutailizng and killing students not just at this campus but across the UC but it would be lost on you. Its lost on you cause you do not fundamentally care about people. Youre probably some bougie fuck… Read more »

Wow, Anon3, what a clever response! Actually, not really and it is indicative of the mindset of the cults you support as well as the lack of knowledge you posses on matters of policing, weapons and statistics. Military grade weapons, yes sure they are. The AR-15 rifles that law enforcement carries is also available to the average person as long as they provide legal documentation and are not a convicted felon. Same goes for the Kevlar vests worn by law enforcement, you can get those on Amazon. Stats you say? Sure, the same stats fabricated by ivory tower academia in… Read more »

The list of Halloween events on and off campus is a mile long. This is the one weekend when additional law enforcement can save lives. These are the same outfits that turned our parks into drug villages. Great job solving that problem “internally.” Who is supposed to address “all the sexual assault in IV”? “Gina”? Sexual assault is a crime and perpetrators need to be arrested and charged–by law enforcement.

Anonymous, you have to look deeper into the purpose of this “freeIV” event and the basis behind the organizations involved. All extremist anti-homeowner, anti-business (including small business), anti-cop, basically the furthest extreme left to where they’re one and the same as extreme right Trumpies. No better, no worse, just the same. So why this event on this weekend? It is very simple. They want to create the possibility to incite the cops to respond in some form or another so they can cry “police brutality” and “police state” in a failed effort to promote their extremist agenda. The funny thing… Read more »

Look old man your old fucked up ways are dying. Come here to complain all you want, the future is just going to run you in the dust

Wishful thinking little man. Like I said above, they got their asses handed to them politically and legally, they stick to their funny little catchphrases and that is all they have. meaningless, unimportant, irrelevant, just like Trump supporters.

You write like a Neanderthal. You ain’t got no future either, bruh.

So much to discuss on these issues & matters, but people are gonna have to learn to sit down & actually discuss. I see a lot of these comments & I gotta ask how did we get here.

Matt G, you’ve insulted the Neanderthals kind sir! They were actually savvy, resourceful and productive. The majority of those movements, with the exception of Students Against Sexual Assault, and those that support them, not so much. The best part about many of those those leading those groups is that they don’t live in Isla Vista, but yet want to meddle in its dynamics. But alas, all their meddling leads to epic failures. Look at the bum encampments in the park and their attempts to interfere on that matter. Their plant on the park board, he was voted down. Their little… Read more »