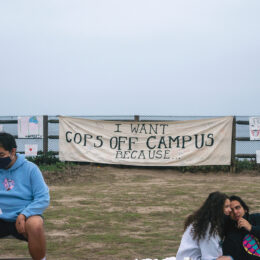 Community members came together to discuss their thoughts and feelings about police involvement at UCSB and in Isla Vista. (Sydney Haupt / Daily Nexus) 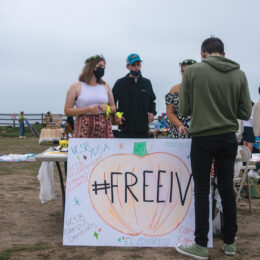 A student checks into the #FreeIV festival. All those in attendance were required to show proof of COVID-19 vaccination or a UCSB green badge. (Sydney Haupt / Daily Nexus) 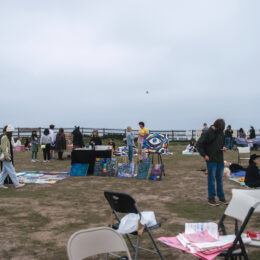 Isla Vista locals sold everything from art to clothes at the #FreeIV event.(Sydney Haupt / Daily Nexus) 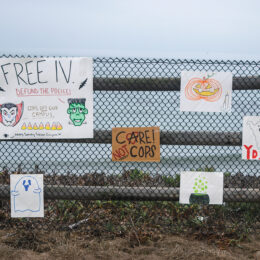 These organizations highlight the necessity of physical and mental health resources, solutions to the housing crisis, and fair treatment to students and professors. (Sydney Haupt / Daily Nexus) 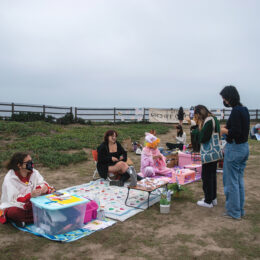 In the spirit of Halloween, many of the attendees and vendors were in costume. (Sydney Haupt / Daily Nexus) 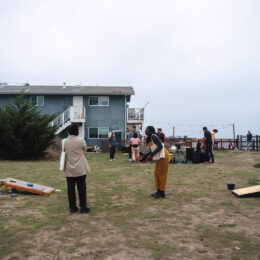 Attendees could be spotted rocking out with the band and playing a variety of games in the park. (Sydney Haupt / Daily Nexus) 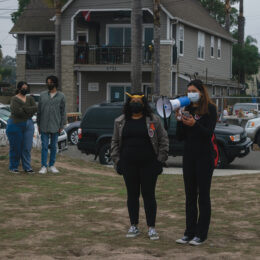 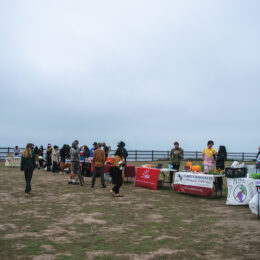 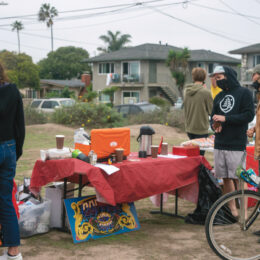 UCSB’s “Cops Off Campus” chapter hosted their recurring “Coffee Not Cops” session, where members give out free coffee and talk to people about police. (Sydney Haupt / Daily Nexus)

The festival, hosted by a coalition of student and local organizations, held live music, speakers and community artists selling local wares. Attendees also had the opportunity to speak with representatives from the progressive organizations of the event.

Originally set to be held at Sea Lookout Park beginning at 11 a.m., the event was relocated to a nearby park on the 67 block of Del Playa drive that same morning. Despite the last-minute switch, the festival still proved successful, according to Taylor Clark, third-year history and sociology major, Young Democratic Socialists of America (YDSA) co-chair and #FreeIV organizer.

“I think it’s a pretty clear demonstration that students have the capacity to run their own community,” Clark said.

“The whole idea is to demonstrate to the county, to the university that students have the capacity to ‘police themselves’ but by police, we really just mean, ‘keep a safe space for people to celebrate the holiday.’”

For the past eight years, I.V. has seen an increase in policing and regulation after Halloween weekend in 2013, which drew crowds of over 10,000 and saw 200 arrests and 250 citations.

This year, Isla Vista Foot Patrol (IVFP) Lieutenant John Maxwell said that the IVFP decided to increase staffing for Halloween weekend but not on the scale of previous years. The UCSB UC Police Department (UCPD) was upstaffed with police from non-UCSB UCPD officers, UCSB residential halls and apartments were fenced in and the Santa Ynez and Sierra Madre Villages campus apartments had vehicle checkpoints.

For Noelle, a sophomore at San Marcos High School and member of the Cops Off Campus SB Youth Coalition who declined to give her last name for privacy reasons, the topic of over-policing is close to home. Noelle, alongside classmates and other advocates, successfully worked to remove the San Marcos School Resource Officer (SRO), an armed police officer responsible for crime prevention at the high school.

After their school board unanimously voted to remove the position from campus, SRO’s are being removed from all three high schools in the district.

“In my position, I want to try to uplift the voices of people who feel like they aren’t in a position where they feel safe enough to speak out [against the SRO]” Noelle said, noting that despite community backlash, the group “isn’t going anywhere.”

“Our next focus is using the money that was previously used for the SRO and putting it toward mental health resources. Solve the root of problems, like, school shootings or drug use or mental health,” she continued. “That’s what we want to try to solve. Because having police on campus does not protect all students.”

The event, which was organized by YDSA and Food Not Bombs, also had a number of other organizations — including Bonfire Collective, Students Against Sexual Assault (SASA), El Congreso, Students for Justice in Palestine, Eco Vista, Campus Democrats, Underground Scholars, The Feminist Collective and Cops Off Campus — table and speak to attendees.

For Manju Cheenath, a fourth-year biology major and co-chair of SASA, the event’s message aligned with her organization’s message.

“SASA has been doing a lot of work with the Clery Act and the timely warnings on campus,” Cheenath said. “A lot of that work involves working with the police and kind of noticing how the police aren’t always working how the students want them to work.”

“The message of this event is so good because we see how it is with police on campus and in I.V., and SASA is working with a similar mission right now.”

Cristina Guerrero, a fourth-year English major and co-chair of The Feminist Collective, said that #FreeIV’s goal of increasing support for removing the police presence in I.V. during Halloweekend aligned with her organization’s values of intersectionality.

“We are anti-capitalist, anti-imperialist. We support abolition on all fronts, that’s the military, the prison industrial complex and the police,” she said. “We are huge advocates for getting cops off of not only campus but out of marginalized communities [and] low income communities because police heavily target those communities.”

Guerrero added that she enjoyed the solidarity she felt between the organizations attending the event.

“We’ve gotten a good amount of people interested in our work. And it’s really nice to see that not only orgs we’re [previously] collaborated with, others as well, kind of come together in support of this,” she said.

For Clark, the event’s success showed that students and community members had the capacity to enjoy Halloween and keep one another safe without excess policing.

“I think we’ve accomplished our goal of showing that it really isn’t necessary to have the hyper-militarized police presence as present in Isla Vista during Halloween,” he said.

“As a community, we have the capacity to put on safe events … All of our resources right now, through tax dollars through tuition, that are being funneled into the cops, really are more of an anathema to the type of safe environment that we’re trying to create.”

The increased police presence in Isla Vista during Halloween is because in years past upwards of 30,000 people attended the “party” and tore our town to pieces with hundreds of arrests and injuries. Halloween cost this community hundreds of thousands of dollars annually. This is well documented in the Nexus. The real news this weekend is that we had another peaceful Halloween. How one can be against sexual assault but at the same time want to get rid of the police is counterintuitive. #FreeIV should add an IQ test to their requirement for admission.

Out of an area of approximately 22,500 people and with 11 organizations present, the most they can draw is maybe 150 people, some of those being the organizers of the event. It kind of tells you something and I think I know what it is, but you be the judge. What a joke. Even funnier is this quote: “We are anti-capitalist, anti-imperialist. We support abolition on all fronts, that’s the military, the prison industrial complex and the police. We are huge advocates for getting cops off of not only campus but out of marginalized communities [and] low income communities because… Read more »

Right you are. This is the naivete that damn near got Trump re-elected and is crippling the democratic party. Run that drivel by a bunch of suburban moms and you’ve got Tuesday night in Virginia.

Anonymous, the anti-capitalist thing falls apart once you use an Apple iPhone or a Samsung or LG Smartphone. Hypocrisy abound. The anti-imperialist thing, such a far-fetched concept. Seriously, imperialism is as dead as dead can be, what exists today is globalization and ironically it is what this ilk favored. Abolition, that says it all. When they say defund the police they actually mean abolish. Good luck with that, it is never going to happen now or ever. Same goes with military and especially in a country where it is a volunteer military, not mandatory like all those social democracies they… Read more »