The Daily Nexus
Sign of the Times
Violence Breeds Violence: How Rhetoric and Coverage Reveal Similarities Between US and Myanmar
March 16, 2021 at 9:00 am by Toni Shindler-Ruberg 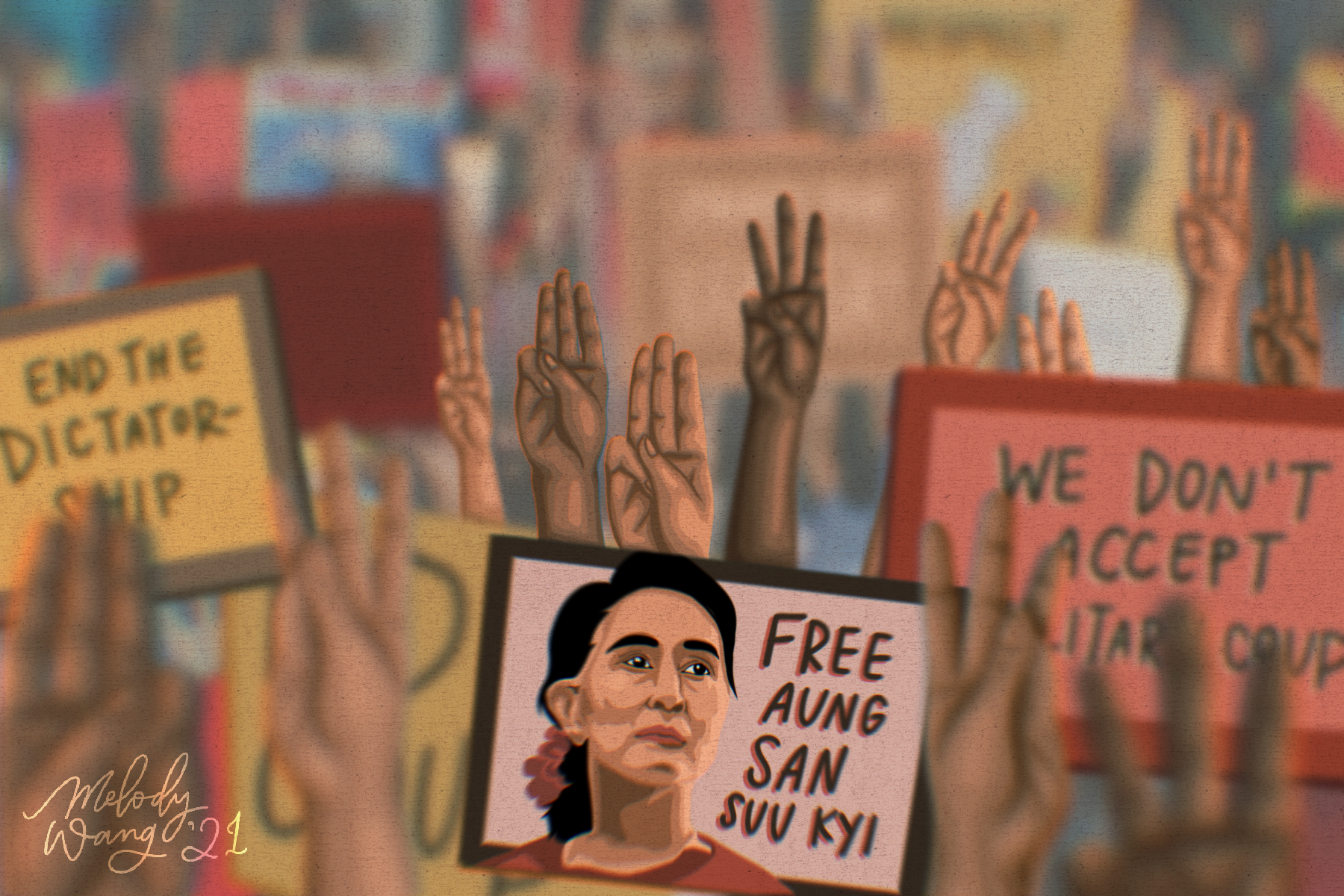 I’m talking about America. And Myanmar. And Iran, Guatemala, Thailand and …

Foreign violence and unrest, especially in less-developed countries, are often ignored and dismissed. Desensitized to shaky footage of clamoring crowds and bloodied bodies, it’s easy to flip or scroll past violence. It’s equally as easy to repost, drop a prayer hand emoji and move on.

Destruction has become entertainment, or worse, an afterthought.

I’ve heard more about the Myanmar coup from Instagram than many traditional news outlets, combined. Processed alongside the lack of coverage about the rise of hate crimes against Asians, I’ve turned a critical lens to the rhetoric and discourse of destabilization, in America and abroad.

The Myanmar National League for Democracy (NLD) won their country’s election on Nov. 8, 2020. On Feb. 1, 2021, the Myanmar military staged a coup, overthrowing the former democratic government, detaining former leaders, cutting off internet access and stopping flights. Since then, security forces have participated in violent clashes with civilian protestors, night raids and alleged continued use of child soldiers. (Please note, the linked sources include descriptions and videos that may be graphic or upsetting for viewers.)

The timeline and rhetoric used around the Myanmar coup are too similar to the recent Capitol attack to be a coincidence.

America is often portrayed as the pinnacle of peace, unity and democracy (please ignore my derisive snort and eye roll). But months (if not years) of false claims about election fraud and inflammatory rhetoric about race and gender brewed the perfect storm. On Jan. 6, 2021, our Capitol was featured in the shaky footage of a destabilized foreign nation on television.

At one point, only a few feet separated a weapons-wielding, anti-government, radical mob from the core of American democracy. With just a few alterations, that day could have easily gone completely differently, resulting in many more deaths and a successful long-term seizure of control.

Sound familiar? It should.

But if it doesn’t, look no farther than here, here or here. The election fraud false narrative deliberately undermines trust in the system, teaches people to believe incorrect claims and enables Republican lawmakers to exploit anxieties to pass new oppressive and restrictive legislation.

I believe we can count on similar rhetoric and excuses cropping up in Myanmar from the junta. Seeing the struggles and attempted seizure of the world’s supposed ‘model democracy’ is bound to inspire extremist views at home and abroad. It’s a twisted form of inspiration alright, but it’s inspiration, nonetheless.

Jan. 6 proved that with a smidge more planning and a dash of weapons, the Capitol — American democracy — can fall.

So it’s untrue to set ourselves so drastically apart and elevate ourselves to a false pedestal of great morality and unity.

Before coming into power in 2016, Suu Kyi was an international icon and Nobel laureate for her resistance to the former military regime. In 2019, Suu Kyi defended Myanmar against charges of genocide. After hearing an extensive list of United Nations-documented atrocities, she conceded “disproportionate force” may have been used.

As Reuters relayed, President Rodrigo Duterte of the Philippines called the violence in Myanmar an “internal matter.” Other neighboring countries, including Cambodia and Thailand, shared similar sentiments. The foreign ministry issued a later statement, expressing their “deep concern,” especially for the safety of Suu Kyi.

Foreign concern for Suu Kyi is not necessarily support for democracy. Neither is it a strong condemnation of the military’s actions. Performative statements and actions are a way of conveniently sidestepping the truth.

American politicians issued similar wordy but insignificant statements in the aftermath of the Capitol riots.

The chosen framing and coverage of political and social events are incredibly powerful tools. Erasure is a statement. So is picking and choosing which parts to speak about to best suit personal needs. Withdrawing from the conversation and selective conversations quietly lead the rest of us into silence as well.

Dismissal or apathy towards political affairs is a privileged stance, intentional or not. Unrest is not spontaneous and the consequences of regime and policy changes affect us all.

It’s convenient and comforting to separate yourself from chaos. Hell, I’d ignore things too, if I could. But we can’t. If it was hard to care about the lives of others through a shining LCD or LED screen, maybe you’ll pay attention when issues begin affecting you directly.

I do not support drastic military action or intervention. We’ve seen where that gets us. More specifically, we’ve seen the lasting consequences and destabilization of American political and military intervention in Cuba, Afghanistan and all over Latin America. It is not our place to insert political figureheads to serve our own purposes. But stronger opposition to the military’s efforts through methods such as the leveraging of trade are imperative.

I do not pretend to know everything about foreign policy or the nuances of negotiating with deadly forces. Rather, I write to point out the dangers of accepting statements, media coverage and politicians at face value, all from the perspective of an average citizen.

Silence and reframing for individual purposes sows misinformation and mistrust. Mistrust is destabilizing and clears the path for fanatics or extremists to carry out their own agendas. Take the future of our country and the international community into your own hands.

Toni Shindler-Ruberg urges you to stay informed about interrelated international issues because we all live on the same chunk of rock. It’s also just, like, common human decency to care about others’ lives.