The Daily Nexus
Sign of the Times
Spinning Shadows: False Historical Narratives and Protest
January 28, 2021 at 9:00 am by Nicholas Liu 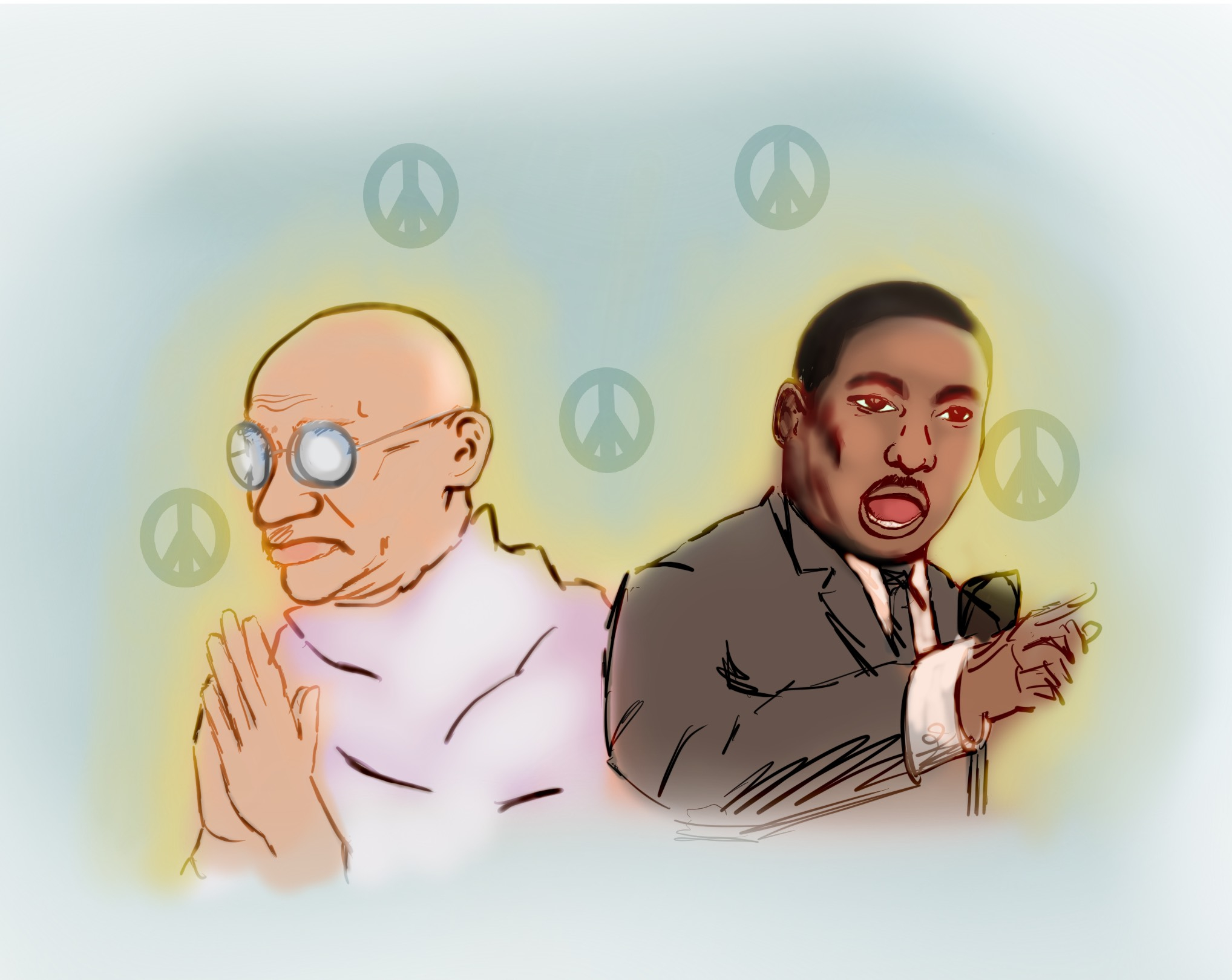 Among the figures of the 20th century, Martin Luther King Jr. and Mahatma Gandhi are both revered in their home countries and acclaimed worldwide as nonviolent revolutionaries par excellence. As issues of racial injustice came to the fore of national discourse throughout the summer and autumn of 2020, it seems that MLK and Gandhi have become especially vogue among a circle of commentators wishing to offer Black Lives Matter protesters their sage and learned advice.

The gist of their argument is this: People like MLK and Gandhi are ideal role models for the Black Lives Matter movement because they advanced political change through nonviolent protest. The main problem with this line of thinking is that it is joined to the hip with prevailing, cult-like narratives that distort the real history.

The first myth is that nonviolent protest in its most stunted interpretation was singlehandedly effective and still can be today; in the dictionary of the Heritage Foundation, this means “refraining from lawlessness,” engaging in “orderly and peaceable assembly,” and “reaching out in the spirit of grace, openness, and understanding.” Now, if only protesters could join arms with their most resolute antagonists and talk out their problems at a national racism conference and a series of televised Great Debates, surely we could come to a compromise regarding the systemic brutalization of Black bodies!

All of this high-minded moralizing ignores the fact that both the Indian independence and civil rights movements used rule-breaking and confrontation to effectively coerce the entrenched classes into ceding political ground. It also neglects to recognize Gandhi’s failings as a revolutionary leader — failings stemming directly from his reluctance to cooperate with more progressive and militant factions when he had the chance.

Conservatives like to portray Martin Luther King Jr. as a sort of fuzzy, pacifist father-like character, but the reality was that he was a consummate agitator with no qualms about flouting unjust laws and escalating disruptive strikes. He sermonized about Christian love and forgiveness but also spoke of Jesus the rabble-rouser as an exemplar of civil defiance. Protests in MLK’s conception did not mean indiscriminate looting and burning, but it did call for the channeling of pent-up rage into a powerful instrument that could compel institutions to reform or pay a price.

In the former British Raj, the oft-celebrated Salt March and other instances of relatively non-aggressive protests now overshadow far more hostile campaigns that paralyzed the economy, caused widespread property damage and had a profound effect on British political calculations. The Quit India Movement of 1942 was eventually suppressed, but the message was clear: India was ungovernable from Whitehall, the cost of maintaining control far too high. It is also telling that one year before the British granted Indian independence in 1947, they had lost their monopoly on military force when a group of Indian naval officers mutinied and sparked a much larger movement that also came to encompass the army and air force.

All of this high-minded moralizing ignores the fact that both the Indian independence and civil rights movements used rule-breaking and confrontation to effectively coerce the entrenched classes into ceding political ground.

The second myth is that Gandhi, MLK and Black Lives Matter have achieved as much social justice reform as they (and the entrenched classes) are given credit for. Even after the passing of the 1964 Civil Rights Act and the 1965 Voting Rights Act, de facto segregation continued in both the north and south; as moderates unfurled their Mission Accomplished banners, MLK collected some crumbs of comfort: “the law cannot make a man love me, but it can restrain him from lynching me.” In 1967 and 1968, MLK planned a national strike to battle racism in the economic sector, but he was assassinated before these ideas could come to fruition.

Gandhi was less amenable to these kinds of economic protest movements. Throughout his leadership of the Indian independence campaign, he regularly sought to hinder the impetus of popular campaigns that pushed for broad changes to enfranchise the working class. Any study of Indian society cannot be separated from a long history of landlord-peasant conflict over taxation and allodial rights and, in this particular divide, Gandhi sided with the landlords.

During the 1928 Bardoli Satyagraha against a new government tax and confiscation scheme, Gandhi dismissed calls for a wider protest against the institution and principle of exploitative land taxation, instead cutting a deal with the government to reduce the rate of the new tax from 22% to 6% while retaining all other levies in their existing form.

Some of Gandhi’s wariness towards popular peasant movements had roots in their methods of protest. Although several instances such as Gandhi’s acceptance (but not leadership) of Quit India indicate that false narratives have dampened his support for more belligerent forms of resistance, he appears to have drawn a line in this case. In 1921, Gandhi insisted that a group of peasants demanding a reduction of exorbitant rents refrain not only from violence but also from abusive language and social boycotting of landlords. Naturally, their protests went absolutely nowhere as the landlords had little incentive to give in.

The point of highlighting Gandhi’s complicated relationship with peasant and worker movements is to suggest that his antipathy towards certain forms of disruptive protest and certain demands for widespread economic change beyond a purely nationalistic framework resulted in the displacement, rather than destruction, of oppressive colonial structures. This is similar to the conundrum that American protesters face today; after a summer and autumn of applying intense pressure on political and social elites, there is some uncertainty over how to proceed.

One commentator suggested that kneeling police officers and public opinion shifts regarding police brutality were tangible outcomes of nonviolent protests by Black Lives Matter. Left unsaid was that people witnessed many of those kneeling officers switching back to riot-control mode when they thought the cameras were off, and that the same Americans who acknowledged Black people suffering at the hands of law enforcement recoiled from electing officials who supported meaningful police reform. These kinds of demonstrative, toothless acts of solidarity and theoretical agreement are not enough, even though most of its practitioners undoubtedly hope it will be considered as such.

Going forward, one thing people must not do is fall into the trap of idealizing the achievements of figures such as MLK and Gandhi. It is easy to view heroes of the past as immaculate beings, to use them in their purified form as physical representations of a righteous cause. But to do so would mean losing a true understanding of the cause’s history. This is precisely what opponents of Black Lives Matter desire, because it defangs the movements that threaten their institutional hegemony.

Portraying a false version of past nonviolent resistance is a way to disarm protesters of their most potent weapons, and attributing greater success than is deserved feeds into the false narrative that present-day oppression isn’t all that bad and isn’t ingrained within our society that reduces the saliency of present-day oppression.