The Daily Nexus
Sign of the Times
This is America: A Brief Spotlight on the Political Theatrics of American Democracy
January 20, 2021 at 10:18 am by Toni Shindler-Ruberg 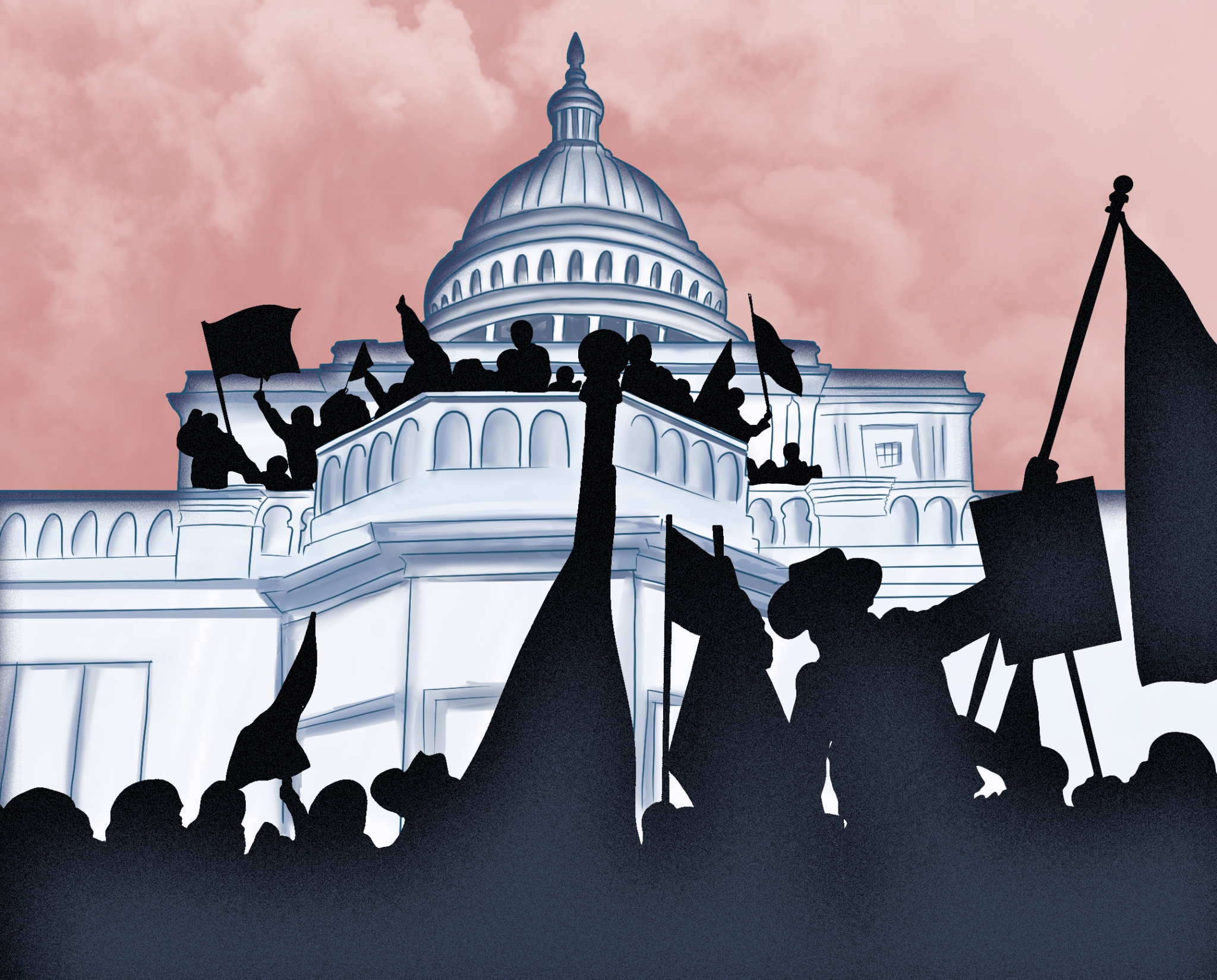 In the aftermath of the violence at the Capitol on Jan. 6, 2021, the actions and statements of both lawmakers and tech companies alike are much too little, 200 years too late.

The Capitol has weathered its fair share of political chaos but never before has it been violently seized by fanatics who were egged on by the President himself. The mob scaled walls, waved Trump and Confederate flags, and vandalized a federal building to stop officials from doing their democratic responsibility of certifying votes. They were not a group of “protesters” nor were their actions protected under the First Amendment. Sent home with Donald Trump’s “love,” these domestic terrorists acted with deliberation and vicious intent compounded by years of passivity and silence.

I’ve noticed three common mistakes in the dialogue about the Capitol attack. Number one: “The attack was a surprise. How could something like this ever happen?” Number two: “This is all just Trump’s fault.” Number three: the continued utterance that “this is not America.” In pursuit of comprehensive understanding and any hope of improvement, we need to reframe our interpretation of the attack as well as its many contributing factors.

Wealthy, white, slave-owning men wove discriminatory legal and social precedence throughout the Constitution. They made themselves the only guaranteed recipients of its outlined rights, provided no initial abolishment of slavery or establishment of universal humanity, and ultimately set up a system that allowed for the purposeful disenfranchisement of minority voters (a practice that continues to this day). Amendments slowly doled out civil rights every so often, but the nation’s economy was built upon the backs of workers of color. Minorities continue to face prejudice, discrimination, violence, and death.

This is America. And that is the truth.

Although Trump’s racist, inflammatory and seditious rhetoric certainly played a role in initiating Wednesday’s attack, it cannot be solely attributed to him. Larger issues like the perpetuation of racial predjudice and discrimination, lies about voter fraud, and political footsie need to be discussed and transformed.

There has been a severe lack of definitive action from either party to address the underlying issues that set the groundwork for the actions carried out on Jan. 6. Wednesday served as a wake-up call for those who have not heard the calls of BIPOC communities throughout the ages.

In reality, we’ve known about the possibility of something like this happening for the entirety of Trump’s term. The division of the country has been apparent for years, if not decades, or even generations. And, in reality, we’ve known about this particular attack for weeks, if not months. Advertised and organized on popular social media sites (as well as fringe ultra-right wing sites such as Gab and Parler), there have been plans circulating for a while. From planning to gather at the Capitol to giving tips on which streets to take in order to avoid police and the best tools for prying open doors, social media was an instrumental part in organizing and inciting the attack.

In the aftermath, social media companies announced permanent or temporary restrictions for Trump and increased patrolling of fake news or hate speech, but the cracks have already formed. Misinformation and hate have already spread and will continue to spread; these latest announcements are trying to repair a sinking ship with a two-inch piece of Scotch tape. Social media algorithms have created pockets of the internet in which the radical right, white supremacists and other hate groups can recruit, directly or indirectly indoctrinate, and radicalize new members.

Members of the mob included individuals linked to the white supremacist group the Proud Boys, QAnon supporters, as well as the 3 Percenters and the Oath Keepers, two of the country’s many armed militant anti-government groups. Neo-Nazi and anti-Semitic symbols popped up against an undulating sea of Trump flags.

In media and popular culture, the minority offender is rapidly and repeatedly criminalized, while white offenders are often given more leeway in representation and labeling. The terms “thug,” “criminal” and “terrorist” are applied liberally when referring to individuals of color and used sparingly, or as a last resort, otherwise.

There is much to be said about the FBI’s joint terrorism task force, but for the sake of keeping this short and sweet, let’s focus specifially on their definition of domestic terrorism.

The FBI defines domestic terrorism as activities “involving acts dangerous to human life that are a violation of the criminal laws of the United States or of any State; appearing [or] intended to: […] influence the policy of government by intimidation or coercian; affect the conduct of a government by mass destruction, assassination or kidnapping.”

Incited by Trump and associated officials, rioters on Wednesday trespassed federal property, intending to “fight like hell” in the effort of stopping the certification of the electoral votes. Their actions directly threatened the lives of law enforcement and lawmakers, with one officer dying from his injuries. Law enforcement found pipe bombs and explosive devices at the Republican and Democratic national committees. I doubt they were planted for decoration.

The event neatly fits the definition of domestic terrorism, and yet, the media and many officials hesitated to designate it as such.

This event is an extention, a display of the white privilege and systemic discrimination upon which this country is built. It’s easy to identify the religious or racial “other” as a threat but it’s hard to look in the face of someone who resembles you and see them as a threat.

The “Blue Lives Matter” slogan that rose from the summer months returned, chanted once again on Capitol Hill as rioters swarmed and beat police officers. The use of the slogan suggests that it was never about protecting law enforcement; it was about diminishing the strength and power of the BIPOC individual, symbolically in favor of the power and domination of white privilege.

Questions and criticism about the law enforcement response — or rather, lack thereof — last Wednesday, compared to the show of force against Black Lives Matter protests and demonstrations, are not advocating for police brutality. Rather, criticism and anger over inconsistencies in treatment and rhetoric are an opportunity to highlight the weaknesses of our response and improvements to be made in the future.

Elected officials are supposed to be the protectors of our democracy. Of the citizens. Of our way of life. How is this possible when leaders represent or subscribe to conspiracy theories, blatant racism and the dangerous lie of believing in only one perspective?

Not all Republicans are Trump supporters, and not all Republicans should be villainized. But with a lying, hate-spewing figurehead leading the party, those within must feel immense pressure to adopt a similar stance to maintain or improve their political power. Soon it becomes part of their identity and their platform. Photographs and videos flaunt elected officials supporting and participating in the mob … are these the people we want in our government?

It’s people like Josh Hawley (R-MO), Ted Cruz (R-TX), and Lauren Boebert (R-CO), who were among the 147 individuals that sustained their rejection of vote certification despite there being no evidence of voter fraud. Even officials like Kelly Loeffler (R-GA), who withdrew her objection, continued the false narrative regarding voter fraud.

Stop undermining the foundation of democracy.

It’s hard to decipher the truth for ourselves — or exist as a cohesive nation, for that matter — when two political groups are so diametrically opposed and prescribe to two radically different versions of reality, neither of which listens to the other side or is truly representative of life in America.

A small wave of government officials (Republican and those associated with the current administration) tendered their resignations, with several more spouting glorious prose about the unacceptable actions of the President. But with just over a week left in their term and records of them kissing the President’s orange ass for the past four years, these resignations and statements are arguably little more than huffy temper tantrums to save face and set foundations for future political aspirations.

Representing the hollow statements of several officials, Paul Rudd as Bobby Newport in “Parks and Recreation” says it best: “I’m against crime, and I’m not afraid to admit it.”

Denouncing violence and Trump’s actions are all well and good, but where was that disapproval four years ago? Only ten Republican members of the House voted for Trump’s second impeachment. Nobody in their sound mind condones violence and destruction, so simply stating that they’re ‘against crime,’ without definitive action to rectify or improve means nothing.

From a Democratic perspective, Trump is an easy target to gang up on to secure a voter base. It’s easy to speak out against his hateful words, but few politicians actually address the systemic issues that enabled his rise to power and balk at passionate, public support of universally beneficial policies that might come across as too radically liberal and unelectable.

While a step in the right direction, Trump’s impeachment and eventual departure from office does not erase generations of discriminatory political practices and rhetoric. The nation will still face discrimination, inactive, shady politicians and the radicalization of politics and fringe groups.

What matters beyond 400-word press statements are politicians’ actions two weeks, two months or two years from now, on both sides of the political aisle.

We must identify and crack down on hate speech, radical and hate symbols, and hate crimes. The radical right, white nationalist and associated extremist conspiracy groups must be understood and treated by all as a genuine threat to our democracy and our nation.

We’ve seen government officials support a president, fellow officials and the administration as a whole through lies and hate-fueled rhetoric for their own political security. And although the Democratic and Republican parties are seeming opposites, they’re both entrenched in and benefit from generations of discrimination and self-service. The hypocrisy of the government and lawmakers cannot be tolerated.

In the face of blatant displays of white privilege, racism and violence, stop saying that we’re better than this, that we need to return to some idealized “before” era. Such an era does not exist but can — potentially — exist in the future.

The theatrics of politics are disheartening and nausea-inducing. Only by directly identifying and addressing issues as well as holding politicians and one another accountable will we ever be able to transform what it means to exist in America.

Toni Shindler-Ruberg hopes that we can cut the shit and that our government can function better than Bobby Newport’s. Please.