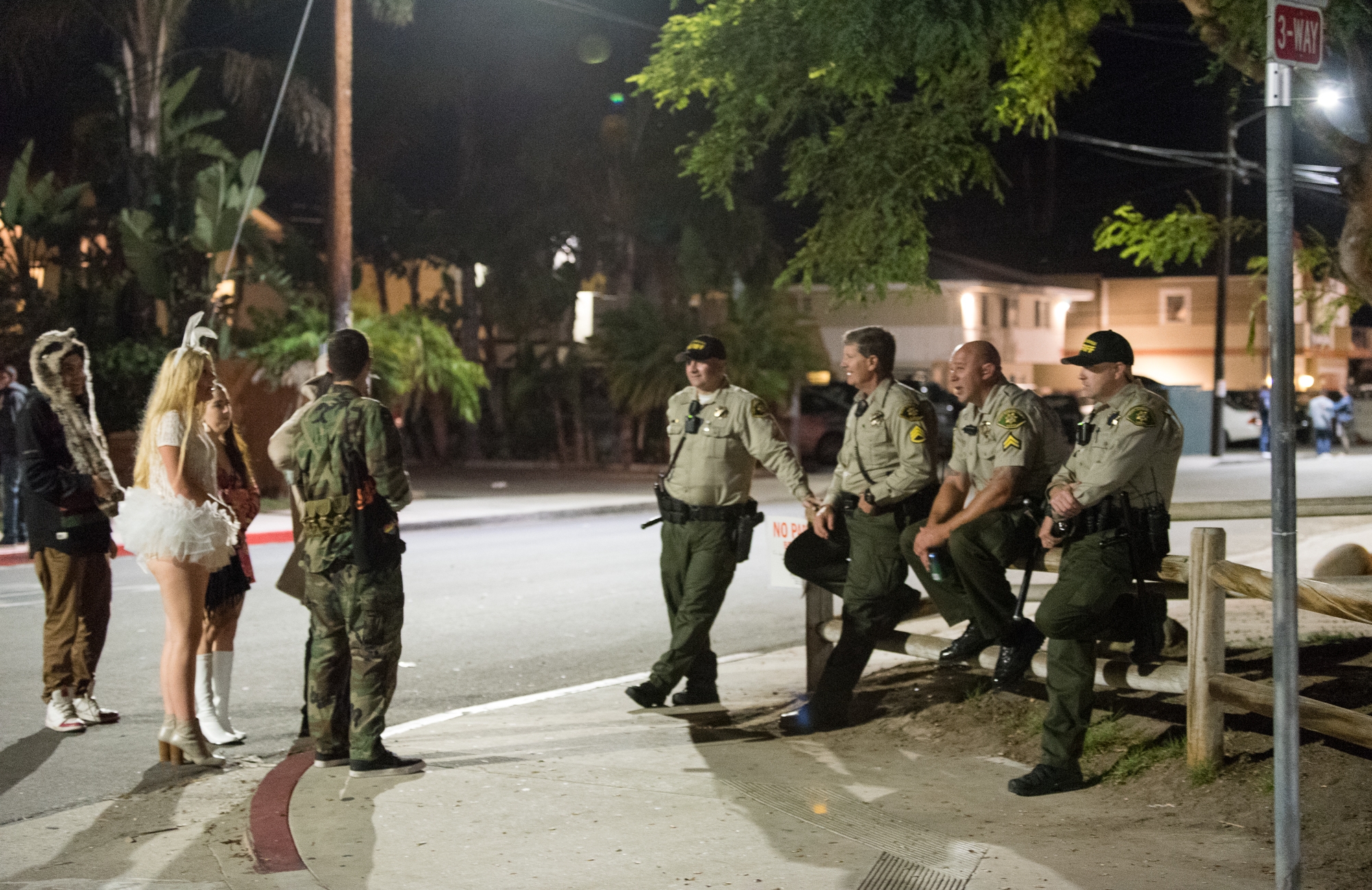 Isla Vista Foot Patrol (IVFP), a branch of the Santa Barbara County Sheriff’s Office (SBSO), plans to install two to four street cameras throughout Isla Vista and upstaff its patrol from between eight and 14 deputies for a usual weekend to 35 deputies during Halloween weekend.

The cameras would be temporarily placed along Del Playa Drive and record footage for the nights of Oct. 28, 29 and 30 before their removal on either Sunday or Monday, IVFP Lieutenant Garrett TeSlaa said. The cameras will only record video without audio and are limited to capturing activity on public property and roads.

These measures are regularly practiced every year by local law enforcement, who have historically increased their police presence and made use of surveillance cameras in I.V. come Halloween weekend, according to TeSlaa.

TeSlaa repeatedly stated that IVFP intends to use the cameras to prevent or aid in the prosecution of serious crimes, rather than minor offenses such as public intoxication, possession or open container violations.

External Vice President for Local Affairs (EVPLA) Hailey Stankiewicz held discussions with IVFP over the last few weeks upon hearing of the entity’s decision, voicing student concerns surrounding privacy and racial profiling and working to persuade them to reverse their plans.

After failing to reach a mutually agreed-upon approach to policing in I.V. for Halloween, Stankiewicz told the Nexus that her office would sponsor a town hall on the subject with panelists from IVFP, SBSO, UCSB Dean of Student Life and Assistant Vice Chancellor Katya Armistead, Isla Vista Community Services District (IVCSD) and Associated Students (A.S.) executives.

IVCSD President and Director Spencer Brandt described Halloween’s place in Isla Vista history in his introductory remarks, reflecting on a holiday celebration that once drew crowds of over 12,000 and now sees little to no partying activity.

“For a decade now, Isla Vista residents have heard our calls loud and clear to have a safe and local Halloween weekend,” Brandt said at the town hall. “The statistics that we’ve seen from law enforcement have shown that there’s really not a whole lot of activity. In 2019, 2018, 2017 and 2016, law enforcement has reported that there’s been no crowd of partygoers in Isla Vista.”

Brandt conveyed his hope that the town hall would serve as an effective method of addressing community concerns around criminalization of minor offenses, privacy issues and harmful relationships with law enforcement.

“When residents are hearing now about larger police presence and police surveillance cameras, they want to have input. People are concerned about their privacy, and they’re concerned about keeping themselves and their friends out of the justice system,” Brandt said.

A.S. Off-Campus Senator Yael Berukhim expressed her confusion and frustration over IVFP’s decision to install cameras for a no-crowd event.

“Everybody leaves I.V. for Halloween, so it’s off-putting when there are all these regulations put on the students, and then everyone tries their best to work around them and work with the police department by simply leaving, and then all the students hear in return is just more regulations,” Berukhim said.

An anonymous person posed concerns over the use of the video footage in criminally punishing people for minor crimes and urged IVFP to sign a memorandum of understanding that the cameras would solely be used to prevent or prosecute serious crimes, such as robbery and assault.

“Will the footage from these videos be used to retroactively punish those who may be on footage committing a minor in possession, public intoxication or other petty crimes? If not, I would like to understand why the Isla Vista Foot Patrol has not signed a memorandum verifying that this will exactly not occur,” Stankiewicz said, reading the submission.

TeSlaa said that IVFP has legal requirements to submit any footage to the courts, if IVFP has knowledge that a crime is captured on camera and the district attorney’s office is pursuing an arrest or citation.

As such, TeSlaa said that the IVFP could not sign a memorandum and that a possibility remains of video footage being used in cases of minor crimes.

“Most people, especially local residents who might be in possession of alcohol, have an open container, those kinds of minor crimes, are going to be in general offered the restorative justice citation rather than entering the criminal justice citation process,” TeSlaa said.

“But to say that we can sign a memorandum saying it won’t be used for this, but it will be used for this, it’s too broad to cover every possible scenario in which video footage may or may not be a part of either a criminal investigation or a mass casualty incident,” he continued.

Third-year English major Yiu-On Li, internal chair of Isla Vista Community Relations Committee, presented the committee’s stance against the use of cameras and brought up issues of privacy and potential expansion of camera use in I.V.

“The consensus from the board is strongly against the new security cameras, so we have three main concerns. First is privacy, of course. The official line is that the cameras will only be used for serious crimes like robbery and assault, but it’s easy to see how things might go beyond that. Second is expansion. The cameras seem to only be going on Del Playa Drive for now … but we are concerned that they might make their way to the rest of I.V.”

TeSlaa said that the entity has the legal right to record anyone on public property without violating privacy rights, based on Supreme Court rulings.

“If you’re on a public street, you have no expectation of privacy,” TeSlaa said.

TeSlaa said he, as the station commander, has no interest in pursuing permanent installation of the cameras, but indicated that temporary cameras may be used for other events.

“We will look at using them during other high activity times such as Deltopia, but again, we look at it on a case by case basis and what our needs are for that specific event.”

“Has whoever will be monitoring the live footage been given bias trainings? How will we be sure that they will not engage in racial profiling?” Stankiewicz asked on behalf of an anonymous student. “As a student of color, I’m extremely concerned about this, and want to make sure that my identity as well as other students are protected.”

TeSlaa elaborated that all deputies undergo racial bias and implicit bias training and said the cameras would not contribute to instances of racial profiling — rather, that the potential for harm is based on the actions and behavior of the deputies.

“I don’t believe that the cameras themselves are going to be an issue in that, it’s really about the behavior of the individual deputy that may provoke some sort of racial profiling. The cameras itself can’t do it — it’s just based on who’s operating the camera.”

TeSlaa went on to say that he holds confidence in the IVFP deputies on patrol not to engage in racial profiling of community members.

“I’m truly confident in our people, and that is not going to be an issue for Isla Vista residents.”

Stankiewicz countered that the use of cameras could easily promote racial profiling, citing a study linking surveillance to greater instances of bias.

“As a fellow panelist on this board, I would like to validate the concerns of this anonymous student that said that they were worried about racial profiling and their identity as a marginalized student, because even statistics by the ACLU have proven that cameras and surveillance can exacerbate issues of racial profiling.”

“In light of the responses SBSO and IV Foot Patrol provided, our office wants to reassure students and the entire Isla Vista community that their voices and concerns are heard and matter,” MacMillan said in the email.

The email circulated a change.org petition, titled “Say NO to Surveillance in Isla Vista!” gathering over 400 signatures as of Oct. 19.

“The EVPLA Office and community members remain frustrated at the lack of clear answers or plans communicated by Isla Vista Foot Patrol and SBSO,” the petition read.

The petition stated that the town hall failed to resolve many of the EVPLA office’s concerns regarding the use of cameras, including IVFP’s reservations about signing a memorandum, how surveillance could contribute to racial profiling and the potential criminalization of minor offenses.

“The EVPLA office’s largest concern is that if SBSO is allowed to install cameras in the Isla Vista community, this could result in increased racial profiling and the increased harassment of our marginalized community members and UCSB students,” the petition continued. “Isla Vista residents and UCSB students must take a stand NOW and draw the line here in order to ensure every Isla Vista resident, regardless of background or identity, feels safe and at peace in their community.”

The EVPLA office is hosting a Know Your Rights Workshop on Oct. 27 at 6:30 p.m. in Embarcadero Hall to prepare students and community members for the heavy policing that accompanies Halloween weekend. The workshop will cover topics of misdemeanor crimes, restorative justice, how to distinguish law enforcement entities, navigating surveillance and drug safety.

“The purpose of this workshop is to provide helpful information relevant to navigating highly policed weekends in Isla Vista like Halloween,” the email said. “Our office’s hope is that this workshop will be a helpful resource to students and community members so that we can all enjoy the spirit and festivities of Halloween safely, and as a community.”