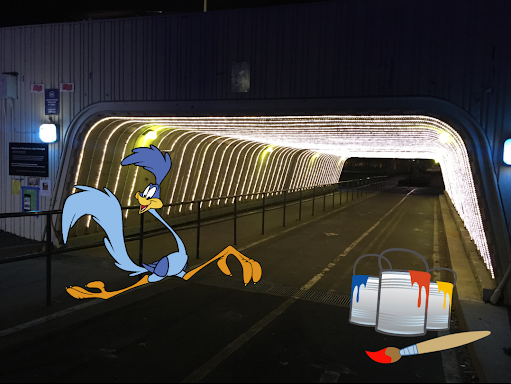 “It looked like the same tunnel I always ride through!!” said Daphne Dauck, “It looked just like Pardall!”

Students are horrified after nearly five of their peers were injured on the bike paths this past weekend. While riding off of campus and into Isla Vista after a long day of class, students ran into the last thing they ever could’ve imagined: a wall blocking Pardall.

This was no ordinary wall, though. The wall was just big enough to cover the exact dimensions of the tunnel so that onlookers wouldn’t be able to tell there was anything behind it. What’s scarier is the wall was intricately painted to look exactly like Pardall Tunnel. The shadows, the cute little lights that blink as you go past, the hand rails, the graffiti on the floor — everything looked the exact same as it always has. Looked at from any angle, the wall was invisible!

“I got a pretty nasty bruise on my leg and hit my head so hard it literally made that stupid ‘bonk’ sound effect!” Dauck continued, recounting her traumatic experience as the first student to make contact with the wall. “I was riding with a couple people behind me, and all of them either hit me or the wall. Within seconds, a cloud of smoke rose up around us!”

Another onlooker who happened to be walking by explained further, “It was awesome. The girl ran straight into what looked exactly like the same old tunnel. All the others followed suit and then there was just a cloud of smoke with cartoon sound effects coming out of it, and a tangle of limbs barely visible outside of the cloud.”

While this event was certainly upsetting, luckily all the Gauchos involved are doing just fine with no medical attention needed. However, this incident certainly cannot be ignored. Gauchos, we as a community must be vigilant for any suspicious looking individuals, especially those carrying big paint brushes and cans of paints, dressed in black and white stripes and have a chilling, maniacal laugh. Also, don’t run into walls on your bikes!

Faith Talamantez’s pupils turn into hearts when she looks at you.