The UC Santa Barbara Police Department was unable to fill the position of Interpersonal Violence Investigator this year, halting a program dedicated to supporting survivors through a trauma-informed, community-oriented policing strategy. 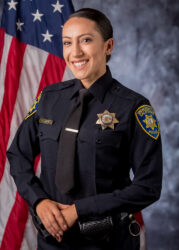 Avila became the first official Interpersonal Violence Investigator in November 2018 and served in the position until her recent departure from the department. Courtesy of UCPD

The role of interpersonal violence investigator is the latest in a list of positions UCPD is yet to fill. Last January, the department was looking to hire over 10 positions but experienced difficulties with its recruitment efforts.

The Isla Vista Community Services District (IVCSD) established the Interpersonal Violence Investigator role in 2018 in partnership with the university and UCPD to directly work with survivors of interpersonal violence-related crimes like sexual assault and stalking.

“This is done in a trauma-informed manner that is centered on supporting survivors of such crimes. The creation of this position is aimed to ensure high-quality investigations for these crimes to lead to more successful prosecutions by the District Attorney,” the IVCSD website stated.

IVCSD Community Engagement Director Sydney Casler said they discontinued the program for the 2022-23 fiscal year due to UCPD staff shortages.

“UCPD is unable to execute the Interpersonal Violence Investigator contract due to staff shortages,” Casler said in a statement to the Nexus. “We hope to bring the program back as soon as UCPD is able.”

In last year’s budget, IVCSD allocated $152,000 for the position, paid for by UCSB grant funding. Funding for the position this year was zeroed in the 2022-23 budget approved on Aug. 23.

“In the budget, notably, the Interpersonal Violence Investigator isn’t funded this year because the position couldn’t be staffed at UCPD but we hope to get back to it,” IVCSD General Manager Jonathan Abboud said at the Sept. 8 I.V. Community Network (IVCN) Meeting.

IVCSD Board Director Kirsten Deshler emphasized that the program’s discontinuation stems from insufficient police resources and does not reflect any lack of commitment to the initiative from UCPD.

“UCPD is severely understaffed right now and is having a difficult time with recruitment,” Deshler said at the Sept. 8 IVCN meeting. “The chief explained to me that they are having a difficult time just fulfilling their patrol and I.V. Foot Patrol positions, so while this is a priority, they literally don’t have the manpower and people are already working overtime.”

“The IVCSD has made a significant impact and provided critical leadership in addressing safety issues in Isla Vista since it was established,” Reyes said. “The University and UCPD are grateful to have the opportunity to work in partnership with the IVCSD on many of their safety initiatives. The interpersonal violence investigator is an important example of this ongoing partnership and has provided tangible benefits to survivors.”

Reyes added that the UCPD is actively looking to fill their current vacant positions, and continue its partnership through the interpersonal violence investigator position.

“UCPD has been actively recruiting police officers and hopes to move forward with the recruitment of another detective to be able to resume this valuable partnership,” Reyes said.

During her tenure, Avila participated in community outreach and education, meeting with Isla Vista and student groups to discuss sexual assault, domestic violence and prevention, according to the IVCSD website. Among the several student groups were Students Against Sexual Assault, Resource for Gender and Sexual Diversity, I.V. Youth Projects and Greek life organizations. Avila also attended Title IX training sessions and meetings with the Sexual Assault Response Team for Santa Barbara County.

Reyes said that until the program returns, UCPD will respond to interpersonal violence-related crimes through “traditional” policing methods.

“We do not have a current timetable as recruiting for a position with the specific skill set and knowledge-base will take time. Until we are able to recruit for the position, these law enforcement services are being provided traditionally,” Reyes said.

The university will continue to offer the Isla Vista Safety Station service, which offers water, phone chargers, rest spots and 24-hour safety escorts, according to Reyes.