Detective Kovena Avila remembers her first patrol ride in a cop car clearly. A student in college at the time and required to participate in a ride along for her class, her only previous interactions with law enforcement occurred during her childhood as she watched police officers take her father away in cuffs. 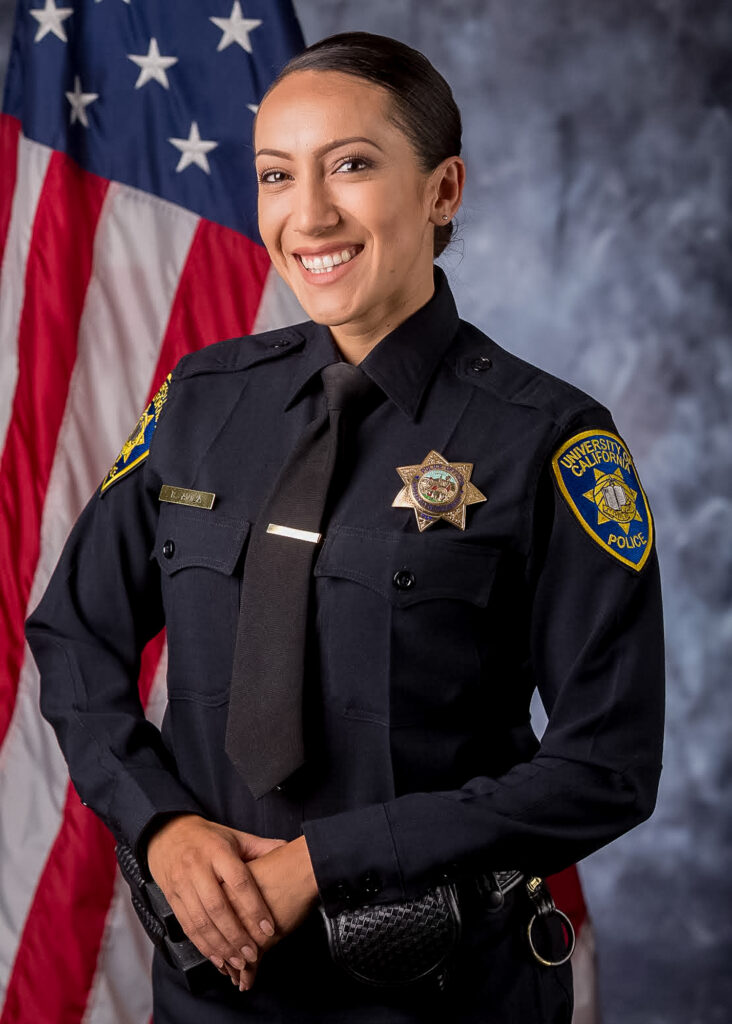 During the ride along, Avila accompanied a police officer who was dispatched to a house to respond to a call about a runaway child.

“The officer was so passionate … gave [the mother] tissue and sat at the dining room table with her, acknowledging all the other siblings and acknowledging their feelings,” Avila said.

Before the ride along, Avila never thought she would become a police officer. Now, this experience from her college years is just one of the reasons she changed her mind about the profession and decided to pursue a career in police work.

“It’s amazing how well you remember that and then you can’t remember what you had for dinner last night,” Avila said, adding that she still remembers the name of the officer whom she accompanied.

Now, a decade later and recently named the first interpersonal violence investigator for Isla Vista, Avila brims with enthusiasm for her position and the community she works in.

The I.V. Community Services District (I.V. CSD) and the UC Police Department created the position in late November. A contract signed by the two allocates funding to a peace officer designated to investigate crimes such as stalking, domestic abuse and sexual violence both on campus and in I.V. with the latter previously falling to the Santa Barbara County Sheriff’s Office (SBSO).

Avila has spent almost four years working at UCPD when she was hired in 2014 after working at Guadalupe Police Department.

Being the only woman at Guadalupe PD for some time, Avila was often assigned delicate cases, such as child sex crimes, through which she began practicing some of the skills needed for handling interpersonal violence cases.

Being a mother and a “people person” are qualities that Avila cites as making herself a qualified and strong investigator for Isla Vista, though she acknowledges that sometimes her passion for helping survivors can be overwhelming.

“Sometimes I think I care too much. I get really attached to my survivors. I get really empathetic about their situation,” Avila said. “People might agree or disagree but I think that is a strength of mine.”

Throughout the duration of her position, Avila hopes to build trust between her and individual survivors as well as the general community of I.V. through community outreach, attending meetings and dispersing information about interpersonal violence.

“I think in general when we humanize the form and the badge and the officer, that barrier diminishes a bit and people are more open to come up to us and inform us of things,” she said.

The implementation of a police officer dedicated wholley to processing interpersonal violence cases is a victory to several groups and individuals in the community, such as Briana Conway [[ok]], director of Campus Advocacy and Resources Education (C.A.R.E.), and Standing Together to End Sexual Assault (STESA).

Relationships between survivor advocacy groups like C.A.R.E. and STESA with UCPD are crucial for informing survivors of their options with cases and facilitating difficult processes involved in case investigation, according to Conway.

“When an advocate and law enforcement have a really smooth working relation, the likelihood that a survivor’s going to want to stay in that process is greatly increased,” she said.

Efforts to solve cases are now more streamlined, reducing the number of times survivors have to tell their stories. Cases are also less likely to slip through the hands of officers who often have other cases that take higher priority.

“To be able to have that compassionate connection to at least explain the legal process from their expertise could just be really helpful in the [survivor’s] decision-making process as well,” Conway said.

Conway has worked with Avila since she began at UCPD and describes her as an “incredibly kind and patient” officer.

“I can say wholeheartedly, from how she treats survivors, [her work is] remarkable and wonderful, and survivors are in a much better place getting to speak to someone like her,” Conway said.

Despite her qualifications and support from community members, Avila acknowledges there are personal challenges that lie ahead in her demanding position. Being what she calls a “feeler,” Avila knows the realities of her job and her attachment to survivors takes a toll on her emotional health at times. She admits she sometimes cries about her cases.

After particularly difficult days, during the hour-long drive Avila makes from I.V. during the week, she listens to music, de-stresses from work and enjoys the scenic route back home.

For Avila, it’s the small things that go a long way and make her passionate about her job. “Thank yous” and smiles are things she receives from survivors that are particularly rewarding.

Correction [Nov. 28, 7:21 p.m.]: Avila’s training included a drug endangered children course, not a “drug and danger children course,” as stated in a previous version of this article.

This is an awsome initiative that has been needed for a long time. This is a nice community policing example that should be held as an example. You can’t ask for a more qualified Officer who is humble, approachable, and very empathetic and kind. As a victim of sexual violence this is a step in the right direction.

This reporting style is quite odd. I understand the need to humanize this officer, as there is a distrust among students and police in IV. But the part about exercising, de stressing, etc, may I ask why this is included?

Why is it necessary to find fault when someone is extending themselves to serve others. I just don’t get it! As for me, I am grateful for caring and compassionate officers. It makes a difference!