The Daily Nexus
News
After Keeping It Secret For Years, UCSB Welcomes Tours of its Munger Hall Mock-up
July 27, 2022 at 2:29 pm by Mark Alfred and Asumi Shuda

For years, UC Santa Barbara has been suffering through a housing crisis as new admissions outpace available bedspaces. In response, Charles Munger offered a solution to ease the housing strain in 2016: two six-story dormitories of his design that would replace the Channel Islands 5 residence halls.

Unique to the billionaire’s proposal was a windowless design, with artificial LED windows illuminating student bedrooms. Should the project move forward, his offer would include an enticing $200 million donation, a fraction of the construction cost expected to top $1 billion.

The 2016 proposal was met with swift backlash, and plans to construct the two dormitories were eventually abandoned. Undeterred, Munger and the university quietly began incorporating elements of their initial design into a new project, what would become the modern Munger Hall proposal which is set to begin construction early next year. 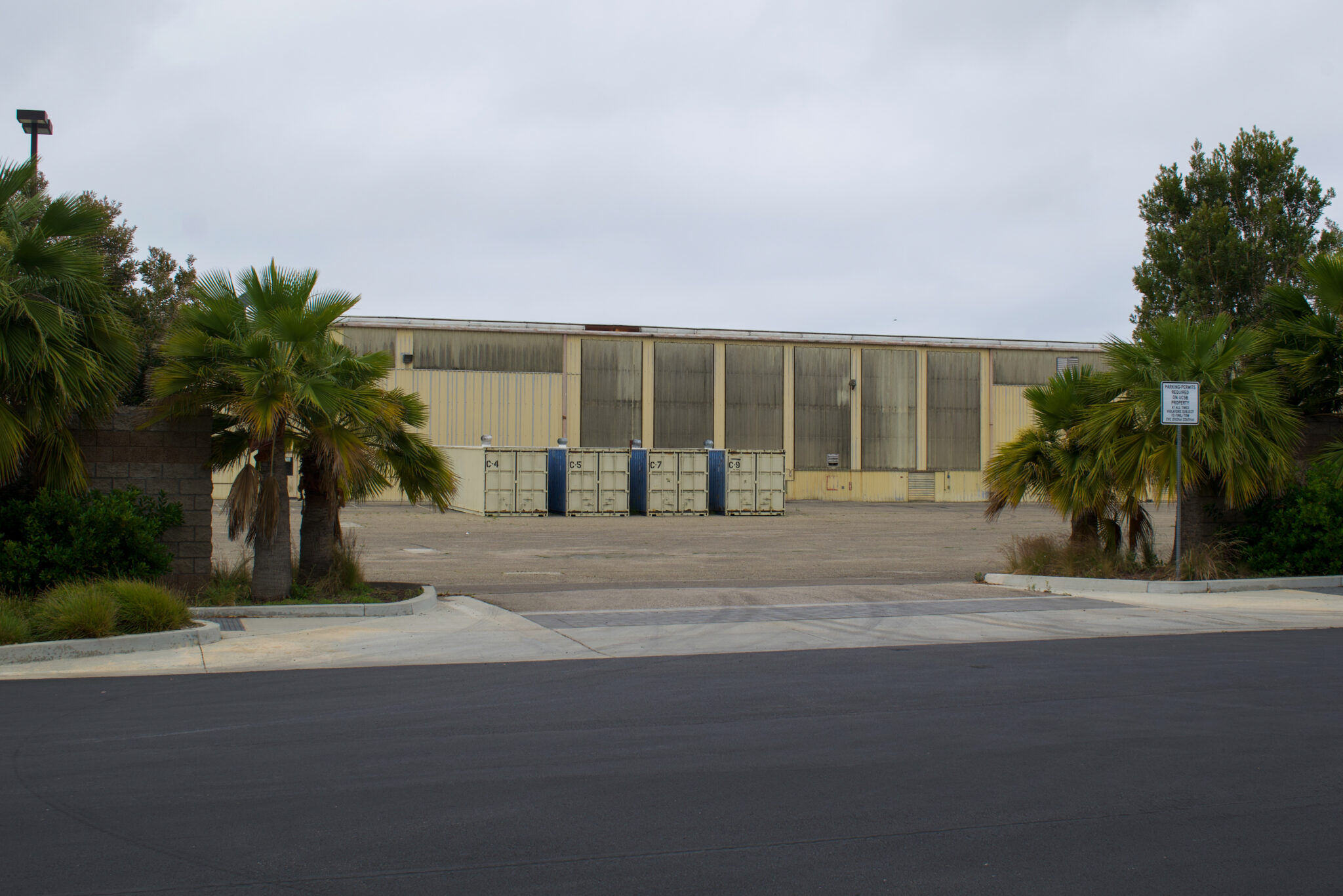 To refine its design in response to the feedback in 2016 and 2017, work on a mock-up of the new hall began in secret, making use of UC Santa Barbara’s existing facilities management warehouse on 389 S. Los Carneros Road. The undertaking was funded entirely by Munger and constructed by architects of his choosing, according to UCSB Media Relations Manager Kiki Reyes.

Images from inside the mock-up were leaked to the Nexus last November, with further details uncovered in April. Spring Quarter 2022 saw a number of campus groups tour the mock-up ahead of general student tours, which began in June. Faculty and staff are also able to sign up for tours and “tours for community members are coming soon,” according to the university’s tour sign-up page.

The Nexus was granted a tour of the facility in June on the condition that only photos and approved quotes from the university be used. 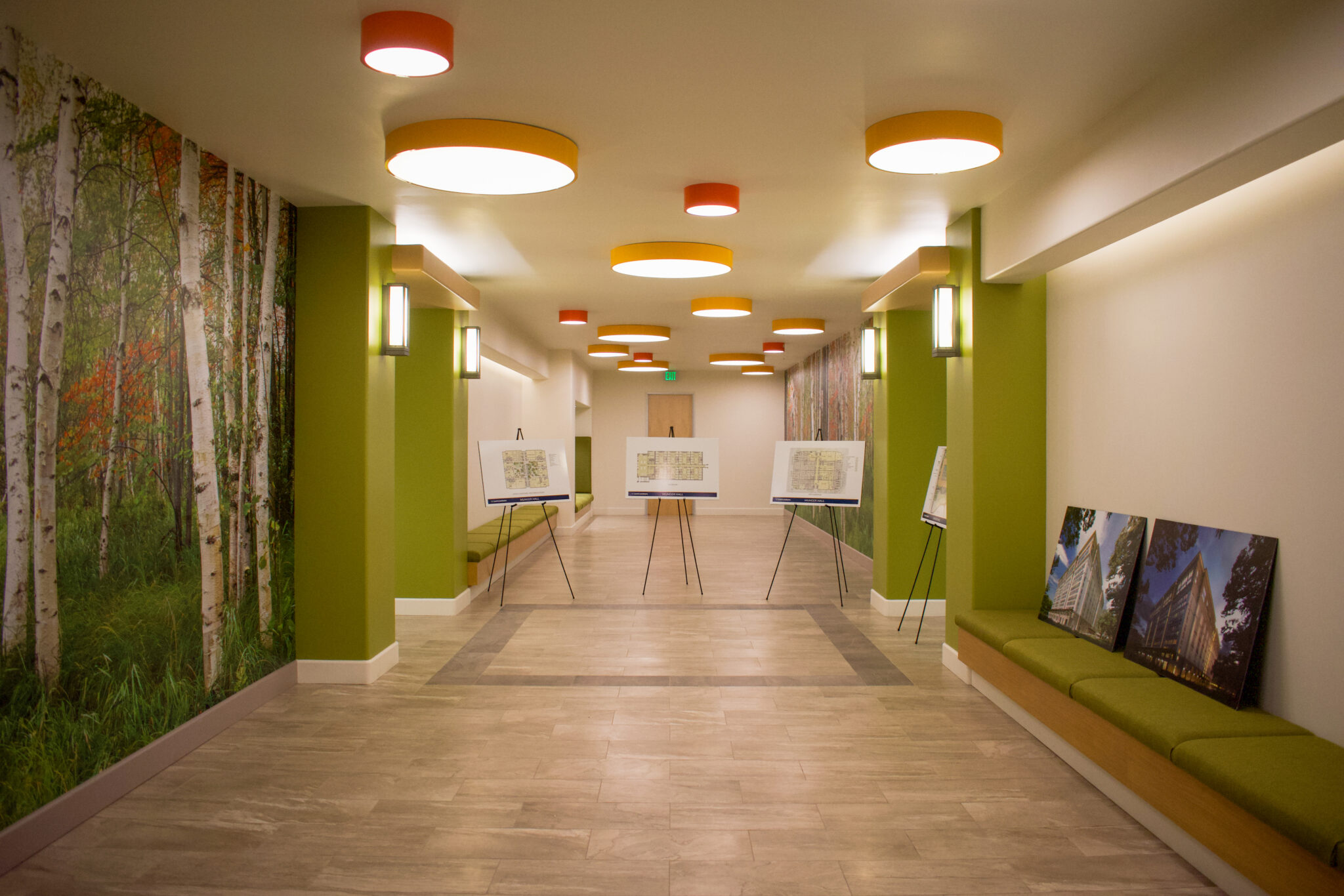 Upon entering, visitors are greeted with a hallway and schematics for the latest design of the dormitory. Should Munger Hall be constructed, it would feature a central corridor four times as long on each floor, running the entire length of the building north to south. The hallway would link blocks of dorms — dubbed houses — to each other and the building’s twelve elevators. Each floor would contain eight houses, accommodating a total of about 500 students per floor.

All 11 stories are connected by 10 stairwells for “evacuation purposes,” according to Reyes, with elevators serving as the primary transport between floors. 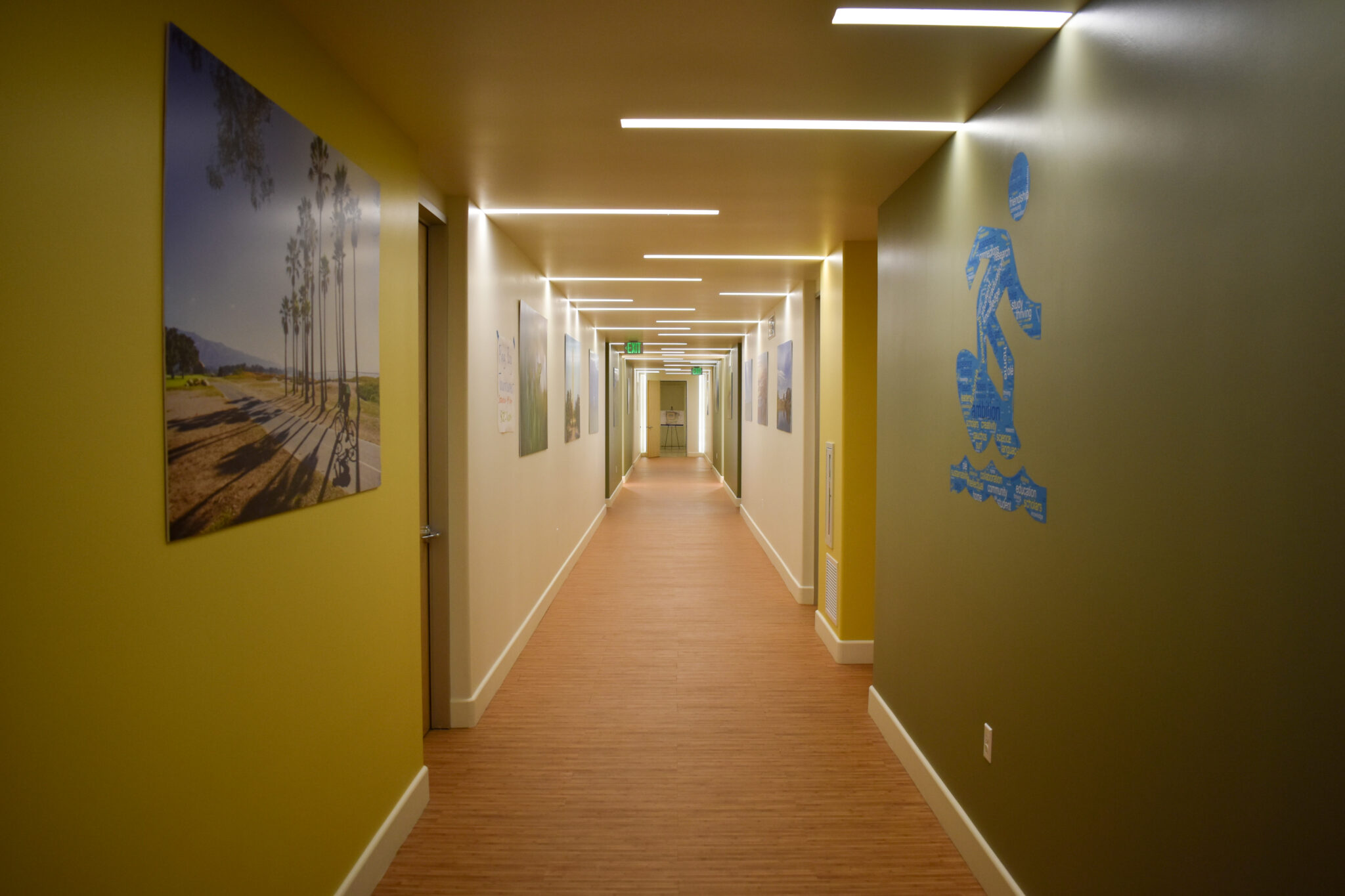 The main hall leads to one mocked-up house, where 63 students — including a resident advisor (RA) — would live. Each house has a shared kitchen and common area, called the great room, connected by hallway to eight suites of dorms.

Most of the bedrooms would not have operable windows and would instead have an LED wall panel that changes in color tone and intensity based on a standard circadian rhythm cycle. 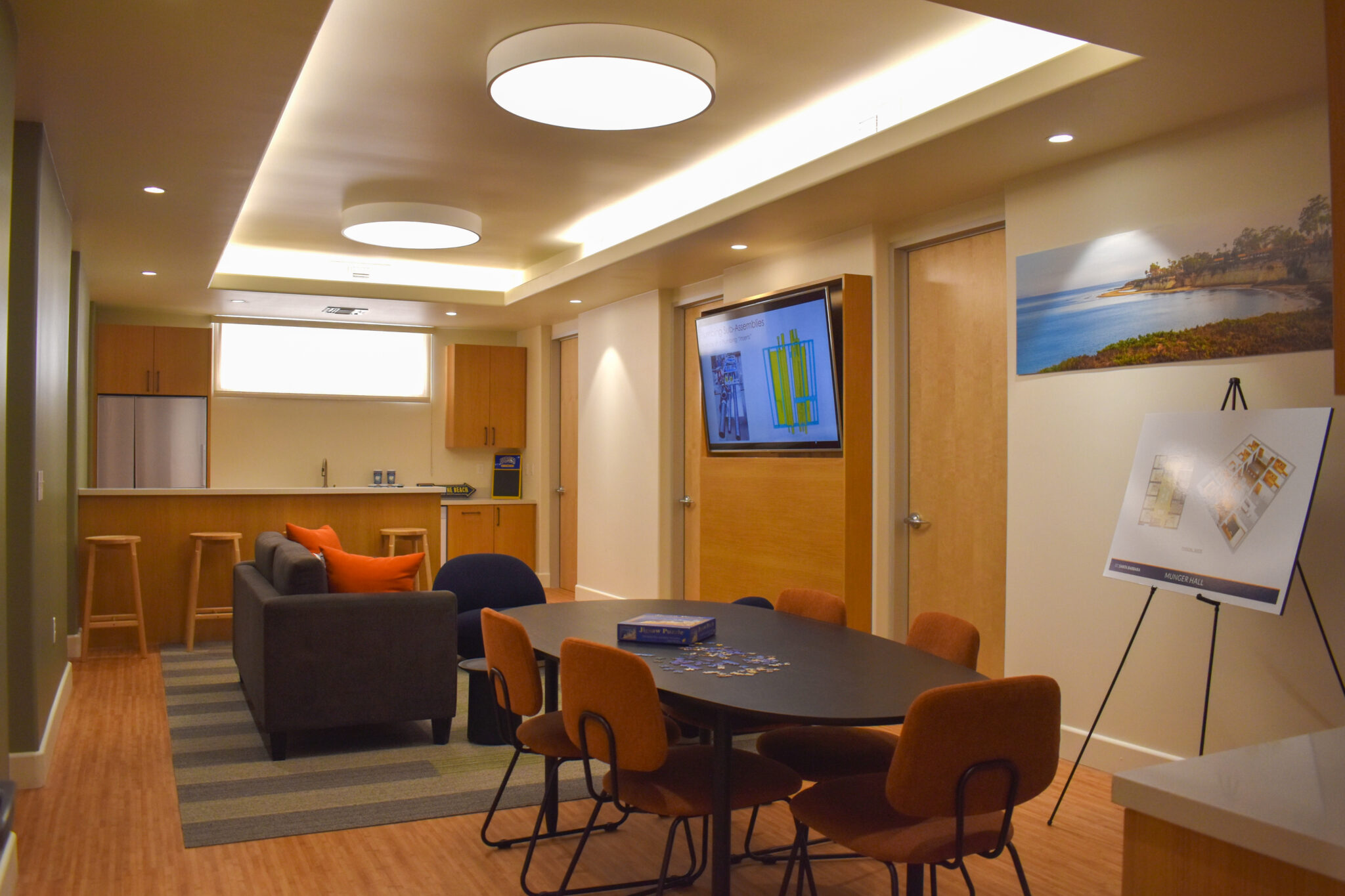 Shiuan Cheng / Daily NexusThe typical bedroom suite would consist of an eight-bedroom and two-bathroom pod with a common area that includes a living area and a dining area with counters and two refrigerators. Eight suites would be set up along the house’s hallway, leading to the common area for all 63 students.

The university expects that students will be able to self-select what students they want to live with if they choose, similar to the current selection process in university apartments and dorms. 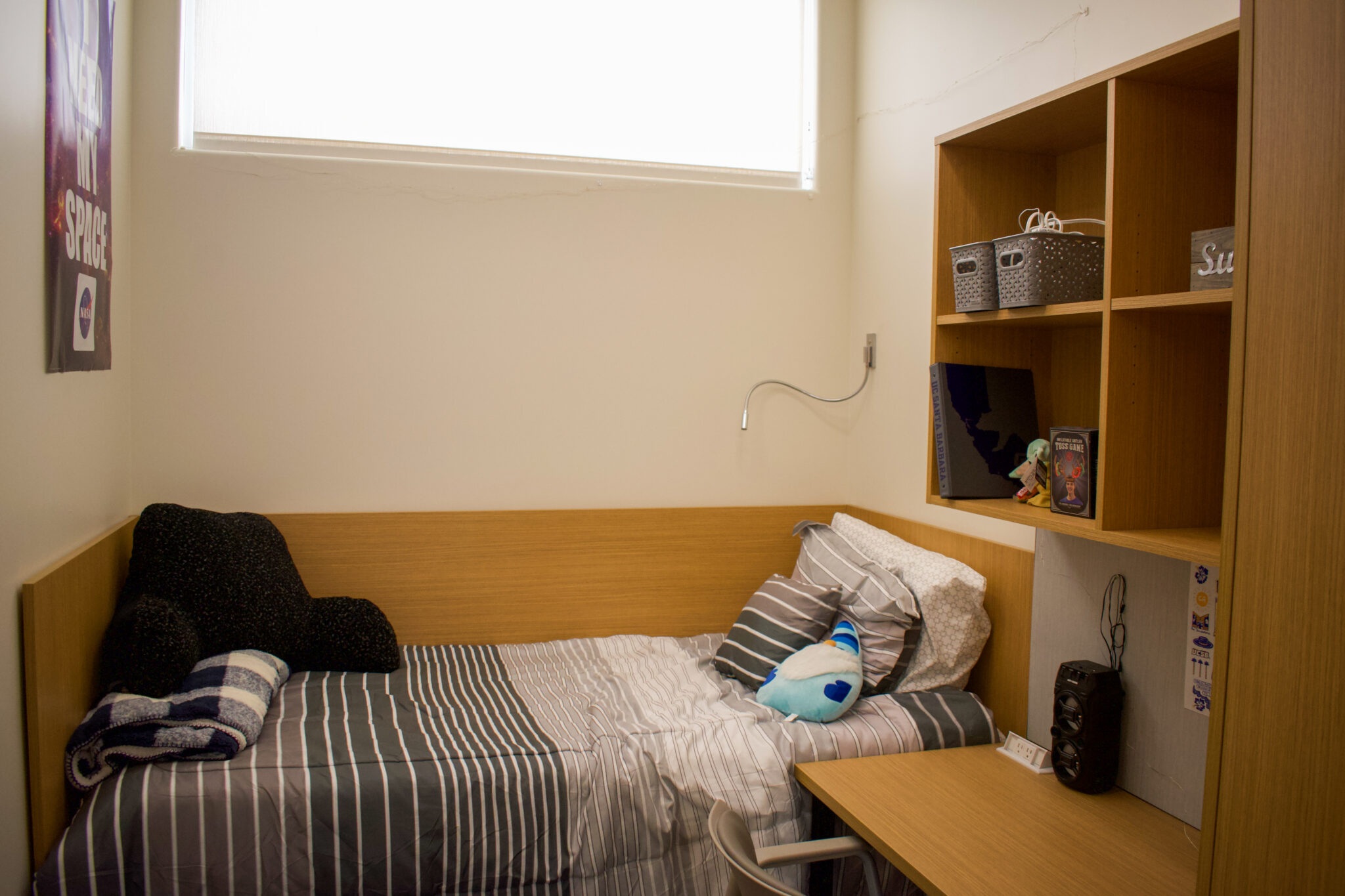 Each house will contain 62 7-by-10-foot bedrooms as well as an RA bedroom with double the floorspace and two doors leading to the common room and the main hall. As per Munger’s decisions, every bedroom would be single occupancy, with one twin XL bed, a desk area and storage space taking up the majority of the bedroom. 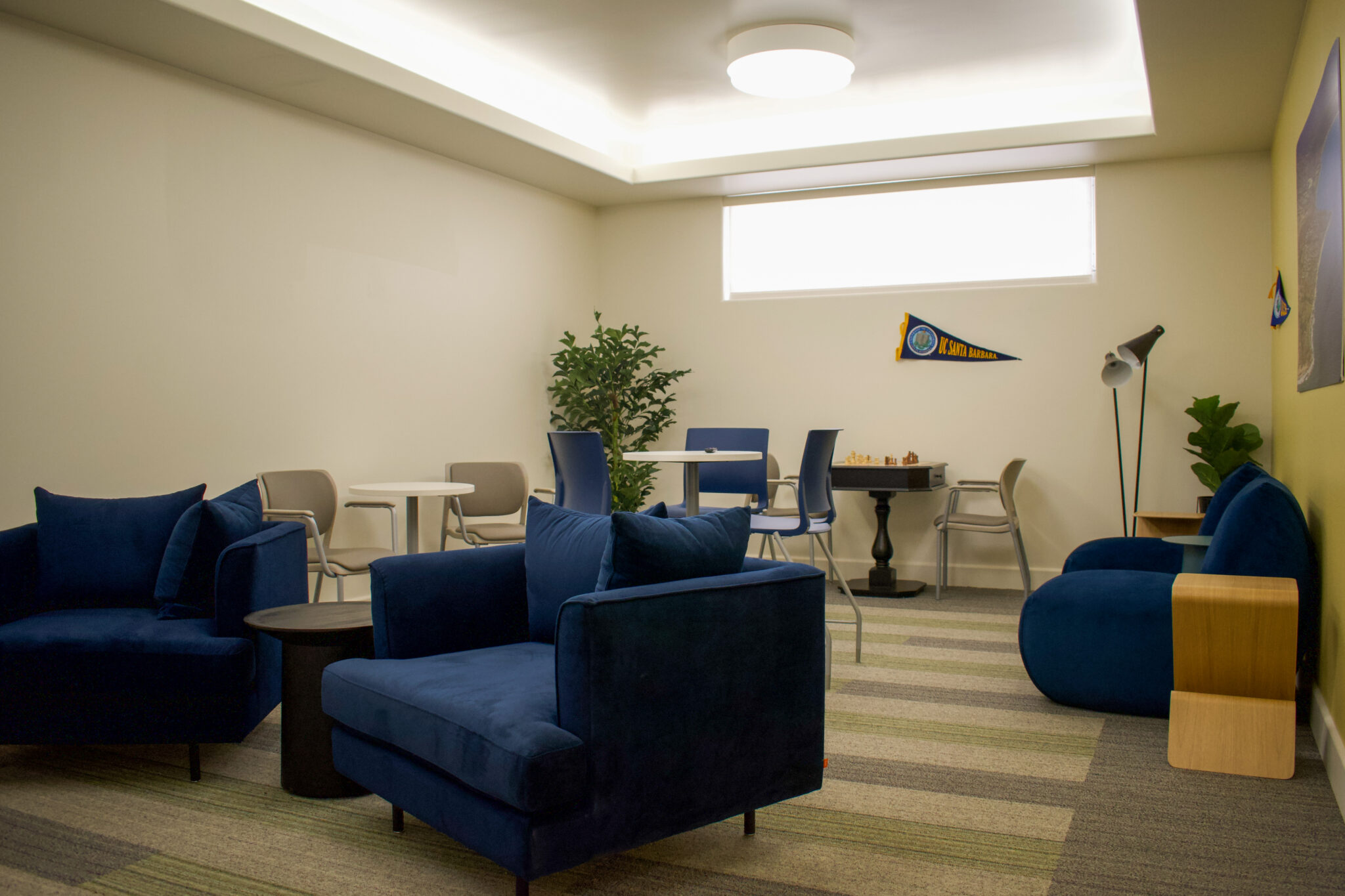 Each house also includes a game room with a television set, sofa chairs and game tables, like chess. Students are encouraged to use this space to mingle, utilize the gaming sets and watch sports games on the television, Reyes said. 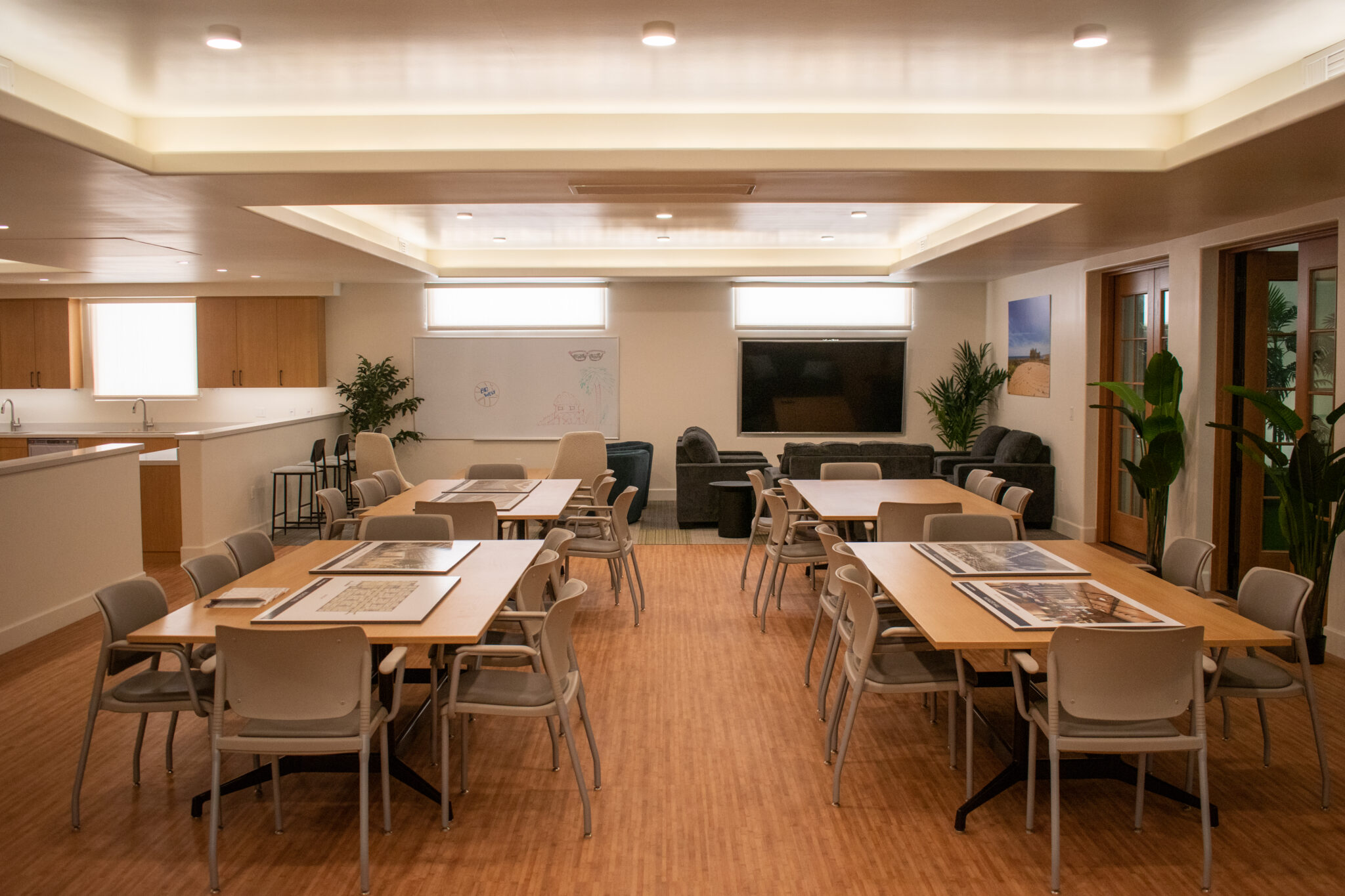 The main hall eventually leads into the great room, which will function as a large shared space, where the 63 students living in single-occupancy rooms are encouraged to socialize in. 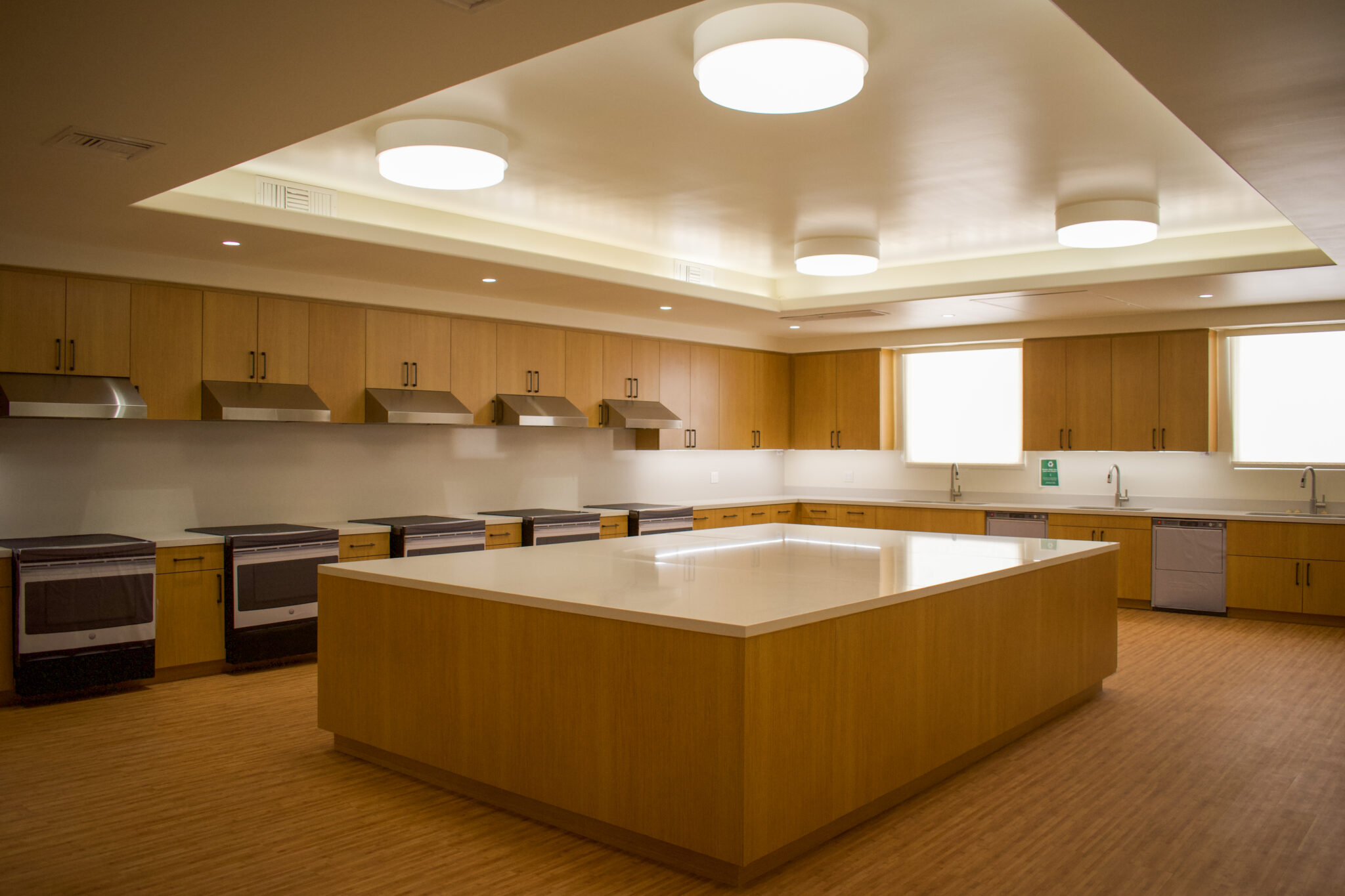 The vast, 27,000-square-foot space includes a kitchen area with five stovetops, extensive counter space — similar to a large restaurant kitchen — six sinks, six large dining tables with gaming and lounge areas on each side, and two public restrooms for visitors. 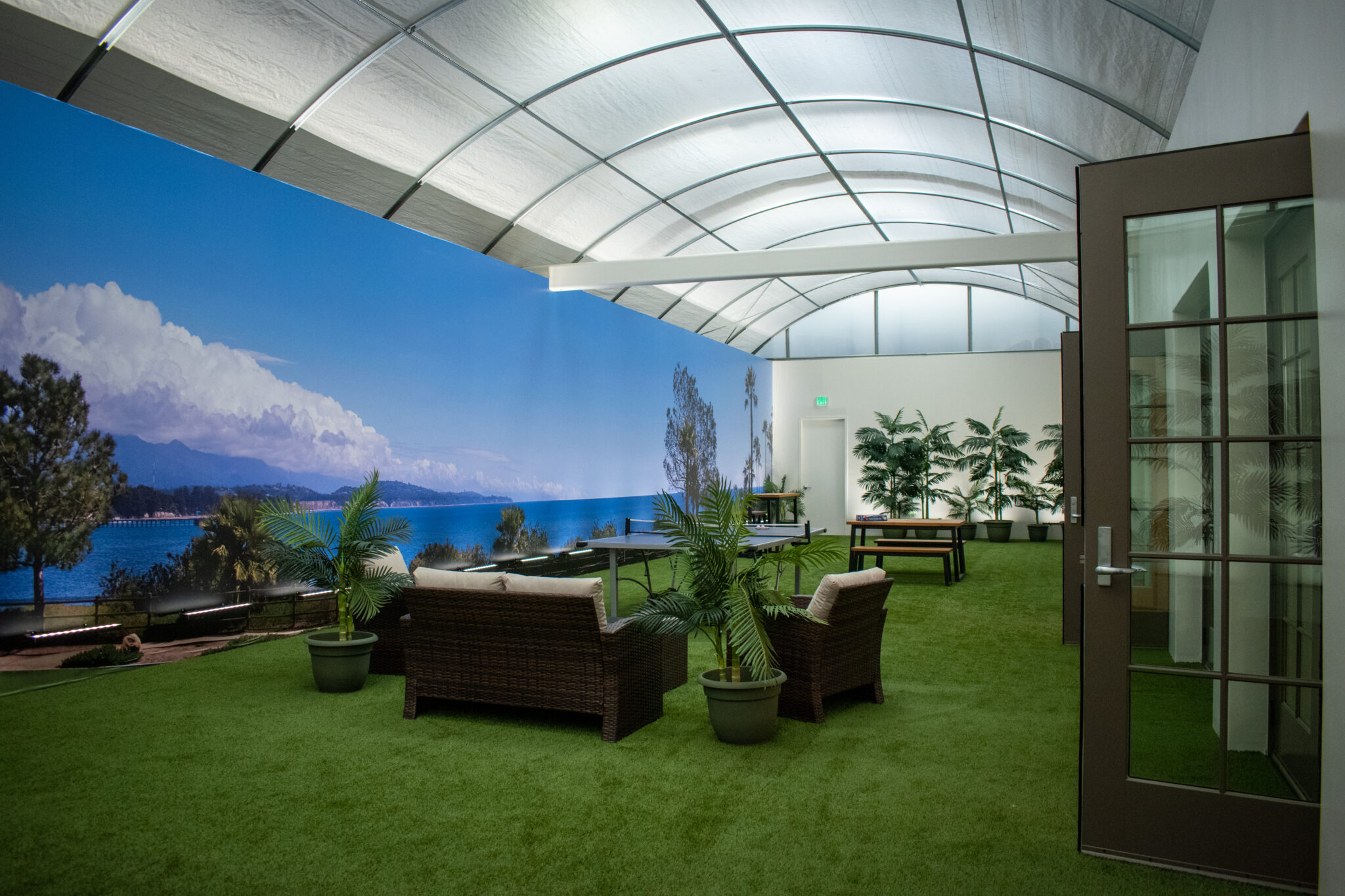 Houses on the second floor of Munger Hall will each have their own exclusive exterior balcony — with turf lining the flooring, lounge chairs and game tables — and a view of the UCSB coastline. Students not living on the second floor will not have this balcony.

A slew of amenities are advertised on brochures given to students and staff that tour the mock-up, including a state-of-the-art fitness center, a 40-seat screening room, a demonstration and teaching kitchen, a full service grab-and-go market and mental health counseling rooms.

“Traditional and ‘virtual’ windows” are listed under bedroom features, along with a desk and “personal wardrobe.” The building itself will feature a theater, mail pickup lockers, a pet washing room and an open-air landscape courtyard on the top floor.

The university expects to be flush with new bed spaces upon Munger Hall’s opening to the point that it will “eliminate the need for triple rooms in all other on-campus residence halls.”

If they’re going to build bunker-style dorms, at least build it underground so they can build decent housing on top of it.

Makes $440 to $780 per day on-line work which i received $21894 in one month online performing from home. I’m a daily student and work just one to a strive of hours in my spare time. everybody will do that job and online raise extra cash by simply

I am making $92 an hour working from home. i was greatly surprised at the same time as my neighbour advised me she changed into averaging $ninety five however I see the way it works now. I experience mass freedom now that I’m my non-public boss.
That is what I do… http://www.richzone9.com

I have made $100 every hour in one day.That was my ideal day in my life and my boss was very content with me..CNN is additionally intrigued from my work and is very happy..check further subtleties by open the underneath site..
go to this link…………… https://www.WORKSCLICK.com

I used to make $386,000 per year as a full-blown overpaid underachieving Zionist whore professor at the unaccountable criminal UCSB Mafia Whorehouse. The only conditions were that I turn a blind eye to the Zionist murders of 3000 Americans in my face on 9-11, never demand that NASA prove before independent Citizen witnesses an EVA spacesuit in a vacuum chamber at 1 microtorr and never ever point out that there’s not a single documented gas chamber and that the holocaust is a hoax.
Also never say: FREE URSULA HAVERBECK! It’ll get you permanently banned off Twitter too.