Billionaire Charles Munger donated a record-breaking $200 million to UCSB on Thursday, designating the funds for a state-of-the-art on campus residence hall.

Munger’s donation will be used as a seed fund for two development projects at UCSB, utilizing 28 acres of land where the Santa Cruz, Anacapa, Santa Rosa, San Miguel and San Nicolas dorms currently exist. Speaking at the UC Regents meeting, Munger said he envisions the dormitories as “the best undergraduate housing in the world.”

As Vice-Chairman for Berkshire Hathaway, Munger is currently partner to one of the world’s richest people, Warren Buffet.

The construction is designed to reduce undergraduate housing costs by as much as 60 percent, and plans for two six-story buildings built on a base of pre-cast concrete. The buildings will have kitchens to reduce meal plan costs, and the top floor of each design will be dedicated to six acres of common room space.

“Every campus I know of in the world abuses its undergraduates … it finally gets pretty gross,” Munger said, emphasizing the importance of healthy living areas. 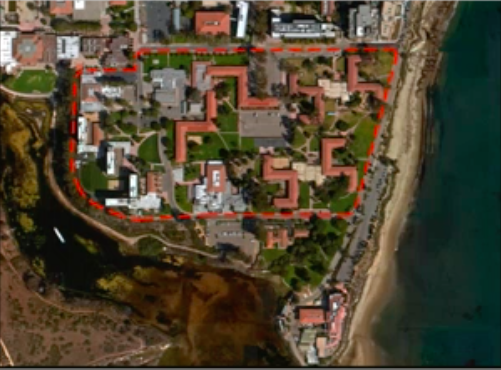 To accommodate for high student density, Munger plans to replace real windows in several rooms with artificial windows, inspired by artificial portholes on Disney cruise lines which feature “a starfish that comes by and winks at your kid,” said Munger.

Matilda Mead, third-year psychology major and Residence Hall Association President, said although “overwhelmed by his generosity,” she was disappointed by the conditions of Munger’s donation.

“By replacing the those views with his artificial windows, it seems to me as though we would be neglecting our residents from experiencing a large aspect of what they came to UCSB to see: the picturesque scenery,” Mead said. “Besides, I highly doubt any artificial windows would be able to replicate [or] replace our spectacular sunsets.”

According to Mead, mental health and academic resources are “severely lacking” on campus, and the best use for Munger’s donation would be to build additional support spaces for students.

“I just hope he can look at the whole picture and focus on the needs of our residents rather than the aesthetics of our university when determining where his donation will go,” Mead said.

UCSB Chancellor Henry T. Yang said the university is “beyond overwhelmed” by the donation, and Munger is creating a “second-to-none living and learning environment” by focusing on academic excellence and personal well-being. 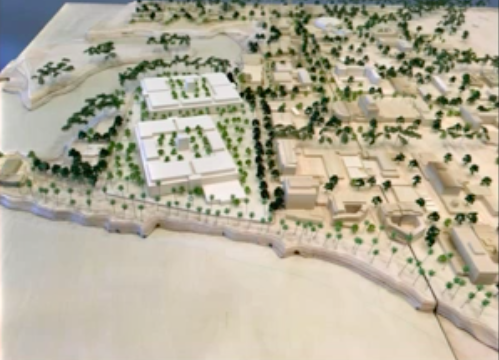 A slide from Charles Munger’s presentation at the UC Regents meeting on Thursday, showing the location for the new proposal.

Munger is willing to donate more funds to the project as they become necessary, but said the UC will be responsible for an “immense” portion of the funding. Munger expects the plan to cost more than $1 billion, but told the regents that the dorms will be “worth more than twice what you pay for them the minute they’re up.”

The proposal is part of the UC’s Long Range Development Plan (LRDP), and Munger will work with the Regents to submit the proposal to the California Coastal Commission (CCC), which regulates land use in several oceanside zones, including UCSB.

CCC representative Sarah Christie said because the plan is in preliminary stages, she cannot comment on their final decision, but the group will address the construction after the UC amends their development plan.

Munger, whose grandson graduated from UCSB in 2013, most recently donated $65.9 million to create a residence for visiting scholars at UCSB’s Kavli Institute for Theoretical Physics. If the UC does not continue to support him, Munger will go elsewhere with his plan, but he is enthusiastic about developing at UCSB.

“The UC System has the power of eminent domain,” Munger said. “If it really makes sense to revolutionize housing for the better on one campus, it can be done on other campuses.”

[Correction: An earlier version of this article did not include San Miguel and San Nicolas dorms in the list of residences that will be replaced. The article has been updated accordingly.]

200 Million given and the person quoted on the issue insults virtual Windows and new dorms? Walk outside if you want nature’s experience, this is an amazing donation worth massive praise.

Have there been studies about the psychological effects of living in a windowless environment? Even if you can “walk outside”–sounds like we’re providing students a cell block with all the ramen they can carry from IV Market. But hey, it’s cheap, right?

Right idea, wrong location. Questions: how to make up for the current 2000 (?) student spaces this project would replace? What’s the current value of those buildings that would need to come down in order to put the new towers up? Curious to see some real numbers–how much would it cost students to live there? Excited to hear some new ideas and the idea of an entire top floor lounge. It seems like it would be more bang for your generous buck on a different location, one that isn’t as environmentally sensitive on top of the bluffs and one that… Read more »

I lived at the dorms at UCSB. I never thought they were gross. I don’t know if they’ve deteriorated since 2008, but they were just typical college dorms when I was there. I appreciate the donation, but I’d like to know what strings are attached to it.

I’ve been here since 2013 and they are not gross. I’ve been to other campuses and the quality is equal if not better. I think reducing costs sounds amazing, but his donation will still cost the university and the window details sound awful. I agree with the person above saying it sounds like a prison. Housing in Santa Barbara typically lacks AC which is usually considered a feature of more “green” living spaces. How in the world will students stay cool on hot days with fake windows? And yes, Santa Barbara has lovely weather, but like most of the campus… Read more »

What an idiotic waste of money. Use that money to hire new professors and create new classes so undergraduates aren’t stressed about graduating. The dorms were fine.

The proposal current concept sounds like it will likely exacerbate the problem of “gross dorms”. I am assuming that the cruise line panoramas will be limited to study or lounge areas as these type of “windows” would not be allowed in the student living units per current California building code let alone meet the green building objectives that the University has committed itself to. The cost of student housing is not driven from the top down, it is a market driven phenomenon. Ironically the users are the ones inadvertently driving cost of housing up as Universities feel compelled to add… Read more »

Solar Panels for those flat roofs? of course not…

Great news for UCSB to finally have a big time benefactor! This could be a game changer for the school. Disappointing to see the 1 student interviewed, head of residence halls no less, criticizing the donation. Dear UCSB students, beggars can’t be choosers. If you want windows, move. When someone hands you $200 million dollars for buildings, smile and thank them.

Typical responses in here from numerous UC spoiled and entitled brats! Personally, I think he should not waste his money on another UC that produces UNEMPLOYED-NON CONTRIBUTING TRUST FUND BRATS but donate it to a CSU that seem to produce the real THINKERS and INNOVATORS need for a 21st Century economy. I’m sure a San José State University which produces most of Silicon Valley’s employable workers and thinkers would gladly accept the GIFT and put GREAT use to it. More bang for the buck and a helluva lot less lip!

Ecological nightmare–why tear down 5 buildings to build another one?

The student “concerns” are just another reason I hang up the phone when UCSB calls me to solicit a donation. Thanks for your money, but you must do things the we the students say are important. I hate to sound like my neighbor, a 70 year old fellow, but ,enough of the whining and demanding students.

These complaining students make me ashamed to be a UCSB alumnus.

Bold statement. I wish you never went here either.

I graduated from UCSB in the mid 80’s, and I vote for keeping UCSB and its campus surrounding, including IV community “primitive.” This is what gives UCSB campus the kick back feel that other UCs lack; such as, UCLA. I lived in the Santa Rosa and San Rafael dorms with windows and fresh ocean breeze was ideal for my soul. I believe, the proposed fancy high rise dorms will clash with the natural aesthetic of this unique beach univesity. As a college student, all I wanted was to get an education, surf, and date cute girls. The proposal to install… Read more »

It seems to be that Munger is just looking for someone to pay 80% of the cost of his ridiculous architectural dream. UCSB would be well advised to get good lawyers before taking the “gift”, lest they end up losing their entire budget building this boondoggle.