The Daily Nexus
On the Menu
Reflecting on PLNT PWRD MRKT’s Short Time in Montecito
June 16, 2022 at 10:21 am by Stephanie Gerson

Even today, with the growing popularity of plant-based diets, grocery shopping as a plant-based eater poses its challenges, especially at big-box stores. Meatless products are often overpriced and understocked. Plant-based products are scattered across many aisles; finding the exact items you need turns regular shopping into a scavenger hunt. After noticing the limited selection of plant-based products in larger supermarkets, Santa Barbara locals Tim and Kami Morton-Smith and Sam Benon saw this struggle for plant-based eaters as a business opportunity and opened PLNT PWRD MRKT, a plant-based market in Montecito. 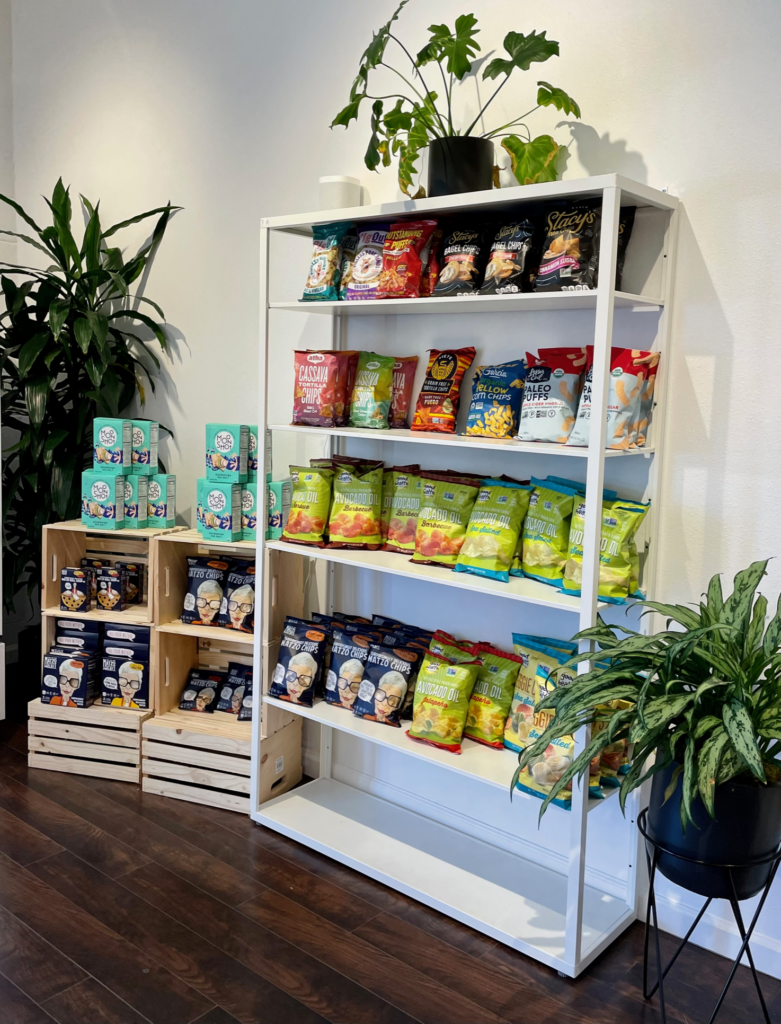 An assortment of vegan and paleo-friendly snacks filled one of the many shelves in the market. Stephanie Gerson / Daily Nexus

Specialty markets are a growing niche in the food industry. During the pandemic, many people went through lifestyle changes and reevaluated their health, creating a higher demand for healthier products that could also accommodate different diets. Benon has a strong sense of how to operate a market; his family has been involved in the grocery business for 40 years, Benon himself having worked for Trader Joe’s for a considerable amount of time. He joined forces with Morton-Smith, who introduced the business idea, and the duo set out to open the first plant-based market in Santa Barbara County. Morton-Smith emphasized that PLNT PWRD MRKT was created to introduce people to plant-based eating in a way that was approachable, exciting and accepting. PLNT PWRD MRKT hoped to bring in regular customers who were plant-based or meat eaters with open minds.

I visited the store the weekend before it closed and felt both comfortable and excited by the displays of interesting products I had only ever seen on my Instagram feed. An inviting decal that spelled out “Discover the Alternatives” stretched across the front window. Sleek, white shelves housed various plant-based baking mixes, spreads, superfood powders and vegan cookbooks. A wall of faux foliage and a “PLNT PWRD MRKT” neon sign decorated the back wall. 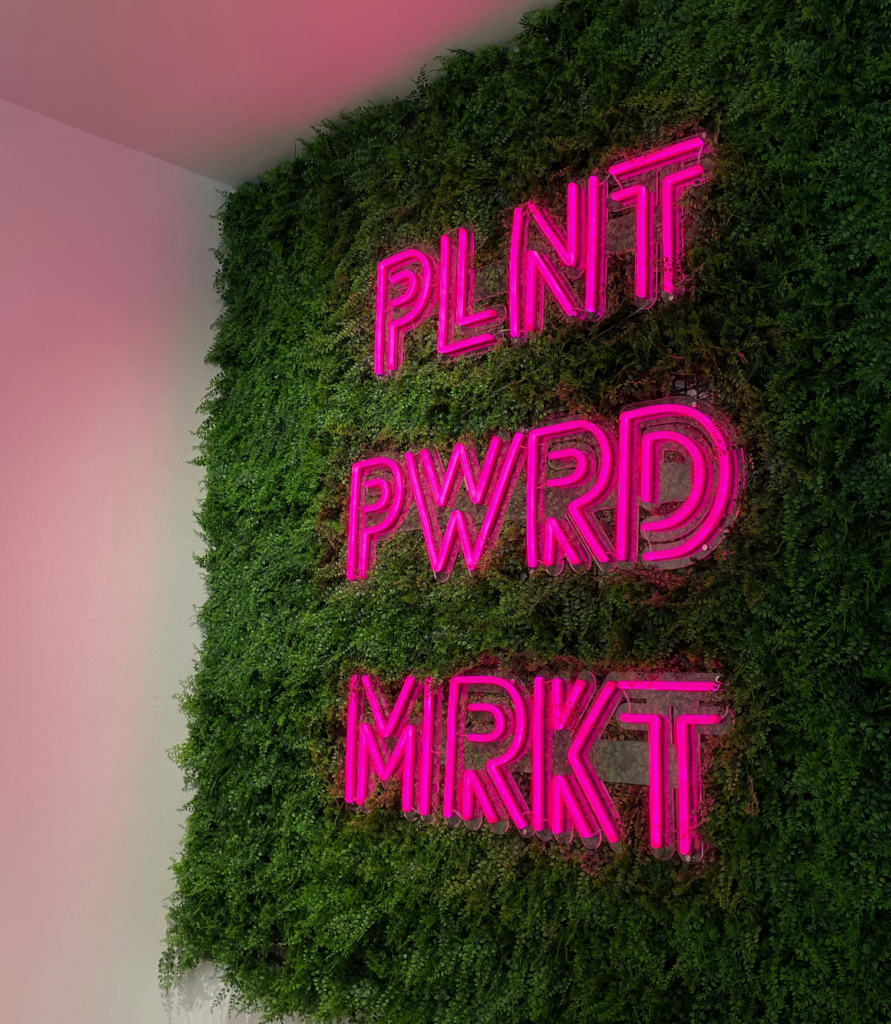 A custom neon sign behind the cash register was created for the market. Stephanie Gerson / Daily Nexus

There were no overcrowded aisles, disorienting fluorescent lighting or bulky shopping carts. It was incredibly easy to see every item, unlike in a big-box store where products are often piled on top of each other and tucked away in the depths of each shelf. PLNT PWRD MRKT had a variety of refrigerated goods, such as oat milk, vegan cheeses and kombucha that were housed in coolers around the store. Themed display tables in the middle of the store highlighted specific products that customers might have typically glanced over while shopping. There was a vegan bath and body table and another table with a selection of artisanal cooking oils and seasoning. Each display felt very intentional and thoughtful. I left with a jar of Oat Haus Granola Butter and an Olipop Sparkling Tonic. This was the pleasant experience I had been longing for when grocery shopping. 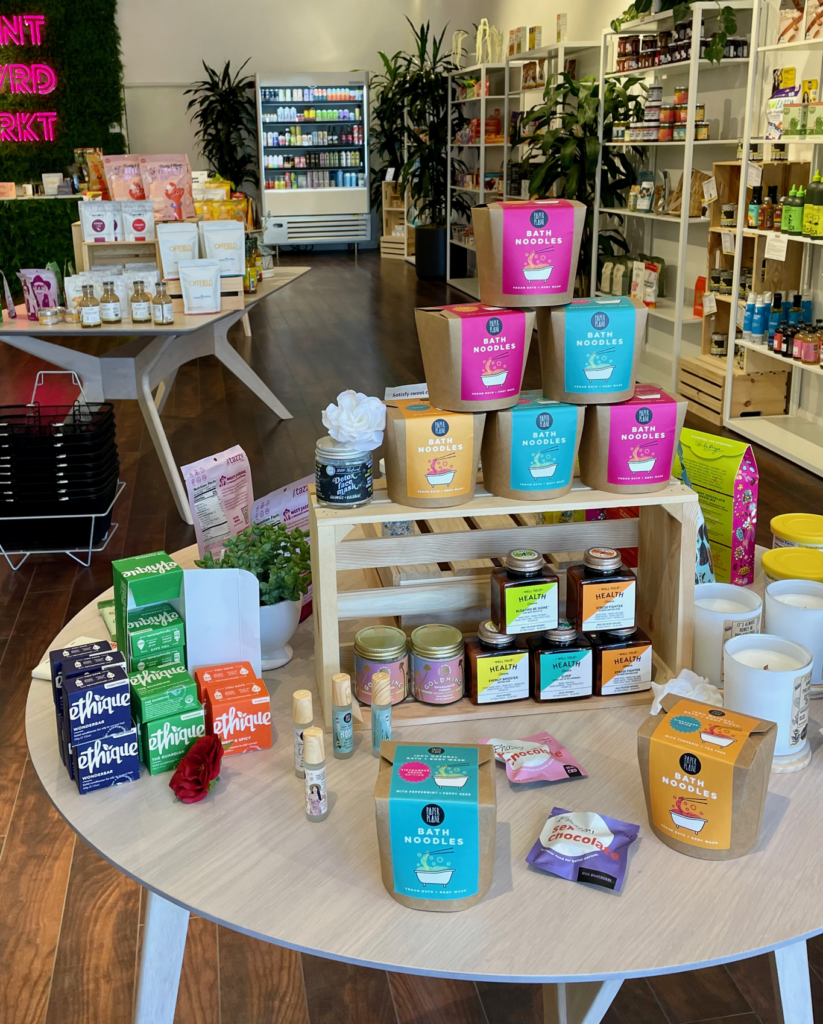 A themed display of vegan bath and body products was arranged on a table at the front of the store. Stephanie Gerson / Daily Nexus

In my conversation with the founders, we discussed the difficulties of operating a market for a specific audience in Montecito during the pandemic. Morton-Smith and Benon signed a one-year lease in 2021 to test the success of the business. Due to unexpected delays with obtaining a health permit and setting up the store, PLNT PWRD MRKT opened a few months behind schedule in December of 2021 and closed June 3 of this year. Morton-Smith and Benon emphasized that the space for the store was intentional; PLNT PWRD MRKT was located adjacent to the Montecito Country Mart, an upscale shopping center with wealthy clientele — the type of place where Prince Harry and Meghan Markle might frequent. The store was just a few feet away from Vons, which the store owners believed to be an advantage.

“We needed to be an extra stop on people’s grocery runs,” Morton-Smith explained. He expected shoppers to visit the storefront for any plant-based products they couldn’t find at Vons.

Despite the favorable location, foot traffic around the store was lower than expected. Combined with expensive Montecito rent and inflation that drove up prices, it was hard to keep the novelty store open for longer than the lease allowed. In this new age still affected by the ongoing pandemic, customers are still more likely to visit a one-stop shop or to order groceries online rather than shop at a store that has such a limited selection. However, Morton-Smith and Benon were still able to recognize the several goals they had achieved while operating this plant-based market. PLNT PWRD MRKT has brought upcoming brands to the store’s shelves and presented plant-based eating in a fun, creative way that accepts all types of customers without an ounce of judgment.