The Daily Nexus
Sign of the Times
Enough Is Enough: Biden’s Unfilled Promises for Gun Control
June 13, 2022 at 6:21 pm by Reese Coblentz 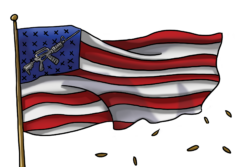 Warning: This article contains mentions of gun violence and includes links to sources that some readers may find distressing.

I am part of a generation of which the threat of gun violence has become the new normal. Schools practice lockdown drills and the nightly news reports on tragedy after tragedy. In high school, I was president of my local March for Our Lives chapter for two years. I advocated for stronger gun ownership laws and safety in schools by organizing walkouts out of school, protests at my local city hall and arranging guest speaker presentations with politicians, such as Adam Schiff and Laura Friedman. Thus, by voicing my concerns alongside my classmates, I aim to contribute to a larger movement. Biden’s insufficient approach to the gun violence epidemic calls for condemnation.

On April 8, 2021, Biden announced new executive actions he intended to implement. Now, just over a year later, it appears that several of the claims Biden declared have gone unaddressed. Biden’s inaction to enforce stricter firearm legislation has spurred the attention and protest of multiple pro-gun control movements and organizations.

Among these organizations are March for Our Lives, Guns Down America and Change the Ref.

These three organizations came together and graded Biden’s assessment of gun violence. They strategically created their rubric based on Biden’s claims from his speech at the White House Rose Garden, as well as his actions taken after a year. Can you guess what their evaluation was? A rather embarrassing D+.

Here’s the breakdown of their grading system, and if you wish to see it more in depth you can access the report card here.

In total, these organizations gave Biden a D+, or 67%. Personally, I agree with this assessment. I feel as though he has only done the bare minimum to combat acts of gun violence through regulation or legislation. On March 25, 2021, Biden stated that gun violence is a less urgent issue and can be addressed with a long-term agenda. Although he was speaking in a time where the coronavirus pandemic was, in fact, the most immediate issue to tend to, acts of gun violence seemingly occur every day.

Shock Market specifically maintains statistics on gun violence that has occurred since Biden was inaugurated. They compile statistics based on the Gun Violence Archive, including data regarding gun deaths, gun injuries, mass shootings, minors killed by guns, minors injured by guns and much more. There have been 887 mass shootings since Biden took office on Jan. 20, 2021.

There are currently headlines reading “Gunman Kills 10 at Buffalo Supermarket Racist Attack” and “Community in Buffalo Grieves After Deadly Supermarket Shooting.” On May 14, 2022, innocent citizens in Buffalo, New York fell victim to yet another mass shooting that the innocent citizens of America are left to endure. An 18 year old, who allegedly suffers from poor mental health, secured an assault-style rifle and murdered ten African American individuals. Not only is this incident classified as a racially motivated hate-crime, but one that was 100% preventable. The shooter had previously shown signs he was not mentally well and evidence suggests he had planned the attack in the prior months. The attack itself was filmed on a live streaming service, which sensationalizes and spreads the in-the-moment traumatic impact.

As an individual who is incredibly passionate about advocating for stricter gun ownership laws and gun control legislation, I can only hope Biden takes these tragedies and follows through with the executive actions he claimed he would take more than a year ago.

If you want to help hold Biden accountable, you may consider donating to organizations like Change the Ref, Guns Down America and March for Our Lives. These organizations promise to push for a safer America and put a stop to the gun violence epidemic. Moreover, national organizations like these have the resources to work directly with Biden and his teams in making change happen.

Reese Coblentz passionately feels that Biden needs to be held accountable for his claims to end gun violence in America. To save ourselves and thousands of others, we must continue this ongoing fight for gun control.

If our politicians defended our own kids like they defend Israel, we wouldn’t have this issue.

Ah, anti-Semite at UCSB, not surprise there.

As a Jewish man from the Soloveitchik rabbinical dynasty – I can tell you he is not being anti-semitic at all really. He just understands who really controls the coffers and policy of your USA. It comes off as brash and severely insensitive for the uninitiated – and to be honest that is the way we want it. If you want to understand why this reversal is so – try to find the book The Protocols of Zion. It will all make sense then. I sincerely doubt you are Jewish, Edmund. And Edmund, are you implying UCSB is rampant with… Read more »

Other than full scale confiscation of guns from all Americans and repealing the second Amendment, I have yet to see any viable solutions that would prevent mass shootings. All this article does is point out a problem and offers no solutions,