The Daily Nexus
The Daily Stench
Report: If One More Man Touches My Waist While Passing Me At A Party, I Am Going To Leap Into The Sun
May 19, 2022 at 4:20 am by Annie Nymous 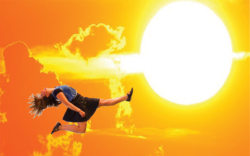 “I’m really going to do it this time,” said second-year Heidi Nuffathis amid the unce-unce-unce of the dayger surrounding her. “I don’t know how much more I can take.”

Nuffathis looked to the sky, letting our reporter know that the sun’s toxic gasses were looking “really sexy right now.”

Nuffathis isn’t the only girl in Isla Vista suddenly feeling her gaze pulled up to the big, hot ball in the sky. The latest data shows that 87% of women in I.V. would rather be fully consumed by a scalding mass of helium, hydrogen and plasma than have one more man touch their waists as they are passed at a crowded party.

“Honestly, I was so high, I thought I was going to float away, and I needed to hang onto something,” said the poor, unfortunate fool who had been clinging onto the waists of women on a flimsy Del Playa deck for dear life. After our interview, the fool – fourth-year student Dev Fyingravity – retreated to the floor, his cheek pressed against the seltzer-stained wood, knees tucked in like a third trimester fetus.

Meanwhile, across the crowd, Nuffathis’ grimy, formerly-white Air Force 1s began to levitate off the ground. Seemingly set off by another waist-grab, Nuffathis was spurred by the supernatural – selected by the gods, perhaps – and floated up and up and up, even higher than poor Dev, headed straight for the sun.

According to Nexustentialism’s interplanetary reporter at the International Space Station, Nuffathis is reportedly enjoying her new life inside the sun, free from men who think they can just touch your waist freely as they pass you.

Annie Nymous is here to say, to every man, don’t fucking do that.

Dont care still gonna do it