The Daily Nexus
News
Deltopia Yields Few Arrests, With at Least One Serious Injury
April 6, 2022 at 12:04 am by Atmika Iyer

The 2022 Deltopia — an annual unsanctioned street festival in Isla Vista held on the first weekend of spring quarter — yielded 34 citations and four arrests from Friday night through Sunday night. 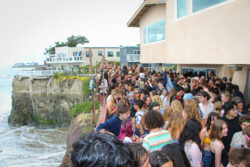 The bulk of the 34 citations were from 14 minor in possession of alcohol citations and 13 open container citations, according to the Santa Barbara County Sheriff’s Office (SBSO)’s Deltopia Weekend Recap.

In total, SBSO filed 16 police reports, distributed 84 parking citations and requested that eight cars be towed during Deltopia, according to the weekend recap.

This year’s Deltopia attendance was “significantly higher than the past two years during the Covid-19 pandemic,” SBSO noted. However, the number of arrests and citations was downscaled from previous pre-pandemic Deltopias, with the 2019 Deltopia yielding 94 citations and 38 arrests, the Nexus reported in 2019.

SBSO reported that a “majority of attendees were concentrated at residences along the ocean side of Del Playa,” an I.V. street, and noted “an increase in emergency medical calls, the majority of which were for acute alcohol intoxication, that resulted in the shift of medical response to a triage system in the Isla Vista area.”

““Deltopia” has been routinely declared an MCI prior to the event taking place since 2014, except for 2020 & 2021,” a press release from the Santa Barbara County Public Health Department stated. “Planning for these types of large events as MCIs allows for the EMS System and providers to appropriately safely care for and manage the expected large number of patients. This type of planning allows for a focused response to the declared incident while ensuring service delivery is uninterrupted to the surrounding communities.”

SBSO added that medical calls significantly decreased in frequency after 6 p.m. — at which time the noise ordinance came into effect — and that a majority of Isla Vistans complied with the ordinance.

There was at least one significant injury, in which a young local female fell from a significant height at a party on 6587 Del Playa and sustained life-threatening injuries, according to Santa Barbara County Fire Department Public Information Officer Mike Eliason.

According to Isla Vista Community Services District (IVCSD) Board President and Director Spencer Brandt, this year’s Deltopia was significantly safer in comparison to past full-scale Deltopias.

“I’ve been present in the community for the Deltopia since 2016. And I can tell you that it’s changed a lot over the years. I think that the vibe and the atmosphere of the event has definitely gotten safer. As I was walking around on Del Playa, one thing that I noticed is there seemed to be less parties happening than there have in the past,” Brandt said. “I see huge progress in making this event safer and more local over that seven-year period of time.”

Brandt added that a downside and safety concern of having fewer parties is overcrowding.

“It does lead to overcapacity at the parties that do exist, especially when those parties are happening on Oceanside Del Playa or on second stories where there are balconies,” Brandt said. “The overcrowding of those small spaces can be very, very unsafe. What we saw was that law enforcement did have to intervene in a number of instances, because balconies and the structural integrity of these buildings looked as if they may be putting people in danger.”

Brandt, who worked with his colleagues at the IVCSD to create a Spring Festival, said that creating alternative events for students to participate in during Deltopia helped to successfully decrease crowd sizes on the street.

IVCSD Director Ethan Bertrand echoed Brandt’s concern regarding overcrowding and added that landlords should do more to enforce smaller crowds at Deltopia parties.

“We must hold property owners accountable for these issues. It is frustrating to see some of the same properties on the ocean-side of Del Playa being at the center of safety issues year after year,” Bertrand said in a statement to the Nexus. “The property owners need to be a part of the solution by encouraging safer celebrations at their properties. Some property owners have been out to lunch, frankly.”

During Deltopia weekend, national news outlets like TMZ covered this year’s street festival, reporting that, “UC Santa Barbara was out of control Saturday, after a rager left a bunch of people injured and hospitalized.”

While the TMZ article noted that “authorities anticipated problems and imposed various restrictions, including noise limits,” it did not acknowledge that there was only one violation of the noise ordinance and that the 2022 Deltopia yielded far fewer arrests and citations in comparison to previous years, something Brandt deemed unfortunate.

“I think that, unfortunately, Isla Vista is really no stranger to giant media corporations trying to turn Deltopia into something that it’s not really. What they are doing amounts to misinformation, and that’s really harmful,” Brandt said. “The vast majority of Isla Vista residents enjoyed this weekend safely and complied with a special festival ordinance without exception.”

Bertrand also said that national media coverage blew the events of Deltopia weekend out of proportion.

“Many news outlets report on Deltopia as if we are still in 2014,” Bertrand said in a statement to the Nexus, referencing the 2014 Deltopia Riot. “It’s important to acknowledge the 40% reduction in crowd size that has occurred since 2014 (at least 10,000 less people), a steady and significant drop in the number of arrests and citations related to the event, or the many ways that community members have shown up to help their neighbors.”

UPDATE [04/06/2022, 12:10 p.m.]: This article has been updated to include information from the Santa Barbara County Public Health Department.

Many parties were violating the Festival Ordinance. But law enforcement has taken the approach of giving warnings. If a zero tolerance approach had been taken, many more citations would have been issued.

Instead of blaming landlords, how about demanding accountability from tenants who organize ragers and advertise them on social media? Not just on Deltopia, but year-round. All of them are breaking their leases, without exception. No one is forcing them to do so. Mr. Bertrand speaks as if party organizers are innocent bystanders.

If you are renting a space as your home on a yearly basis, any “anti-party” clause would not be valid in court. There is federal legal precedent on this, as well as anti-subleasing clauses. You can put whatever you want in your lease, but that doesn’t mean it’s enforceable.

It is your home while you are renting, and your landlord does not have jurisprudence over who you allow inside of it.

Landlords can absolutely file a lawsuit to evict tenants for breech of contract. Then they can sue the evicted tenants for the rent they lost when finding another set of tenants. And the tenants will have an eviction on their record.
Funny thing is, the poor little students will sue a landlord for a balcony collapse after loading it with a hundred people. How about Man up and take the fault. When the whole lot of them fall into the ocean, the landlord should sue whoever had the party – if they are not dead.

landlords should rent all their properties through airbnb which has a global party ban. LOL

I’m shocked, shocked to find that raging parties of 20-somethings are transpiring on a beautiful weekend near the beach.

Round up the usual suspects!