The Daily Nexus
News
IVCSD Presents Alternative Deltopia for the First Time
December 2, 2021 at 1:00 am by Asumi Shuda

Isla Vista Community Services District presented an alternative event to the annual Deltopia during their board meeting on Nov. 30 — an event set to take place on April 2, 2022. 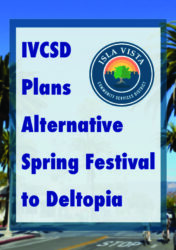 After hearing public input on Deltopia — an annual, unsanctioned party on the streets of Isla Vista during the first week of spring quarter — Isla Vista Community Services District (IVCSD) began planning for an alternative event in partnership with Lucidity, but the event was canceled in both March 2020 and 2021 due to the spread of COVID-19.

“Since we’ve been formed as a district, we’ve had the call of a safer and fun community events and festivals that makes large weekends safer and healthier for the community,” IVCSD General Manager Jonathan Abboud said during the meeting.

Now, with spring quarter fast approaching, IVCSD reconvened its Spring Festival Ad Hoc Committee this year to plan for this alternative event in 2022.

“We’ve done recent efforts [to promote safe and fun community events], but we’ve still been building towards our full plan [of the alternative Deltopia],” Abboud said.

Abboud presented the following objectives in this event proposal: providing safe and fun options for entertainment, promoting community building for I.V. — specifically in the sector of arts and culture, celebrating the “positive aspects of the Isla Vista community,” supporting local businesses, allowing the college town to “create their own narrative” and emphasizing the locality of the event.

To uphold their emphasis on “keeping things local,” IVCSD is planning to organize musical performances with local bands within Isla Vista.

Other objectives presented at the meeting include creating site plans within public spaces to host a variety of events and experiences during the festival. There will also be an emphasis on providing alternative means of public health and safety measures in contrast to traditional law enforcement.

“For example, in the past, we’ve talked about having a medical tent brought in that could do first aid and other immediate issues that can be taken care of instead of having someone transported out,” Abboud said.

IVCSD listed potential sources of additional funding, including the UCSB’s Associated Students, other public agencies with aligned goals, private advertisement and/or sponsorships and the COVID-19 emergency funds reimbursement from the state of California to IVCSD.

“The committee discussed the budget to be $120,000 to $150,000 in total, including all these partnerships and funding sources,” Abboud said.

Asumi Shuda
Asumi Shuda (she/they) is an assistant news editor for the Daily Nexus. She can be reached at asumishuda@dailynexus.com or news@dailynexus.com.
1 Comment
Inline Feedbacks
View all comments

This started as “floatopia”–a disgusting beach party that evolved into “deltopia” when the police shut off beach access. Whey have this party at all? What a waste of money. This idiotic, dangerous, and incredibly expensive non-event needs to go the way of the dodo–same as Halloween. There’s a party every weekend in IV. Why advertise a “special spring party” that will bring hordes of outsiders in to tear the town apart. The idea of erecting a medical tent is manifestly stupid. You are paying a lawyer $2K a meeting for legal guidance. Does the word “liability” mean anything to you… Read more »