The University of California Board of Regents met in person at UC San Francisco Mission Bay from March 15-17 to discuss the possibility of a new student regent, cybersecurity and COVID-19, among other topics. 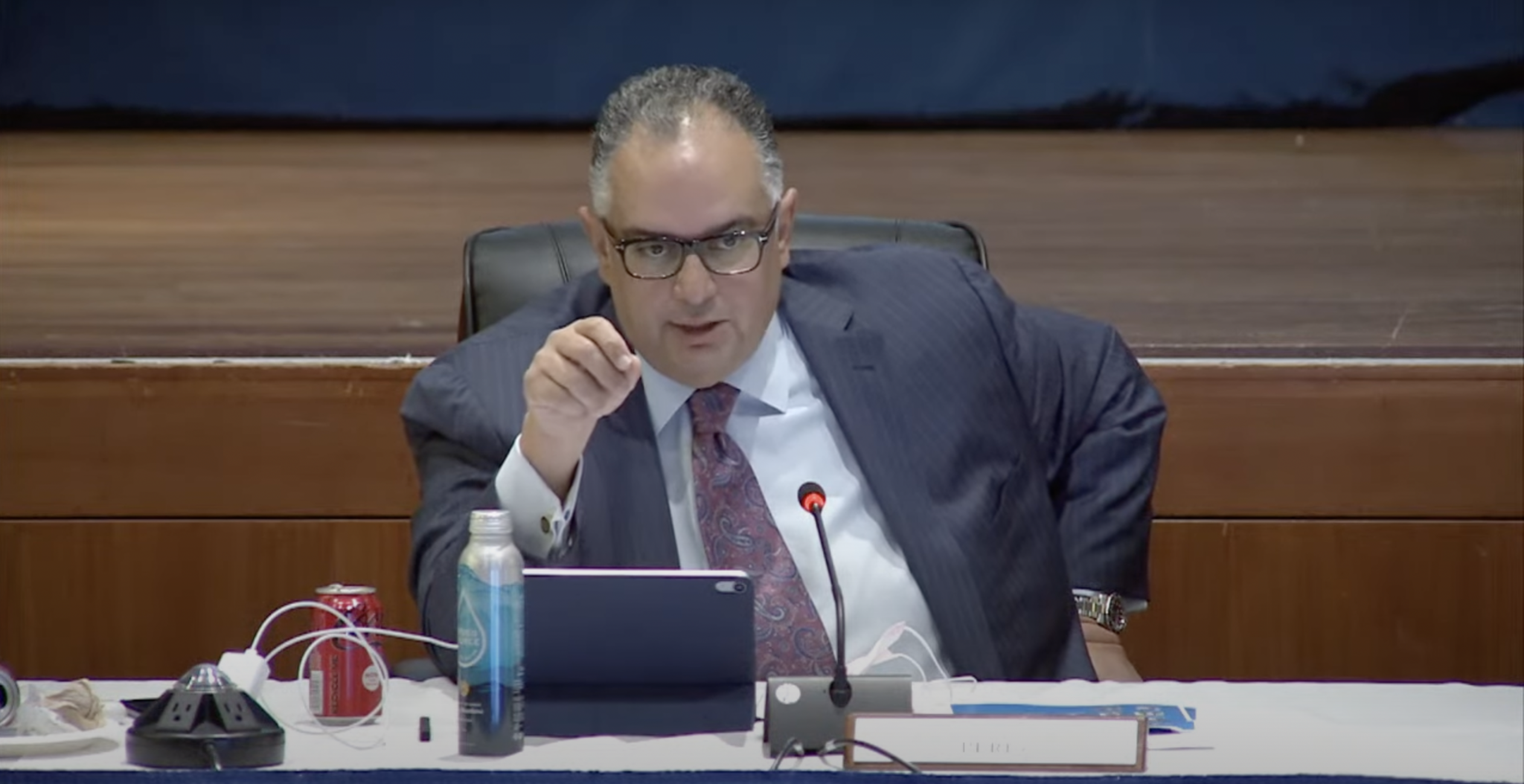 UC Regent John Pérez brought up the 2021 Accellion data hack — in which UC community members’ personal information were leaked — during the committee meeting. Courtesy of the UC Regents

The meeting marked the first full in-person convening of the Regents since the onset of the COVID-19 pandemic. The Regents last met in January via Zoom, when they allocated pay raises for all UC Chancellors.

The Nexus compiled moments relevant to the UC Santa Barbara student community from the Regents’ March meeting below.

The regents discussed doubling student representation within the UC Board of Regents by appointing two, rather than one, student regents with voting power.

Regent Jose Hernandez spoke during the Public Engagement and Development Committee in favor of the amendment, acknowledging the difficulty in preparing two student regents for the role but also the necessity of such representation.

“We shouldn’t be afraid of having more students present because, let’s face it, they’re our major stakeholders,” Hernandez said.

Student Regent Alexis Atsilvsgi Zaragoza, currently the sole student regent with voting power, spoke to the dual value and difficulty of the role.

“It is very difficult to hit the ground running and really accomplish a lot in the two years, [but] the wealth of our personal knowledge of being on the campuses and being able to relay that off to you all, I think, is one of the most effective things that we do here,” Zaragoza said.

Regarding the formation of the second student regent position, Zaragoza said discussion around how to best handle the position is ongoing, and ideas such as implementing a mentorship program for the student regents have been presented, with a “senior-level” regent acting as a mentor.

Student Regent-designate Marlenee Blas Pedral — a non-voting student regent who will gain voting power during the next academic year — echoed Zaragoza’s statements and emphasized the need for the added position.

“My hope is that we embrace the support of our legislators and wait for California voters to voice their decision if and when it comes up for our election,” Blas Pedral said.

Whalen criticized the lack of professional peer review and student involvement in the project’s design, the “tremendous costs and the questionable design” — referencing the lack of windows and proper ventilation in the development’s layout — inaccessible location and inadequate solution it presents to the ongoing housing crisis at UCSB.

“The project site requires the relocation of the entire facilities management operation, almost a mile off the main campus at a location that is only accessible by motor vehicle,” Whalen said. “This site is in a remote corner of the campus without either walkways or bike paths. These connections are awkwardly proposed in locations that will cause circulation conflicts, rather than solve them.”

UC Student Association President and UC Santa Barbara External Vice President of Statewide Affairs Esme Quintero-Cubillan spoke during the Academic and Student Affairs Committee, advocating on behalf of marginalized students and calling for more representation on the Board of Regents.

Quintero-Cubillan also called for better accommodations from the UC for students with disabilities.

“The barriers to diagnosis, the physical obstacles and the attitudes that see disabled students solely as inspirational, as savants and lucky to be in this institution, perpetuate cycles of harm and isolation for us as disabled students,” they said.

“As a neurodivergent student, we need to encourage the university, but especially our faculty, to extend as many accommodations as possible,” they continued.

Quintero-Cubillan also addressed the enrollment freeze that UC Berkeley was recently put under and noted its impact on prospective low-income students across all UCs.

They closed their statement by noting the vacancies on the Board of Regents and the opportunity for increased representation that it provides.

“We need more Latino representation, especially with several schools holding HSI designations … We need more regents from low income communities who can attest to what it means to be a Pell recipient,” Quintero-Cubillan said.

“We also need more regents of Black and Indigenous lived experiences that can speak to some of our most marginalized populations — especially in the wake of several anti-Black incidents on our campuses, namely UC Riverside and UC Irvine — as well as the future of [the] UC as it seeks to reconcile its colonial history and its colonial present,” they continued.

During the Compliance and Audit Committee, UC Systemwide Cybersecurity Audit Director Greg Loge presented the results of the first audit conducted following the implementation of the UC’s Electronic Information Security Policy (IS-3) in 2019, put in place to bolster UC cybersecurity.

UC Regent John Pérez, who serves on the Compliance and Audit Committee, brought up the 2021 Accellion data hack — in which UC community members’ personal information like social security numbers and addresses were leaked — during the committee meeting.

“The Experian package that I, as well as so many people, took advantage of after the last major cyber breaches is about to expire. So we’re a year post our implementation of the protection we gave to folks in the campus community for a major breach,” Perez said.

“I don’t feel satisfied that the implementation is at a pace that’s appropriate given the severity of the breaches that we had … I just want to add my voice as one calling for urgency and due speed,” he continued.

The Regents concluded the meeting by approving the 2022 external audit plan for the UC.

On March 17, the last day of the Regent meetings, UC Health Executive Vice President Carrie Byington gave an update on the progression of COVID-19 at UC campuses and globally.

Currently, UC campuses with attached hospital services have been provided grants to continue research on the virus, including COVID-19 forecasting models and with disadvantaged communities, Byington told the Regents.

Byington said that COVID-19 has grown less lethal throughout the course of the pandemic and infection rates are currently declining. Currently, California infection rates have declined 86% in the last month, she said. Additionally, 99% of the country is in the green or “low” gradient for COVID-19 transmission, including all UC-adjacent counties.

“The trend is in the right direction and that gives us hope. We know so much more today than we did two years ago,” she said.

However, Byington presented two “troubling” COVID-19 studies from the United Kingdom, one of which showed how COVID-19 caused changes to brain matter and another that showed a rise in severe illness in those with COVID-19. She also warned of a sixth wave of COVID-19 in the U.K. that could reach the U.S. in the near future.

Byington said that vaccination rates across the U.S. have stagnated.

“We have been stuck in the mid-60s for months with no real improvement in the vaccination rate,” she said.

While mask mandates across the UC have been lifted, Bryon recommended that sick, immunocompromised or otherwise impacted individuals wear a mask and check in with their health care providers if they had any concerns.

She ended the meeting by informing the Regents that the UC System-Wide Committee for Campus Return will be adjourned until July 2022, when they will meet again to re-assess the situation.

“I think this is a victory, and something that shows the capacity of all of our campuses,” she said.