The Daily Nexus
News
“Munger Hall Has Got To Go:” Students Protest Munger Hall and Eviction of Students Living in Hotels
November 5, 2021 at 4:45 pm by Atmika Iyer and Asumi Shuda

Hundreds of students, faculty and other UC Santa Barbara community members gathered outside the university’s library on Nov. 5 to protest Munger Hall — a dormitory proposal funded by billionaire and Berkshire Hathaway Vice Chair Charles Munger.  The building design, which has a planned completion date of fall 2025, has received resounding criticism due to the proposal’s lack of windows and fresh air. 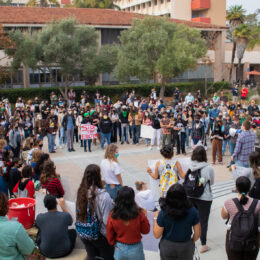 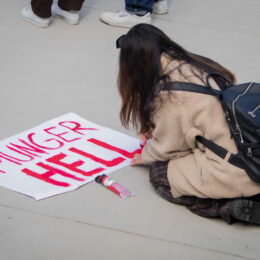 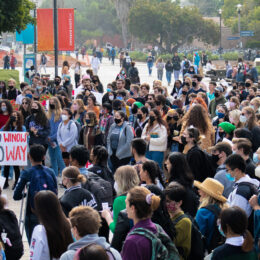 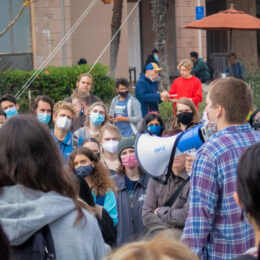 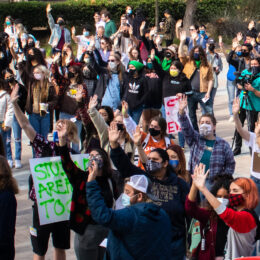 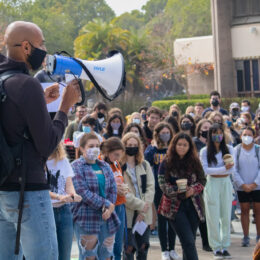 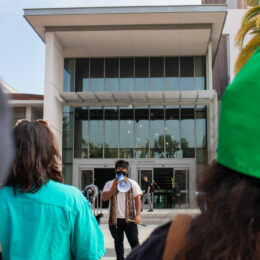 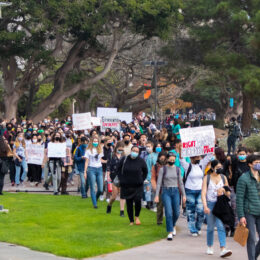 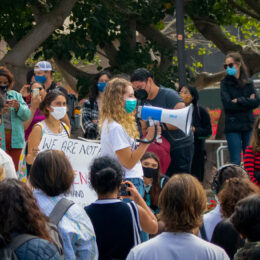 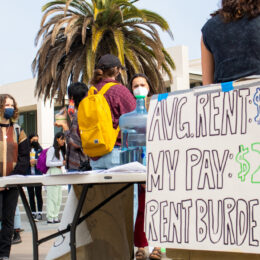 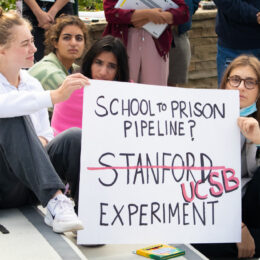 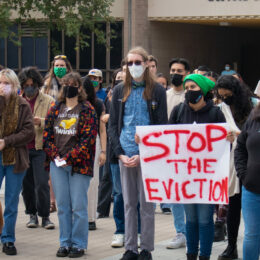 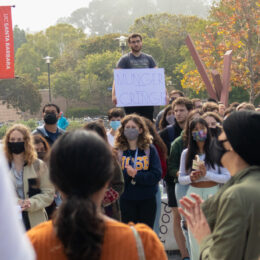 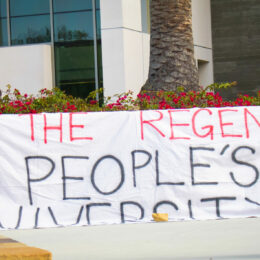 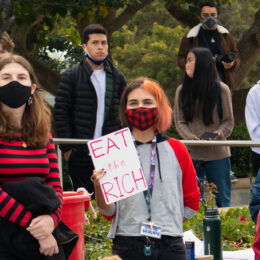 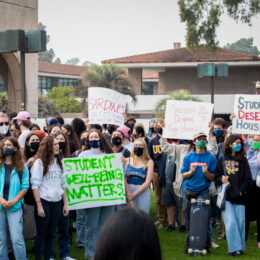 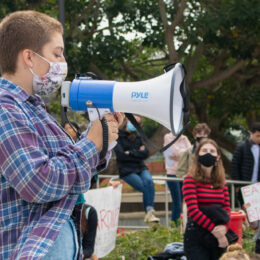 As many parents walked on campus for Parents’ Weekend, they witnessed hundreds of students with signs, chanting and marching around campus saying, “Don’t send your kids here.”

Attendees also protested the upcoming December eviction of students currently living in hotels due to the housing crisis.

Community organizations Food Not Bombs and UCSB Cost of Living Adjustment arranged the event and organized speakers and food for the rally.

UCSB students and faculty have grappled with a severe housing crisis since last summer; Munger Hall is the university’s proposed solution.

According to the Santa Barbara County Board of Supervisors, Sustainable University Now and many student organizations, the university is to blame for the ongoing housing crisis because it violated the Long Range Development Plan (LRDP). LRDP is a contract stating that the university must cap enrollment at 25,000 until 2025, build more dormitories for the additional 5,000 students the UC mandated every campus to enroll and build 1,800 new units for its faculty and staff.

“UCSB is out of compliance [with] the terms of the Long Range Development Plan based on their self-reported enrollment numbers and has not built required housing to keep up with their pace of enrollment,” Gina Fischer, representative for Third District Supervisor Joan Hartmann, said.

The university, however, maintains it is compliance with the contract.

The event began with Spencer, an Indigenous student, speaking to the crowd and singing two songs, the first of which was written by his cousin and the second being a sacred song of the Chumash people.

“A lot of our ancestors would sing [this song] before movements, revolts [and] ceremonies to get the momentum [going],” Spencer said.

From there, several organizers and students who experienced the housing crisis first-hand spoke to the crowd.

Sixth-year global studies Ph.D. candidate and graduate student Pratik Raghu asked attendees to understand that the university views them as a commodity, and ultimately does not care about their well being.

“For those of you who might be new to UCSB, I would just like to take this chance to disabuse you of whatever illusions you might have about this place,” Raghu said. “”You attend an institution that ultimately does not give a fuck about you. Recognize that at best, you are a commodity to be bought and sold to the university.”

However, Raghu reminded students that ultimately, they are the ones that hold the power.

“We’re here today because the university insists on forgetting who runs this place, who makes this place run,” Raghu said. “We need to remind them who’s university this truly is.”

Third-year and Food Not Bombs volunteer Izzy Bahamonde-Partlan agreed with Raghu’s sentiment. The primary motivation behind UCSB’s support for Munger’s design of the building, they said, is not the students, but money.

“[UCSB] doesn’t care about all the people who are struggling as a result of their greed,” Bahamonde-Partlan said. “They only care that building less housing while simultaneously getting more students than they could possibly support makes them more money.”

“The crowding in Isla Vista and in our community at large is a direct result of UCSB’s greed and disregard for our community,” they continued.

Food Not Bombs has been distributing food and water to students living in university-subsidized hotels as a result of the housing crisis, and Bahamonde-Partlan said that many students living at hotels have a difficult time accessing drinkable water and affordable food.

“We, at Food Not Bombs, have heard multiple reports from multiple hotels that the water is cloudy, it smells like sulfur, it tastes like chemicals and dirt,” Bahamonde-Partlan said. “It’s yellow in color and no amount of filtering will fix it. To top it off, we found out recently that some of the hotels actually sell bottled water in the lobbies.”

Bahamonde-Partlan shared their own experiences in dealing with the housing crisis this year.

Following these students’ speeches, protesters marched from the library to the grass area behind Storke Tower. Many chanted along the way: “Hey hey, ho ho, Munger Hall has got to go.”

At Storke Tower, more speakers advocated against Munger Hall, and on behalf of students facing eviction from hotels. Harold Marcuse, a professor in the history department, spoke to the crowd and advised students to be aware that the UC Regents, California Legislature and state government are more to blame than Chancellor Henry T. Yang.

“I’ve seen [Yang] go from being a super guy to somebody who basically has to grovel at the feet of philanthropists like [Munger] because he needs to backfill the funding that isn’t coming from the state,” Marcuse said.

“We have to start making it fair and democratic,” Marcuse said. “We have to end gerrymandering and corporate contributions and elected and selected leaders being in the pocket of so-called ‘philanthropists’ like Charlie Munger who shove this thing down our throats without any feedback from any of us.”

After a slew of speakers, the students marched on the path by the University Center with several chants, including, “Fuck Charles Munger,” “Don’t send your kids here,” and “Charles Munger, fuck yourself.”

The protest concluded with a call for action from various speakers, asking students to call and email UCSB administration and voice their opposition to Munger Hall and the eviction of students living in hotel housing.

Professor Marcuse is a member of the Academic Senate. That entity enjoys something called “shared governance” here at UCSB. Time to consult with your fellow senators and take a unified position on Henry Yang and Charlie Munger–if that is even possible.

I know, let’s all drop out in protest, or transfer to somewhere that’s not the nations #1 party school.

They’re complaining about the local water supply now, as if UCSB had anything to do with it. Lunacy. Universities are not meant to be caring, safe spaces. That’s the role of families. Don’t like UCSB? Go study at another university that holds your hand like your parents never did, and help the housing market in the process. Problem solved.

People should do a study on the water chemicals use. Next protest should be at the Goleta Water Department. They sell their souls to money as well not caring about the health or well being or their “customers.” John McGinnis and the board should be forced to resign after digging deeper into their manipulations in the water system