The Daily Nexus
News
Munger Responds to Architecture Criticism, UCSB Stands By Design
November 4, 2021 at 11:00 am by Atmika Iyer and Asumi Shuda

The resignation of architectural consultant Dennis McFadden resulted in nationwide attention on the construction of Munger Hall — a planned 11-story dorm building that is poised to host 4,500 students and open by Fall Quarter 2025. 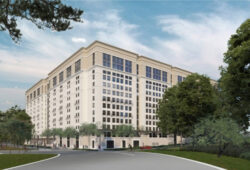 The building — funded by billionaire and Berkshire Hathaway Vice Chairman Charles Munger — is part of the university’s goal to address the housing crisis in UCSB and Isla Vista. Santa Barbara County and community coalition Sustainable University Now have accused the university of violating the Long Range Development Plan — a contract stating that the university must cap enrollment at 25,000 students until 2025 and build additional housing — and contributing to the housing crisis.

The building has become the center of controversy due to its unique design. In his resignation, McFadden specifically cited the following issues with the architecture of Munger Hall: the complete lack of access to the outside from inside the building, the eight-person living units being completely “sealed environments with no exterior windows” and the complete dependence on artificial lighting and mechanical ventilation.

In addition to local papers like the Nexus, the Santa Barbara Independent and Noozhawk, nationwide news outlets like the LA Times, The Washington Post, The New York Times and many other papers began covering the construction of the building following McFadden’s resignation.

Munger responded to the criticism of the new dormitory in an interview with Marketwatch.

“I think the building will be a huge success,” Munger told MarketWatch. “If this building fails, it will be the first Munger building that fails.”

Munger added that he isn’t surprised with the criticism given his wealth.

“You’ve got to get used to the fact that billionaires aren’t the most popular people in our society,” he told MarketWatch. “I’d rather be a billionaire and not be loved by everybody than not have any money.”

In response to the interior design of Munger Hall heavily relying on artificial lighting, Mark Baker, University of California alumni and founder and president of Soft Lights Foundation — an advocacy group working to raise awareness of the negative consequences to LED lights — sent an email to UC General Counsel Charles Robinson to voice opposition toward this design.

“I was horrified to learn that UCSB is moving ahead with construction of windowless rooms with spatially heterogeneous visual radiation from Light Emitting Diodes,” Baker said in the statement to the Nexus.

In the email, Baker attached a list of conditions that cause photophobia — which means fear of light — from light sources, asserting that the use of LEDs will put individuals with such conditions under increased harm. These conditions include albinism, anxiety, autism spectrum disorders, depression, dry eye, glaucoma and more.

“Punishing UCSB students by enclosing them in windowless rooms with toxic spatially heterogeneous visible radiation is legally, ethically and morally unacceptable,” Baker said in the statement.

UCSB spokesperson Andrea Estrada addressed some of the criticisms of the building, including the lack of natural light since 94% of student rooms will not be equipped with windows.

“All of the common areas and amenities, including the Great Rooms and Kitchens within each House, have significant access to natural light,” Estrada said in a statement to the Nexus.

“Every room that does not have an operable window (and even all bedrooms that do) is provided with continuous fresh air supply at approximately twice the rate of building and mechanical code minimums. One could argue that this may be an improvement in air quality as it does not require a student to open the window for fresh air.”

Estrada added that the virtual windows will have “a programmed circadian rhythm control system to substantially reflect the lighting levels and color temperature of natural daylight.”

Estrada also said that the goal of Munger’s architecture is to “emphasize the collaborative and social interaction between students and de-emphasize the use of student bedrooms.”

“In order to achieve these goals, the bedrooms are made as efficient as possible and the shared spaces are significantly enhanced,” Estrada said.

“Each house provides a Convivial Kitchen with multiple cooktops, wall ovens and microwaves to encourage social interaction among students through cooking together with housemates,” Estrada said.

Despite the stated amenities, the lack of natural light and manufactured air remains a concern for many of its critics, so much so that the LA Times wrote that Munger is “leveraging other money — probably most of it from taxpayers — to test his crackpot theory that students can happily live in windowless cubicles despite substantial evidence that natural light is tied to better mental health, sleep and performance.”

The Nexus will continue reporting on Munger Hall developments.

Can you hear the wind, bird calls of the season or the waves from those windowless rooms. If munger wants to build a colossus of a building to increase housing options, build it off campus and let the free market determine if it’s a good design. This way the university won’t be in the hook to demolish and rebuild the failed experiment.

Good point but no sane community would allow a monstrosity like that–certainly not Santa Barbara County–hence it can only happen on the campus. The location may be an effort by munger/yang to get it outside the coastal zone.

Even with open windows you wouldnt smell the ocean or hear the waves from the location of the building. From its location you will hear more airplanes than birds. They can build it on campus and then let the free market decide. if you dont like it dont go here or live off campus.

I would like to hear from the Santa Monica architect, VTBS, responsible for implementing the design. Do they agree with the design or is this merely a profitable business decision to draft a client’s vision? Also, 1/3 of people in the world are introverts. They like to retreat, recharge, maybe read a book in solitude in their bedrooms. No windows, natural light, or fresh air for them? Lastly, what if a student needs to quarantine for a week? The cell, I mean dorm room, would be challenging.

Nothing is going to stop Yang at this point. He’ll never retire, never stand up against Munger or science/engineering faculty, etc to the demise of staff, students, and faculty. YANG NEEDS TO GTFO.

Last edited 1 year ago by Gaucho

Yang and Munger proposed this years ago. Yang manages to continue regardless of bad publicity. Let’s face it nobody in their right mind would hire those two to run a daycare let alone a university.

In the world of Charlie Munger, it sounds like nothing matters, and what if it did!

“I’d rather be a billionaire and not be loved by everybody than not have any money.”

Well congratulations, you clown, you got what you wanted. Now if you’re so insistent on building your vanity project, shell out the full cost rather than just making a down payment and leaving UCSB to foot the bill for the billions it’ll cost to build it.