The Daily Nexus
Nexustentialism
It's satire, stupid.
Shocking Revelation: It’s a NASAL Swab???
February 24, 2022 at 4:20 am by Migraine Mommy 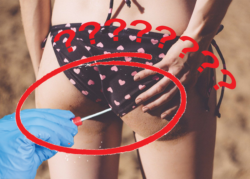 This past week, a group of students bravely came forward to Nexustentialism with a self-proclaimed revelation: COVID-19 swab tests are actually for your nose.

However, when confronted with this “revelation,” our team was left dumbfounded.

“What did you think they were for?” asked Assistant Editor Sierra Vakili with an air of bewilderment. Her question was met with a dread-filled silence until the ringleader of the group, fourth-year Harry Pitman, was brave enough to speak out, shouting, “We thought they were for your ass!”

Pandemonium quickly ensued in the Stench office, with people shouting, crying, screaming and throwing up. When it was finally subdued, the office looked like a biblical catastrophe had occurred. Trash cans were on fire, and everyone was missing their left sock. In the silent aftermath, Nexustentialism Editor J. Matteo Wharton was able to ask the question we were all thinking: “How did this even happen?”

Every person in the office scratched their head and got to thinking, until one of the writers decided to put it up on the board, spelling out the key issue in block letters: Nasal. How could they have mixed up “nasal” and decided to put the swab up their butts? Everyone pondered quietly, and we heard someone solemnly whisper, “God, I feel bad for Loma Pelona.”

All was quiet until Stench writer Kathleen Santacruz offered, “Hey, it’s five letters! What if this is like Wordle?” to which everyone replied, “Shut the fuck up.” But after a second, they realized that she might have a point. We all got to work on the letters on the whiteboard and began to rearrange them: nasal, lanas, anals.

From that day forward, Harry Pitman swore to never smoke before swabbing and made sure that this mistake was never repeated again. However, it is unsure if Loma Pelona will ever forgive him …

Migraine Mommy will forever trust in the power of Wordle.