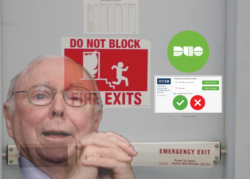 UCSB has announced that they will be expanding the use of Duo multi-factor authentication in order to make the fire escapes at Munger Hall as harmless and fun as possible. While the original plan contained no emergency exits of any kind, school officials were informed that this design was not up to code, leading Munger to design an innovative, new fire escape system that requires students to use a keypad on the fire escape door to type their UCSB NetID, perm number and password. They will then be emailed a 20-character-long sequence of numbers, letters and various symbols that must be typed into the keypad in order to access the escape route. The door also slams shut after each student walks through it, forcing the next person to restart the same process. This revolutionary system, along with the “I Can’t Believe They’re Not Windows!” digital view simulator, is sure to keep students as safe as possible.

“Hello! I am Charles Munger, the creator of Munger Hall!” said Charles Munger, the creator of Munger Hall. “There is nothing to worry about! Everything is safe at Munger Hall! I am trustworthy! The building is happy and fun and safe! You can trust me! Nothing bad is going to occur there!” Munger then smiled, gave the crowd a double thumbs up for several minutes without blinking and began convulsing. His body suddenly jerked upward toward the sun, opening up its flesh and bearing forth a creature made of tangled wire. “I am pale death, come to bear you to perdition,” said the being, looming over us and laughing, its voice seeming to echo throughout the sky and into our souls as it reached out toward us. It didn’t grab me, though, because I left. I had to get to class.

Spaghetti Williams is still trapped in a time portal and would really, really like someone to help him out.