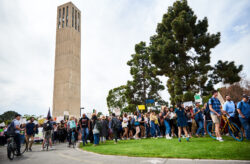 Just before the pandemic began in 2020, graduate students at UCSB and around the UC system were protesting the University for a Cost Of Living Adjustment (C.O.L.A.), a salary increase that would compensate students for skyrocketing housing costs. The pandemic soon dominated the news cycle and disrupted the students’ struggle for fair wages.

The University of California would never, ever leave its students behind or ignore their plight. The UC immediately responded to student demands by providing them with the generous offer of financial planning classes, including practical topics such as ‘how to find a second job’ and ‘how to fit another roommate into your triple.’

However, the University never responded to the students’ primary concerns. Finally, this week, after two long years of protest, the University has finally accepted the demands of its graduate students! In a meeting last week, the Regents of the University of California approved a cost of living adjustment for its employees, so that they could afford the local housing that they deserved.

The Chair gave a prepared statement during the meeting, which read:

“The protests and voices of the employees of the University of California speak to the great adversity and duress they have endured. The pandemic has only

exacerbated the deep crisis this university has faced in housing and meeting the basic needs of its employees. It is our moral prerogative to ensure that our employees are paid a living wage which is appropriate to the area that they serve. Ultimately, this is an issue of pay equity. We have an obligation to pay our employees well. For that reason, each chancellor of the UC system will be receiving a wage increase up to 28.4%, establishing a generous, living minimum wage of $552,000 per year. We hope that this resolution demonstrates UC’s unwavering care and dedication to its employees’ well being.

Chancellor Yang, who received the highest raise of all, was thrilled by the news.

“I’m so glad that we worked so hard to make our voices heard at the highest levels of the system,” he announced proudly. “This victory just goes to show that the little guy has a chance, and that with enough organization and the courage to speak truth to power, you can do anything!”

Varun Iyer needs a byline, and a raise.