The Daily Nexus
News
Uncertainty and Stress Is the Norm for Hundreds of Students Living in Hotels
December 3, 2021 at 10:00 am by Mark Alfred, Yiu-On Li, Kyra Schimpf and Melea Maglalang 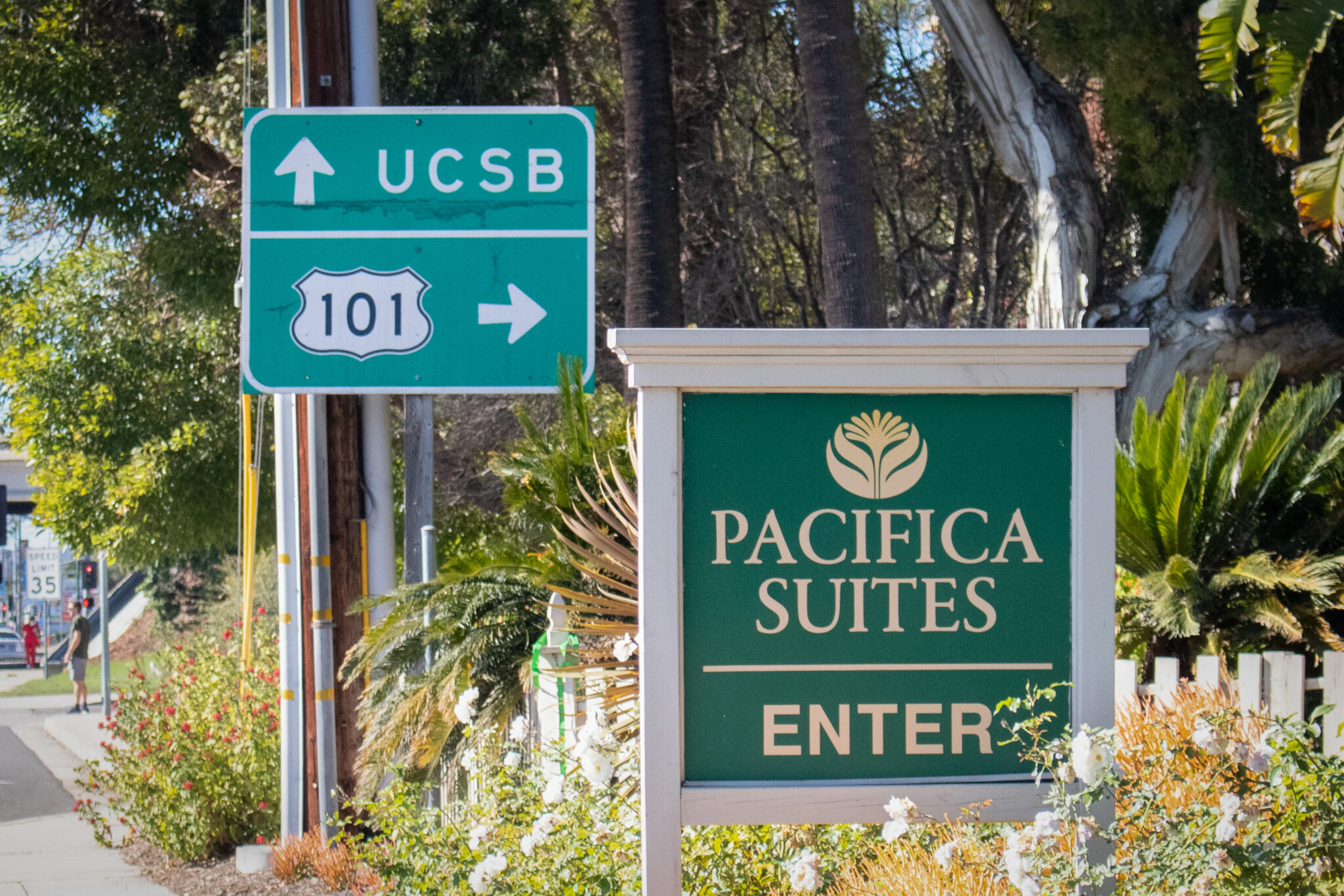 The Isla Vista chapter of Food Not Bombs has delivered fresh food to students living in hotels that might otherwise not have easy access to it. Mark Alfred/Daily Nexus

Fifth-year anthropology major Sarah Hamidi lives in the Ramada by Wyndham, one of several hotels that is providing housing this fall for students impacted by the UC Santa Barbara housing crisis.

She described the stress of not knowing where she was going to live in the months leading up to fall quarter.

“I’m freaking out. I’m ready to cry because I’m not sure that I’ll be able to get housing,” she said. “Then, it’s not until a few weeks before the first day of school that I get an email saying they can offer temporary housing in hotels. I get a sigh of relief, but I feel humiliated, embarrassed and ashamed of myself that I can’t find housing.”

Hamidi’s hotel lacks basic amenities, with no kitchen, freezer or clean drinking water, which has been described as off-color and bad tasting, according to multiple students.

The University did not respond to a request for comment regarding the hotel’s living conditions.

“I just have a microwave and a mini fridge,” Hamidi said. “So, I had to go buy an Instant Pot and I’m lucky that there are groceries stores around the area, but I know students who have to Doordash or UberEats to get food and as you know, can come out as very expensive. I do have to buy my own water, otherwise I just drink water from the sink in my hotel room.”

The Isla Vista chapter of Food Not Bombs has delivered fresh food to students living in hotels that might otherwise not have easy access to it.

“In basically every hotel except for the Marriott, people have had very limited access to fresh food,” said fourth-year mathematics major and Food Not Bombs volunteer Philip Axelrod.

“You know, lots of people are subsisting off of ramen and granola bars. Because without a kitchen, it’s very expensive to get access to fresh food. You can’t eat out every day. That’s very prohibitively expensive,” he continued.

Madeline Castro, a fourth-year geography major who lives at Pacifica Suites, said she was initially excited about moving into the hotel until she found the environment was unsustainable for the long term.

Without a roommate, Castro said the experience felt lonely. She said that there was a GroupMe for students living at Pacifica Suites, but the chat only had about 20 members and was not very active, making it hard for her to stay optimistic about her situation.

“I have to force myself to be active in that chat and to stay connected because it can get kind of lonely,” Castro explained. “I think it wasn’t until week four or five that I even saw so many people face to face … We were all just so very isolated. We’re all in our own little suites.”

The isolation from campus has also contributed to Castro’s academic stress, leading her to feel more tired and unmotivated due to the long bus rides and the difficulty of balancing schoolwork with looking for housing.

“The draining of energy that it takes from looking for housing and stressing about housing has made it hard for me to stay motivated,” Castro said. “I can’t even imagine how much better I would be doing in school if I just didn’t have to worry about housing or work.”

According to Student Legal Services Advisor Robin Unander, fewer students are living together in fear of close contact during the COVID-19 pandemic and more non-students have moved into Santa Barbara to work remotely prior to the beginning of the quarter. Both of these factors, she said, have resulted in less housing for students than is typically available.

“UCSB is out of compliance [with] the terms of the Long Range Development Plan [(LRDP)] based on their self-reported enrollment numbers and has not built required housing to keep up with their pace of enrollment,” said Gina Fischer, representative for Santa Barbara County Third District Supervisor Joan Hartmann.

Among students’ complaints is the university administration’s infrequent communication to those living in hotel housing.

“Communicating in general would be great,” fourth-year global studies and art double major Alyssa Gikkas told the Nexus. “They don’t want to tell us anything. I feel like they’re putting it off as much as they can.”

“It’s just hard to balance everything while worrying about where I’m going to be living for the next quarter,” Gikkas said. “I mean, it’d be nice if they could just confirm that we’re staying in the hotels or even online classes, like anything. If they can provide online classes, and I don’t have to be in Santa Barbara, that’s great, that’s fine.”

A week later at a housing crisis town hall hosted by the university on Nov. 16, Mario Muñoz, assistant director of University & Community Housing Services and Resident Placement & Assignment Services, confirmed the continuation of hotel contracts in response to a student’s question.

“I would say if you’re currently in a hotel and you continue to maintain eligibility … then you will be either offered campus housing or the option to stay in a hotel,” Muñoz said.

According to Muñoz, 280 students are currently residing in hotels, 169 have requested to be placed in campus housing, 50 students said they will not need university housing for winter quarter and another 50 have yet to respond to the university with their intent. The university charges students about $26 a day to live in hotels, but is charged around $175 a day by the hotels themselves.

“At this point, we are looking to prioritize moving the students who are in hotels into campus housing,” Muñoz stated.

Chancellor Henry T. Yang spoke briefly at the event and left shortly after without taking questions.

“We know that our process was not perfect and that this was a difficult transition for some of our students,” he said.

“There’s a lot of conversation of, ‘We’re hearing you,’ but there’s definitely a deficit in listening and taking it to heart … You should not have to have any kind of privilege at a university for people to listen to you so you can get some basic housing needs met,” Kiassat said.

With less than a month to go, the university has yet to officially contact students and let them know they will have housing going into next year.

The university has already begun moving students into housing outside of hotels. According to UCSB spokesperson Andrea Estrada, a number of students in hotels have been offered university housing as more spaces opened up on campus.

“A significant number of students applied for housing only a few weeks before classes started — well after the deadline — and the university wanted to give them additional time to find other housing. Many students originally in the hotels have been moved to available campus housing and others have found other permanent accommodations,” Estrada said in a statement to the Nexus.

In offering support to these students, Estrada said the university has offered online workshops and has helped students apply for housing elsewhere. However, she also said there are no concrete plans about providing hotel accommodations in future school years.

“We are looking into the possibility of extending contracts, but this is not a sustainable option for future years,” Estrada said.

Castro joined a Zoom workshop hosted by the university to receive assistance in applying for winter quarter housing and said she was the only student in attendance, with just her and the host, earning Castro a spot on the priority waitlist for campus apartments.

Castro was ultimately offered a room at Sierra Madre, but said many others did not have the same outcome.

“I’m just eternally fortunate that I was able to get a place at Sierra Madre, and so when I got that spot, I told people [in the GroupMe chat], ‘Hey guys, I’m not gonna be looking for a house anymore. I’m so sorry. I got a spot on campus. Hopefully you guys can find some as well,’” Castro said.

“I was really trying to be more transparent than the school was because they never told us how many students are being moved over or what rooms were [available] or how many, just to make it seem a little more hopeful, but absolutely not, they did not do that.

The LRDP “stipulates that the university must cap student enrollment at 25,000 until 2025. Fall Quarter enrollment is 26,179. What’s wrong with this picture? Could it be because the LRDP (Long Range Dimwitted Plan) “stipulates that enrollment will be calculated on a three-quarter average instead of just one individual quarter”. What could possibly go wrong?