UC Santa Barbara held a public town hall meeting in Corwin Pavilion to discuss the ongoing housing crisis affecting the university and the greater Santa Barbara County on Nov. 16 from 4 p.m. to 6 p.m. The town hall was held to respond to student concerns about the housing crisis, and during the event, administration announced their intent to extend hotel housing contracts for students into winter quarter. 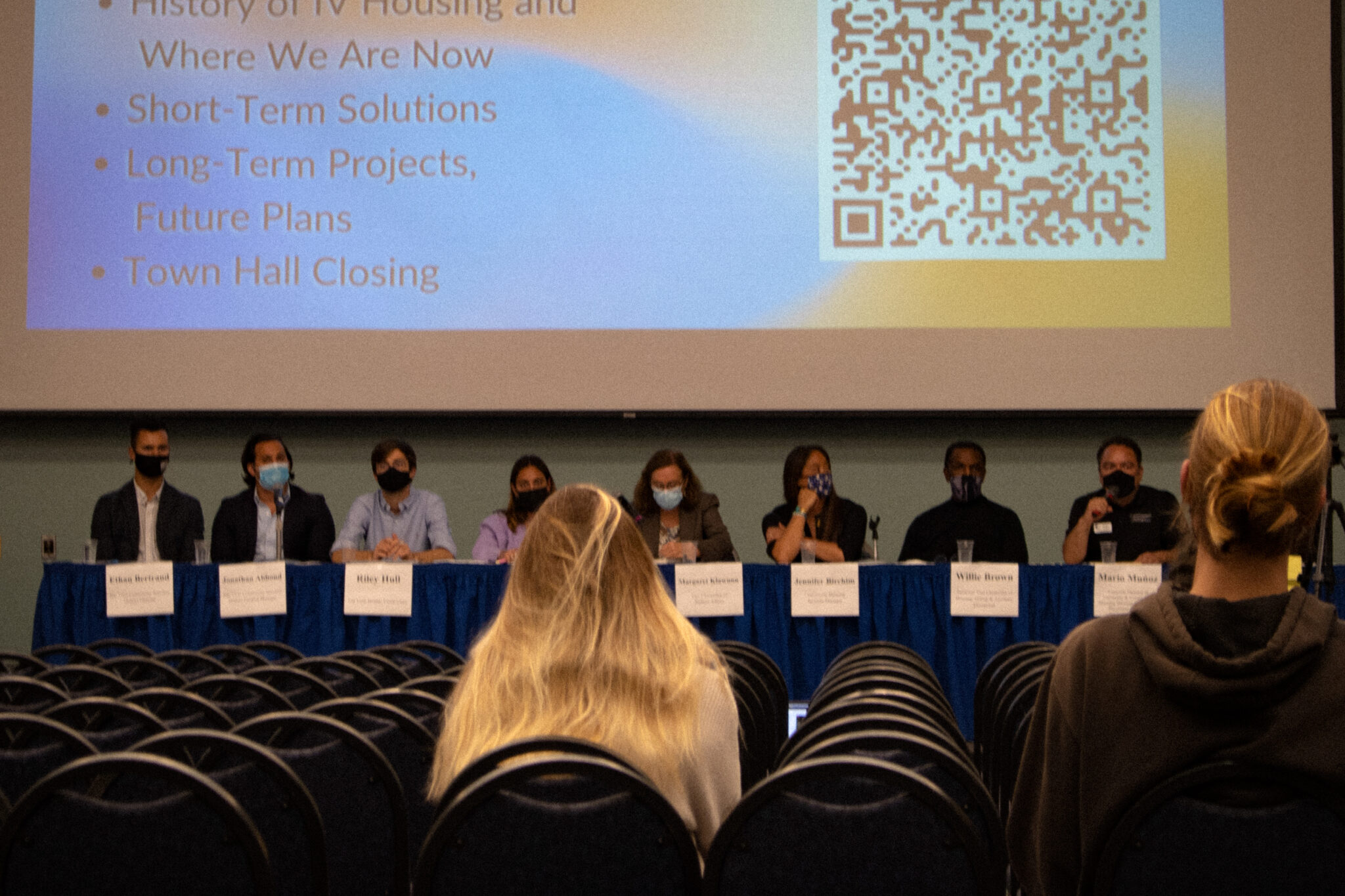 The event, coordinated by the Isla Vista Tenants Union in conjunction with the Associated Students Office of the President (ASOP), opened with an address from Chancellor Henry T. Yang, who thanked students for their flexibility amidst the university’s return to in-person instruction.

“It was your perseverance, your hard work, your determination and commitment that made our return to campus possible,” Yang said. “We know that our process was not perfect and that this was a difficult transition for some of our students.”

When asked after the event if he could answer some questions by the Nexus, Yang responded, “I’m driving to San Francisco, for the Regents.”

Mario Muñoz, panelist and associate director of University & Community Housing Services and Resident Placement & Assignment Services, shared statistics showcasing the lack of students currently studying abroad, expressing the belief that a potential increase in these numbers could ease the housing crisis. As the number of exchange students increases, more opportunities for students on campus will open, Muñoz said.

“I understand that they have a target for next year, 800 students being able to take advantage of participating in these kinds of programs,” Muñoz said. “So I think that will definitely impact the total number of students that are here in person. That’s going to make a big difference next year.”

When asked about the lack of communication to UCSB students, Willie Brown, the associate vice chancellor for Housing, Dining & Auxiliary Enterprises, said that though the university has good intentions, the execution of the transition into in-person learning had its issues.

“We could do better, and we’re still not learning from the same concerns from faculty and staff … we need to get better at doing that as an institution,” Brown said.  He ended his statement by reiterating, “I think our hearts are in the right place but our brains aren’t in the right ones.”

Those presenting advertised programs available to students needing assistance like CalFresh and UCSB’s on campus food bank, both of which aim to provide food security for all students on campus. They also mentioned a grant that students can apply for that would provide them with an internet hotspot.

During the meeting, the administration also announced their decision to extend university housing contracts to students living in hotels through Winter Quarter 2022.

At the beginning of the school year, UCSB offered hotel housing at a subsidized rate to over 300 students as a “temporary, emergency” solution in response to the unprecedented housing shortage. The contracts were originally set to expire on Dec. 15, leaving most students in hotel housing with no secure housing plans for the rest of the school year.

Muñoz confirmed the university’s decision to extend hotel contracts in response to a student’s question.

“I would say if you’re currently in a hotel and you continue to maintain eligibility … then you will be either offered campus housing or the option to stay in a hotel,” Muñoz stated.

Students have received little communication up to this point as to what the university plans to do in order to house them beyond weekly newsletters sent to residents, according to several students living in hotel housing.

“There are only 38 days until the end of your ‘Temporary Student Hotel Room Space’ agreement. It is crush time!!! If you have yet to find the housing you desire, it’s time to begin reassessing your options. You may need to consider plan B or plan C,” said the most recent newsletter obtained by the Nexus.

Muñoz said that of the 280 students currently residing in hotels, 169 have requested to be placed in campus housing. About 50 students said they will not need university housing for winter quarter and another 50 have yet to respond to the university with their intent.

“At this point, we are looking to prioritize moving the students who are in hotels into campus housing,” Muñoz said. “Our intent is that anyone who is currently in a hotel will receive an offer of either campus housing or an extended hotel contract into the winter quarter.”

The housing accommodations for students partly hinge on the university finalizing negotiations with local participating hotels, which should reach a resolution by Dec. 20, according to Muñoz.

“We’ve gotten preliminary verbal confirmation from all the hotels that they are interested in continuing the relationship,” Muñoz said. “[The hotels] still have to go through the contractual process with the campus.”

In addition, the university is hoping to reduce the financial burden associated with subsidizing students’ hotel stays.

“I think roughly our daily rate is $26 per head, and the rate we pay the hotels is about $175. So we have to reconcile that difference,” Muñoz said.

The university hopes to mitigate this cost by placing as many students as possible in university-owned residence halls or apartments, according to Muñoz. He also said that there is a possibility the university extends the hotel contracts through Spring Quarter 2022 but stopped short of making any commitment.

“The hotels have actually been very amenable … we should expect we’re going to have those hotels probably, really for the remainder of the year,” Muñoz said.

Throughout the night, students asked questions to the representatives present, including questions about Munger Hall during the section of the meeting dedicated to long-term projects at UCSB. Munger Hall has generated nation-wide criticism for its lack of windows, and many UCSB students voiced their input on the potential harm that the building could cause to students’ mental and physical health.

The town hall ended with a statement from fourth-year anthropology major Sarah Hamidi, who discussed her frustrations with the school’s lack of response and communication with students impacted by the housing crisis.

“I’ve never seen such horrible communication in my life. It’s a horrible lack of transparency, as everything was communicated to me at the last minute,” Hamidi said. “I am embarrassed and ashamed to come from a school that does not care about me.”