The Daily Nexus
The Daily Stench
Sad! Library Chairs Haven’t Felt a Fart in More Than a Year
May 10, 2021 at 4:20 pm by Emma Demorest 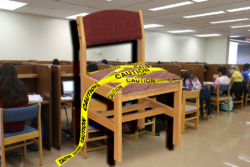 Many tragedies have befallen campus since it’s abandonment a year ago, but none greater than the plight of the Library Chair. Known across UCSB as places to possibly sit, the library chairs currently face near extinction due to the lack of farts they used to sustain on a daily basis pre-pandemic.

As is known, a single Davidson chair withstands roughly 50-213 farts per day, thus the sudden quarantine last Spring proved especially difficult, and left many chairs to experience sudden withdrawals. At this time, researchers are unsure of how functional the Davidson chairs will be after many months of disuse and, more significantly, the lack of farts sustained.

“What we’re seeing is a lot of chairs kind of shriveling up in the cushion part,” Davidson custodian and chair expert Frank Todd said. “Without the farts, they really lose all the life in them.”

Experts like Todd said they weren’t prepared for the rehabilitation and care the chairs would need to receive as a result of the lack of flatulence. Currently, UCSB has dispatched 15 of their gassiest employees to spend time sitting in as many chairs as possible, but it simply isn’t enough.

With time against them, it seems the failing conditions of the chairs prompted the University to open Davison’s doors at 23% capacity last month. If unattended, the lack of flatulence would lead the chairs further into disrepair, causing the school upwards of 10,000 dollars in damages — a cost the University just can’t cover.

How can you do your part? Todd said any fart counts. “Once you get back in there, really give whatever you can. Big loud ones, silent long ones, little bit juicy, doesn’t matter. These chairs need farts, and they need them fast.”

This article won Emma Demorest “Best Coverage of a Breaking Story, 2021” from the Jack In The Box Center For Hot Journalists.