The Daily Nexus
Nexustentialism
It's satire, stupid.
Dining Halls Ranked by Someone Who Hasn’t Been to Any of Them
April 27, 2021 at 4:20 pm by Kathleen Santacruz 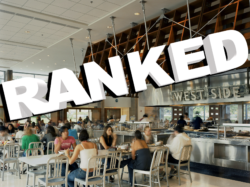 NOT ISLA VISTA — As the new school year approaches, projected to hopefully be slightly better than this one, anticipation is rising among UC Santa Barbara students who have chosen to stay at home during the pandemic. With many of these students being freshmen who have never been to campus, we at Nexustentialism decided to lend a helping hand and provide a ranked list of UCSB’s infamous dining halls, made by someone who hasn’t been to any of them.

Carrillo ranks #1 on my list for looking vaguely like the food court at IKEA. The only letdown was the spelling of froyo as “Fro yo” on the UCSB housing website, but it was compensated by the promotion of diversity through pride chairs. 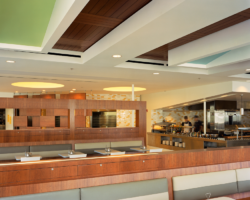 De La Guerra ranks second on my list for actually looking like a food court — despite looking like it serves continental breakfast. The late-night service boosted its ranking as well — a necessity for the reserved life I anticipate living as a UCSB student in the small, quiet beach town that is Isla Vista. 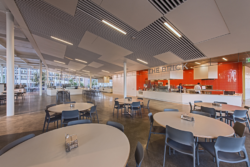 Portola very strongly reminded me of an airport, a stark contrast to how its outside looks like a gym. Points were gained for seating booths but were deducted for including on the housing website that it serves “spicy ketchup.” Just use Sriracha, you cowards. During my research, I discovered that “The Brick” did not actually appear to be brick and was instead made of hipster bathroom tiles. Portola received negative points for lies.

I didn’t know whether to include this or not, but Tenaya Market was included on the housing website’s list of eateries, so here it is. It ranks fourth because it’s probably not supposed to be on this list and looks like a pop-up Whole Foods. 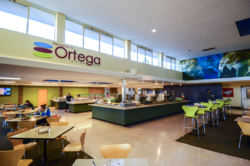 Ortega looks like a hospital cafeteria, which is not the ideal vibe. Its minimalist style is a meager attempt at trying to compensate for looking like a dorm from the outside and only further makes me associate this dining hall with a hospital. Points were deducted for the mural. Ortega also overwhelmingly looks like it stoops to the lowest levels of humanity and makes its eggs from a box.

Kathleen Santacruz eagerly awaits finding out what to associate with the name “Joe Gaucho” in the fall.