The Daily Nexus
The Daily Stench
6 People Covid Partiers Can Look Forward to Meeting in Hell
April 16, 2021 at 4:20 pm by Sam Penn 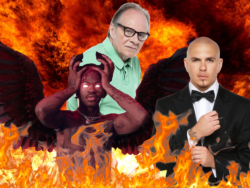 ISLA VISTA — Deltopia weekend proved that a merciless virus could not stop Delaneys and Chads alike from indulging in the spoils of UCSB’s most heinous, most sacred holy day. Isla Vista’s COVID partiers have made it clear that drinking on balconies and drinking on roofs (and – let’s face it – angering the PH in some Shein bikini) is more critical than the health and safety of their peers. And why shouldn’t it be? We at Nexustentialism believe that going to heaven is overrated, so here are some of our favorite residents of hell that Deltopia attendees can get excited about seeing in the burning inferno below!

As hell’s sexiest resident, COVID parties can hope to catch the artist at weekly pole-dancing classes, so along with the tortures of eternity — that’s something to look forward to.

COVID partiers should keep an open ear for Youtube’s favorite apology-maker James Charles’ warm “hey sisters!” upon entering Dante’s heated swamps. Plus, you’re now required to get James’ haircut once admitted for eternity, so you’ll have two things in common!

Problematic has-been Joe Gaucho didn’t fall to hell for all the reasons you’d think. It was actually his consistent infidelity that did him in. Good thing Gauchos will see a familiar face once they cross the bridge of no return!

I mean he’s just kind of a disagreeable guy; you knew that already.

Rated Isla Vista’s Most Homophobic Landlord five years in a row, Jelb is as gross as his last name sounds! Be sure to cross hell’s heated streets whenever you see this guy coming or he might lash out. Who knows? He’s done it before!

In actuality Pitbull has done nothing explicitly wrong to land him in hell. Heaven just didn’t seem like the right place to put him.

Sam Penn wants to emphasize that hell ISN’T real and that this IS a joke, except the Pitbull part.