The Daily Nexus
On the Menu
The Quest for the Perfect Gluten-Free Nugget
November 7, 2020 at 7:38 am by Chace Duma

I love to cook, but especially with classes having started up again, sometimes I’m just too lazy to get in the kitchen. After a busy day, it’s easier to throw a bunch of frozen chicken nuggets in the oven and have a meal ready after a few minutes of pacing around the kitchen than it is to plan, prep for and cook a whole meal. Luckily for us gluten-free folks, there’s been an explosion in the GF chicken nugget market in recent years. So I, a martyr for my cause, took on the immense responsibility of stuffing myself full of different brands of GF nuggets to bring a ranking of the more readily available brands to the masses. 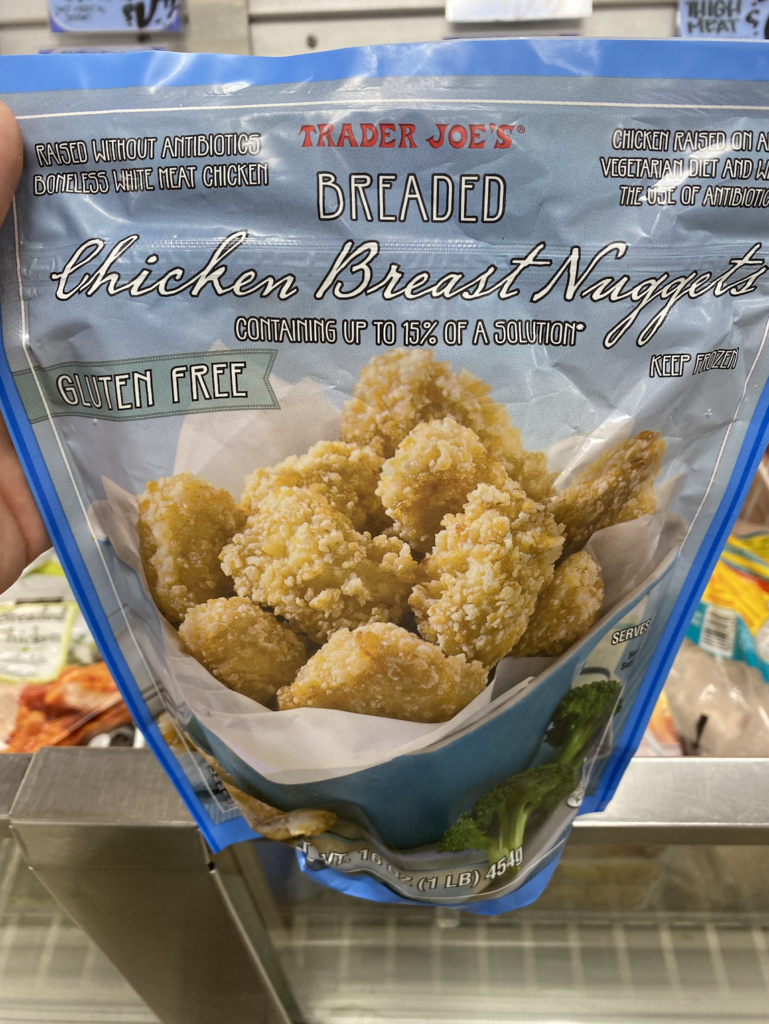 For many, walking through the freezer aisle at Trader Joe’s is like walking through a vast and wondrous Eden, surrounded by delicious frozen delicacies promising that, as long as you own a microwave, you’ll never have to cook again. But for somebody who is gluten-free, it’s like walking through a hallway of people shouting, “Hey! Look at this delicious food you can’t eat!” and stuffing their faces full of orange chicken, maintaining direct eye contact. But wait … what’s that? Ah, a glowing oasis in a wheat-laden desert: Trader Joe’s gluten-free nuggets. Our friends at Trader Joe’s have officially titled them “Breaded Chicken Breast Nuggets,” which seemed a little pretentious to me. Nuggets have, and always will be, a humble food. However, I was able to separate the nug from the name and take an unbiased look at these little morsels. Verdict: They’re pretty good! They come raw, which might be a little inconvenient if you don’t have a meat thermometer. However, if you turn them halfway through and cook them as per the box instructions, they end up at around 190 degrees, far above the safe temperature for chicken. The breading was thick and well seasoned, but it was a little bit chewy. This chewy texture may be your thing, but it wasn’t mine, and I’m the one in charge here so I had to knock off a point for that. The flavor of the breading was pretty solid; it’s well seasoned and you can taste the other spices used, like garlic powder. Overall, these are solid nuggets but lose points in the texture of their breading and the extra care it takes to cook them. 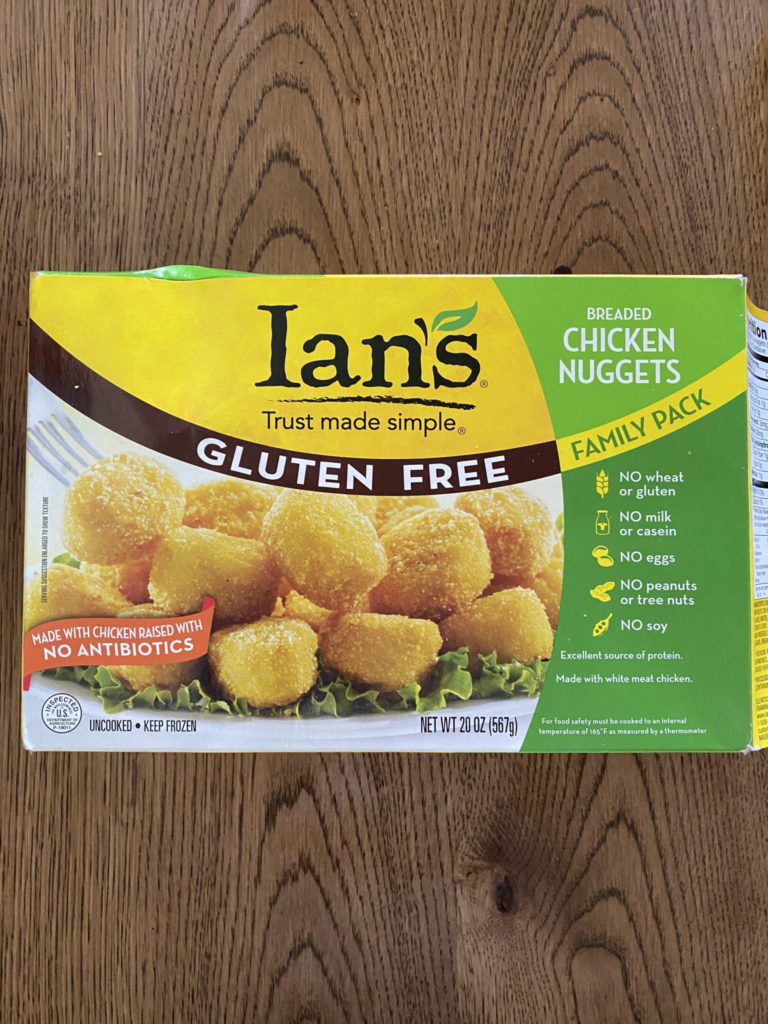 Considering I purchased these at Sprouts, which sells their own far superior brand of GF nuggets, there’s not really a reason to buy these. Like the Trader Joe’s ones, these are not pre-cooked. However, putting them in the oven at 400 degrees for 14 minutes, as recommended, will render them safe by a margin of 30 degrees, so no worries there. The breading isn’t seasoned very well, just adding a bit of salty flavor to the chicken. However, it is really nicely textured with a great crunch. Unfortunately, the texture of the inside was … not ideal. Despite being cooked to around 190 degrees, it was very moist. Not in the “perfectly cooked chicken” kind of way, but rather in the “did somebody accidentally spill water on my nugget?” kind of way. No thanks. 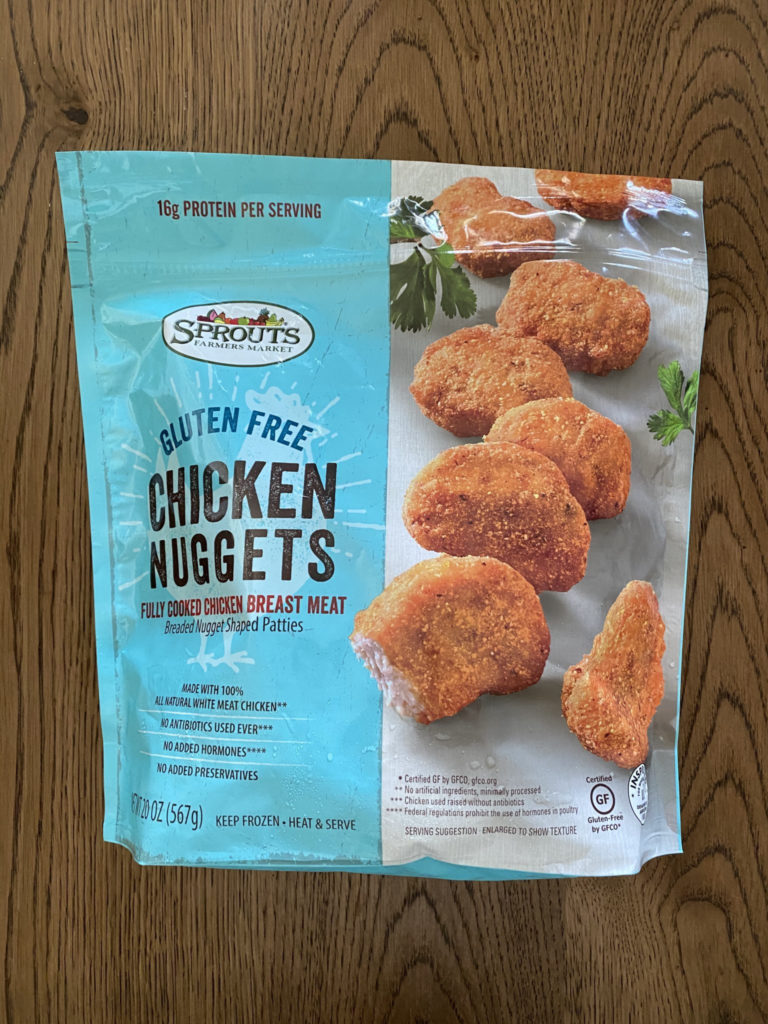 Two things struck me about the Sprouts nuggets: for one, their size. For some reason, all of the gluten-free nuggets I had tried in the past had been around the same, underwhelming size. These bad boys were heftier. Nugs with a capital N. This extra size worked really well in their favor as it created more surface area for the breading, which was the second thing that struck me. The breading was by far the most delicious out of any in this group. I usually eat my nuggets with a side of yellow mustard, but honestly, these could be eaten without your dip of choice and you’d be perfectly satisfied. They’re salted perfectly, and you can actually taste the spices listed on the box! My one gripe with these nuggets was the texture of the breading, but that falls on me. The box instructs you to flip them halfway through their tenure in the oven, which I scoffed at and entirely ignored. The side that was facedown ended up a little mushy instead of crisp. I won’t take points away for that, though, because it’s a product of my laziness (a problem that lies far deeper than what can be revealed by the ingredients list on a box of chicken nuggets). 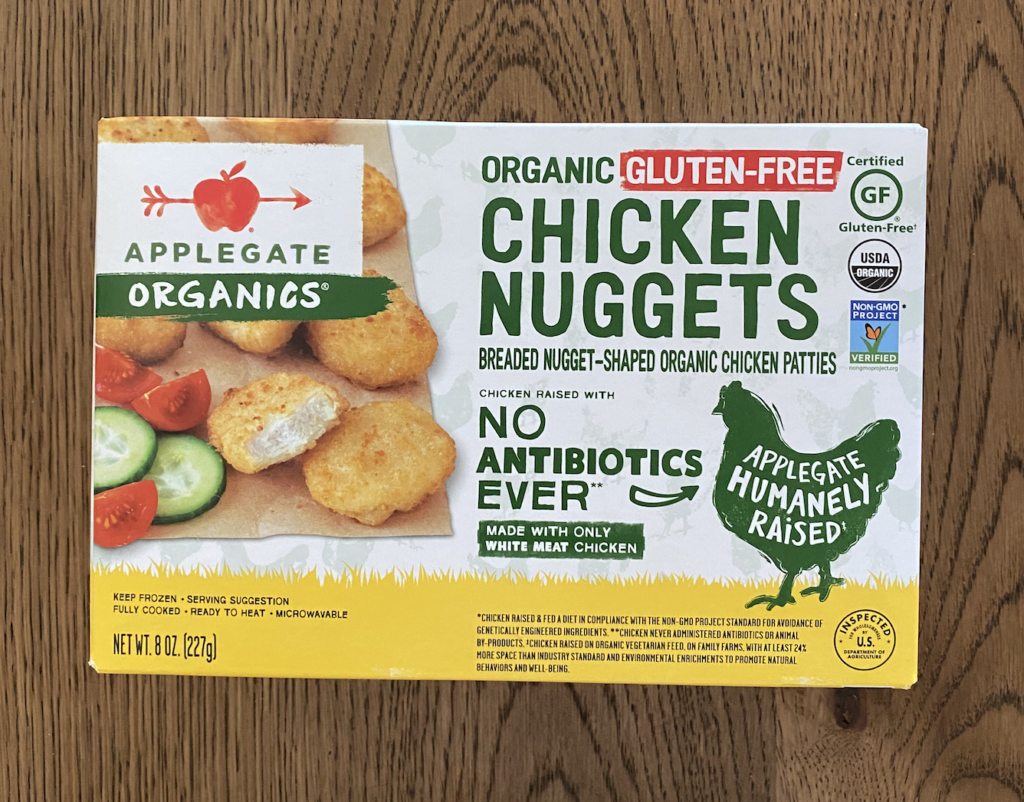 While I think the Sprouts brand nuggets are a little tastier, I’ve put the Applegate nuggets at a tie due to how committed Applegate is to sourcing sustainably raised meat. They tout their use of humanely raised chickens on the box and give a spiel on the back about how they source their meat from family-owned, responsible farms. I try to buy responsibly raised meat whenever I can and am a big supporter of sustainable farms, so I give huge props to Applegate for making it a priority. Unfortunately, this comes with a price increase, but I say it’s worth it. The nuggets themselves are pretty solid! They’re a little smaller than the Sprouts ones, but their breading is tasty and never comes out soggy when cooked according to the directions on the box. The texture of the inside is great as well. I love to eat these ones with some yellow mustard, but on my laziest and mustardless days, I have eaten them plain and they hold up on their own. These are a great choice if you’re looking to eat some nuggets and save the planet at the same time.

I hope that the next time you’re at the market, this guide makes your nugget quest a little less directionless. However, these are just my preferences. And while I’d like to believe that I have the final say when it comes to gluten-free nuggets, everybody has their own tastes. Feel free to go on your own nug-fueled odyssey and find what works for you. Worst comes to worst, you get to eat a lot of chicken nuggets.