The Daily Nexus
Nexustentialism
It's satire, stupid.
Student Dismantling Police, Taking Down Murderers and Battling a Pandemic Still Had Poetry Final for Some Reason
July 22, 2020 at 4:20 pm by Sam Penn 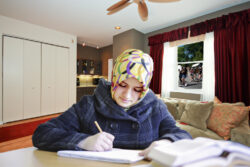 Though seemingly carrying the weight of the world on their shoulders and making sure that the planet as a whole doesn’t burn and die and the people on it stop killing each other for literally no reason, Gen Zers everywhere can’t forget what’s most important: school. Nexustentialism turned to UCSB student Jessie Batal to see how she enjoyed her finals week during this tumultuous time.

“Sure, I’ve been busy checking in on my friends, having hard conversations with my family and protesting while also trying not to get COVID, so it’s actually really great that I had to work on final essays and a group project over Zoom,” stated third-year poli sci major Batal.

The mindless busy work, bullshat class discussion forums and multiple analytic essays about necessary, urgent concepts (such prompts include: “Contrary to popular belief, did Elizabethan poets have the capacity to write about humanistic subjects as much as greek authors?” And “was Shakespeare gay?”) proved a great way for Batal and her fellow classmates to really relax and take their minds off of advocating for basic human rights.

Batal, who wakes for each day more tired than she ended the last, thinks that it’s great that her professors trudge on with their lesson plans made way back last fall when there wasn’t a pandemic and peaceful protestors weren’t being kidnapped by what can only be described as federal officers in Call of Duty cosplay.

Batal says that though her workload hasn’t been altered, her professors are really running with current events to stir some meaningful class discussion. “In my Shakespearean poetry class, the professor asked, ‘What would the poets of yore say about today’s current events?’ I took that opportunity to take a step further from muting myself and went ahead and turned my camera off at that point.” Batal also noted that the only reply to this question the professor received was a “:(” typed into the Zoom chat.

“I ended up getting a B on my poetry final because it ‘seemed rushed’ according to my professor,” Batal said, “which is too bad, because the thing I really need the most right now is definitely more time with an Elizabethan sonnet.”

Sam Penn is personally glad he could continue sculpture 101 through zoom this quarter.