The Daily Nexus
The Daily Stench
UCSB To Have In-Person Zoom Classes
June 19, 2020 at 4:20 pm by Natalie Kothergirls 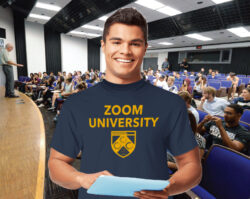 The University of California has recently made the landmark decision to embark into a new frontier of educational possibilities: The Zoom classes utilized for remote instruction during the Spring Quarter 2020 will soon take place in person.

“If we’ve learned anything from the Spring Quarter 2020,” UCSB official DJ Talerning said, “it’s that everybody loves Zoom. We know this because of all the people who said they loved it. A survey conducted by UCSB researchers even showed that 100% of UCSB students loved their Zoom classes.”

When asked about the sample size of this survey, Talerning quickly changed the subject.

“I like that I don’t have to wear pants!” said the only kid who took the survey, holding up the Amazon gift card he won for participating.

“We just really wanted students to be able to relive this period of togetherness, you know? The idea that we were all together even though we were physically apart,” Talerning declared, denying any claims that his golden idiom was “bullshit” and “literally just wrong.”

Talerning showed off his pearly whites as he exclaimed, “So that’s why we’re so excited to bring Zoom classes to the UCSB campus! Just like in a Zoom call, students will be able to interact with their professor and other students, but now, it’s in person!”

When asked how this differed from normal in-person classes, Talerning burst into tears, screaming at our Nexustentialism field reporter, “Why would you fucking say that?” — before running out the door and scootering away, only to be stopped by a CSO (because those guys are still around for some reason) and being told that scooters aren’t allowed on the bike paths and getting fined for one billion dollars.

Students were naturally curious as to when these new classes would arrive at UCSB. “Where’s the drama in that? You’ll know when you know. Have a little patience. Be a little grateful. The suspense is part of the process,” Chancellor Yang answered.