The Daily Nexus
Nexustentialism
It's satire, stupid.
Not to Worry! Times May be Changing, But This Professor’s Grading Scale Absolutely Will Not
June 17, 2020 at 4:20 pm by Emma Demorest 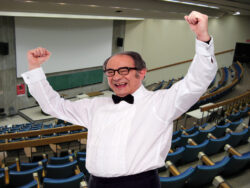 Physics professor Rick Beeker readily told Nexustentialism sources this week that he would not be easing up on his grading come finals.

“I mean, are we facing major, necessary systemic changes as a country? Sure. Do we live our lives differently because of a deadly untreatable virus? Of course. That’s why I think it’s so important that amidst all this change, at least my students can rely on my age-old, hard-assed grading scale.”

Beeker, an infamously tough professor with TAs spawning from the depths of Davey Jones’ watery grave, said that providing students with some much needed “normalcy” during this time was the least he could do.

“When students are taking my tests, I want them to feel that cold sweat and the dizziness that comes with absolute fear, just like old times.”

Beeker does not seem to have considered the fact that this might in fact be the opposite of what his students were hoping for, but this misreading seems to be a constant in his teaching practices.

“When students ask me if something from a lab will come up on the final, I like to shrug and say nothing. I think they like it too, a little riddle, just for them. It’s also helpful, as a teacher, if you can start a sentence and then just keep it going until no one knows what you’re saying anymore, and you forget the question you were originally asked. I think that’s what keeps my students coming back for more.”

We at Nexustentialism did not have the heart to tell Beeker that his pupils keep coming back because he keeps failing them.

Emma Demorest has proudly never taken physics, or even a single math.