The Daily Nexus
Nexustentialism
It's satire, stupid.
Honors Program Now Accepting Students Who Can Bike With No Hands
January 20, 2020 at 4:20 pm by Max Myszkowski 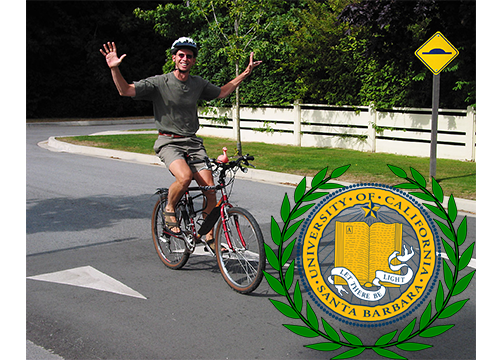 In a statement released this afternoon, the UCSB Honors Program announced it would be automatically accepting all applicants who can ride their bikes with no hands.

“It is our belief that students who have mastered the skill of riding their bicycles without the use of their handlebars are clearly a cut above the rest of the school’s student population,” the memo read. “They will be automatically accepted into the Honors Program and also given a complimentary high-five for looking so damn cool.”

Students previously admitted to the program on the basis of their academic performance have reportedly been alloted a three-week grace period to pick up the no-handed cycling technique or will otherwise be dropped from the program.

Some students have expressed distaste for these new qualifications, asserting that they are inherently elitist and disproportionately underrepresent students from non-cycling backgrounds, such as those preferring skateboarding, scootering or, god forbid, walking as their primary mode of transportation.

“Yeah that’s been the point the whole time. Maybe put some miles on your pedals and then we’ll talk,” the Honors Program replied in response to these allegations.

Students who can ride a Lime scooter with no hands will be granted provisional acceptances to the program on the basis that they begin training hands-free cycling before the end of the quarter. Students who can bike one-handed will be allowed to remain in the program if previously admitted based on academics, though they will be required to pass a written exam on the badassery of living dangerously.

“Look Ma, no hands!” one Honorable cyclist shouted before veering off the bike path and into some nearby shrubbery. This was momentarily followed by a weak, though clearly strained “I’m ok.”

Conversely, students who ride their bikes with both hands and also wear helmets while doing so will be dropped from the university entirely.

Max Myszkowski has crashed his bike four times this year, all hands-free.