The Daily Nexus
The Daily Stench
Rate of Seeing Ex-Lover at Lib Climbs to 200% as Finals Approach
December 7, 2019 at 4:20 pm by Sam Penn 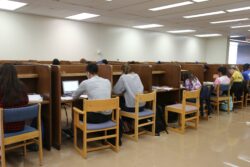 In a recently published study, UCSB researchers estimate that the rate of crossing paths with your ex-lover at the library has climbed to a staggering 200% as finals draw near. The team notes that the stats will no doubt continue to climb, reaching their peaks from 5 p.m. to 1 a.m. every day until Thursday.

“We’ve done extensive testing in the past couple weeks,” Paula Gordon, a member of the student-led team, said. “Frankly, the numbers are frightening. Approximately one of every two students will have a bad run-in.”

This is compared to a one-in-70 run-in rate during the first two weeks of every quarter.

“I hooked up with this girl five times, until I farted during sex one time…I think she heard. I sat down at a table on sixth and there she was, right across from me! I booked it. The only place I felt safe was right here, so I’ve been studying in this spot ever since.”

It should be noted that Sucker’s “study spot” is the handicapped stall of the second floor bathroom.

Some Gauchos have decided to take their chances, like third-year student Sadie Tran.

“The elevator door opened on seventh, where I saw Kyle, who I dated for like two years. I think he was actually trying to get on the elevator but I ended up pressing the ‘close door’ button so frantically it actually closed on him.”

Tran went on to say she would study elsewhere, but at this point the lib is all she knows. “What am I supposed to do? Go to the SRB?”

Gordon and the research team also noted that side effects from the increased rate include dodgy eyes, an inability to truly focus and “walking in a way you think makes you look cool but probably actually makes you look stiff.”

When asked for comment on the effects of these run-ins on students’ academic performance, Gordon said “Oh shit! There’s that guy from Tinder I’ve been trying to ghost for three weeks,” before jumping out of a first-floor window into some nearby shrubbery.

Sam Penn doesn’t mind knowing the girl sitting at a nearby desk on fourth has seen his penis.