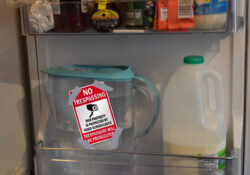 Reports are streaming in that second-year student Ava Turst reportedly used her roommate’s “goddamn” Brita filter without filling it back up afterwards. This allegation falls in the wake of several other scandalous claims, such as those implicating the water-thieving roommate in a series of recent disappearances, most notably those of her roommate’s last stick of string-cheese and the desecrated remains of an order of Freebirds nachos.

“God damn it!” the owner of the filter exclaimed, “All I ever do is fill this Brita up, and every time I come to the kitchen looking to treat myself to a cold, filtered glass of Goleta’s finest, I’m confronted with the dessicated husk of the Brita I once knew,” cried the inconsolable, dehydrated man.

At press time, the perpetrator declined to speak with Nexustentialism staff, expressing a desire to speak with a lawyer before making comment on these allegations. Bystanders, however, were eager to offer their takes on the situation:

“She’s GUILTY! I know it!” seethed the victim of the filter-fiend. “I’ll bet she drank the last of my OJ, too –– that filthy scoundrel,” he added before being reminded that he, in fact, had chugged the remainder of the pulpy beverage in a last-ditch effort to ingest some electrolytes after a night out.

While the jury is still out on whether Turst will be allowed to continue using her apartment’s communal Brita filter, word from other tenants is that things are not leaning in her favor.

“It’s basic manners, man. You gotta give a little if you wanna get a little,” said shriveled apartment mate Sarah Watters. “People like her are why communism will never work,” she added, shaking her head and clucking softly as Karl Marx did a somersault in his grave.

Since her conviction, Turst has reportedly promised she would change her parasitic, water-guzzling ways, but close friends and family have remained skeptical.

“I don’t even think she knows how to refill it,” one withered housemate told Nexustentialism.

Whether or not Turst is ultimately found guilty and forever banned from the sweet, moist embrace of the Brita’s spoils, this verdict will set precedent for future cases of beverage misappropriation and serve as a landmark case for water drinkers everywhere.

Max Myszkowski believes a full Brita is a symbol of fertility and prosperity.