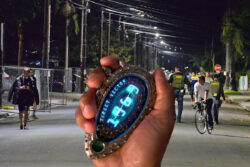 The realities of modern I.V. Halloween conditions drew sharp criticism this week when a temporally displaced traveler drew a comparison between late October Isla Vista and the dystopian world imagined in Orwell’s 1984.

Xen◱r Kᕬllensᢱth recently time traveled here from the year 3442 and to his dismay, was astounded to find an authoritarian police state where he thought pre-climate disaster Santa Barbara would be.

“I thought this was a quaint little beach town, but instead I found what looks like some kind of oppressive hellscape,” Kᕬllensᢱth said through his translator. “Based on what I know about pre-heat death history, my transporter must have malfunctioned and taken me into the world of some poorly written post-apocalypse novel.”

Kᕬllensᢱth only grew more confused when it was confirmed that this was in fact the central coast of California in the 21st century rather than fictionalized war-ravaged mid 20th century Eurasia. “But what about all the fences and the huge police presence?” asked Kᕬllensᢱth. In response, the Isla Vista community just shrugged.

Kᕬllensᢱth is looking to get a refund on this vacation, seeing as I.V. at this time of year is more “conform to the party” than “let’s have a party.”

“I wanted to catch some good vibes, not get sent to room 101,” said Kᕬllensᢱth.

A. Wiessass thinks Chancellor Yang is cuter than Big Brother.