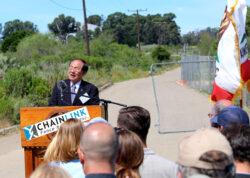 As Halloween approaches and annual chain-link fences have suddenly sprung up around I.V. like skeletal sheets rising from their graves, a series of recent investigations have revealed Chancellor Yang to be nothing more than a puppet figurehead actually controlled by the immense power and influence of the chain-link fence lobby.

This revelation has sent shockwaves throughout campus as the ideal image of the once-beloved chancellor has now been shattered by the cold, hard reality of his unscrupulous dealings. Students everywhere are lamenting the previously untarnished reputation of their cherished chancellor in the light of recent events revealing him to be nothing more than a corporate shill.

“Innocence never lasts, does it? Is there one good man left in this accursed realm we inhabit?” one student wailed into the abyss off the edge of Campus Point.

Representatives from the Chancellor’s office have declined to comment on the contributions of chain-link fence lobbyists to the funding of projects conducted by the administration, though they did recently release a statement on the issue that read as follows:

“Chancellor Yang and the Office of the Chancellor believe the implementation of these fences are integral to the protection of UCSB students from the dangers associated with the ‘litness’ of Halloween activities. Additionally, these barriers will serve as protection from a variety of dangerous fauna commonly found in the Isla Vista area, including (but not limited to): murderous mountain lions, rabid raccoons and perilous possums.”

The statement went on to describe UCSB students as “often drunk idiots” and that the fences served dual roles by “keeping students in and keeping [Halloween spirit] out.”

Yang himself allegedly ordered the erection of additional fencing all the way down the median of El Colegio Road under the pretense of preventing FT residents from drunkenly jaywalking, even though it’s abundantly clear that nobody in FT has both alcohol to consume and addresses to cross the street in pursuit of.

While the reputation of our highly esteemed chancellor is tragically forever tainted, Yang still stands for many as a shining beacon of wholesome leadership despite his transgressions.

Max Myszkowski would die for Chancellor Yang if asked to do so.