The Daily Nexus
The Daily Stench
Freshman Gets Trapped in Middle of Storke Tower Bike Loop, Has Panic Attack, Is Rescued
October 10, 2019 at 4:20 pm by Kian Karamdashti 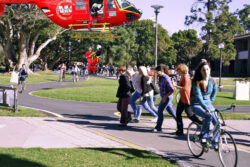 In what was certainly a jarring experience, Isla Vista Foot Patrol, the National Guard, Navy SEALs and the local SWAT team were called in to rescue freshman student Francisco Torres after he became trapped in the middle of the bike loop by Storke Tower during rush hour.

“I honestly have no idea what he was thinking,” Police Chief Brett Oinkerson said. “In all my years on the force I have never seen such a stupid and perplexing act by a student.”

According to eyewitnesses at the scene, no one is exactly sure how Torres ended up in the middle of the bike loop. It was as if he appeared out of thin air.

“Our group was walking to the library from HSSB, when he suddenly disappeared,” Torres’ friend Luke Fresh said. “We didn’t know where he went until we heard a primal scream for help.”

Once Torres realized he was trapped, he proceeded to take off his shirt, roll up into a ball and repeatedly ask people passing by to contact his RA so she could save him.

As bikers continued to fly around the loop at top speed, it became clear that an on-the-ground rescue was not going to be possible.

“We did not feel comfortable sending our men on a mission that would most likely result in casualties,” an executive statement from the White House read. “It is with this realization that we decided a helicopter was the only logistical way to protect American lives from the bike loop.”

At approximately 1:54 p.m., Torres was airlifted out of the Storke Tower bike loop without disrupting rush hour traffic.

“I’ve deactivated 25 live bombs, and I must say this mission was 10 times more difficult,” one Navy SEAL said. “Impeccable work.”

When contacted, Chancellor Yang had only one brief comment: “I hate freshmen.”

Kian Karamdashti wants you to be safe while all the freshmen learn how to ride their bikes during week one.

Dude go write about important issues on campus instead of wasting your time on this absurdity.