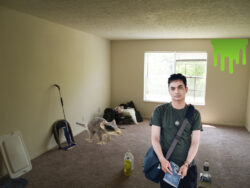 Isla Vista, Calif. — Having recently moved into his (and his eight roommates’) new apartment on the 65 block of Sabado Tarde, second-year student, Jacob Greene, finally got a good, close look at the property he had previously seen only in photos on the leasing agency’s website. Upon conducting his primary inspection of the sparsely furnished living space, Green realized — with equal parts embarrassment and disgust — that his new residence was a complete and utter shithole.

“The water pressure is garbage, the paint’s peeling off the walls and the whole place smells like a basket of ass,” the previous freshman said, regarding the condition of his new home. “The only happy tenants here are the cockroaches — of which there are many,” he added, pausing to squish one of the freeloading pests with his shoe.

Greene’s roommates had similar complaints about their new living situation, adding noisy upstairs neighbors, a family of racoons who had taken up residence in their dumpster and a homeless man who had moved in alongside them.

Greene and Co., who started their search for housing two weeks before the end of spring quarter, were surprised the building had not been condemned — especially given the pungent black mold in the shower, leaky ceilings and ominously and ominously stained walls (blood?).

The rental agency in charge of the property, which explicitly forbade Nexustentialism from publishing their name (though it rhymes with [insert shitty landlord here]), has reportedly already spent Greene’s security deposit on purchasing another property in the area.

“The place was absolutely spotless when they moved in,” a representative from the agency claimed. “We actually just renovated that specific unit — it’s nicer than ever,” he said, referring to the recent installation of a single lightbulb hanging from a bare wire above the kitchen sink.

Greene and his numerous roommates considered finding a new place to live, but then remembered they all signed a legally binding, year-long lease without reading it first.

“Yeah, but who reads the terms and conditions, anyway?” Greene’s roommate said, casually shrugging as if his repulsive living situation had been completely unavoidable. “C’est la vie, amirite?”

At press time, the family of raccoons had been welcomed in as subleasers of the zero-star abode.

Max Myszokwski does not currently live in a shithole, but he did last year.